The Soviet Utopia: sending your hard-working state citizens on a health holiday to one of the empire’s many sanatoria. Originally conceived in the 1920s these USSR sanatoria offered a combination of health & medical benefits alongside thermal baths and spas. These institutions were once amongst the most innovative buildings of that era.

The system was brilliant: holidays were booked through a state-funded voucher system. Guests of sanatoria were carefully monitored by health professionals during their stay. The Soviet worker returned home with renewed strength, in good health and full of energy.

For this series I photographed many of the remaining sanatoria in Georgia and the de facto state of Abkhazia. These magnificent buildings became curious relics of the former USSR. Many of them are abandoned and no longer serve any purpose other than being vestiges of another era.

It’s heartbreaking to see the ruins of these grand buildings left in dismay. But they’re not completely abandoned: these crumbling complexes now house over 9000 refugees whom were displaced from their homes during the Abkhazian-Georgian war. These people made a new home amongst the debris of the ruins. Some have access to water, some have electricity, some have basic comfort, but there’s one thing these refugees don’t have: a clear outlook on what the future will bring. Meanwhile, they remain in exile. 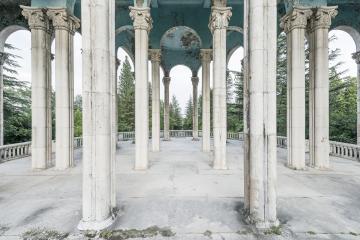