“If Trump were a woman … My body is political”

I’ve been always fascinated by Donald Trump, not for his intelligence neither his generosity but don’t ask me why I’ve been tracking him for years. I started to follow him since his entry at the “Casino business”, real estate and showman with “The apprentice”. His way of doing things, talking, moving kept on inspiring me for a photographic series with a conceptual touch. His campaign was so absurd , his speeches so surreal. He was a live inspiration … As an artist I couldn’t miss this one !

When he won the American elections, I told to myself : There you go, this is the sign I was waiting for, he will be the theme of my next series ! My new work is called “ If Trump were a woman … My body is political”. It means that I use my own body and the body of another woman to express how it would look like if he were a woman. All the images are based on his own quotes. I watched, read and listened all the available interviews, videos and articles about him. Hours and hours of acknowledgment of his thoughts which were transformed in images.

In fact everything would be different if he were a woman !
He would never been elected for president !

If Trump were a woman “her” story of bankruptcies would indicate that she shopped too much.

If Trump were a woman grab a men by the nuts would be seen as a non suitable behavior. 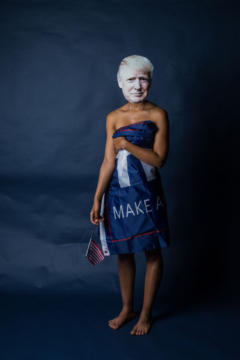 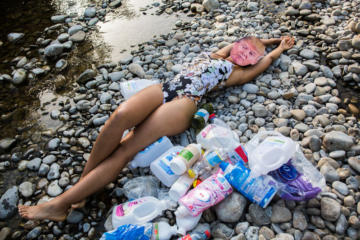