I went back to Milan Expo 2015 during the dismantling, during the event I got commissioned several photo reportage and I had literally to fight to find a good position to shoot the pavilions, now I walk alone along the empty Decumano.
The site seems to be a post atomic landscape; the metal devouring machines and the giant saws suddenly interrupt the unnatural silence and remind me the reason of my visit: document the last phase of the Expo process.
Countries were committed to leave the plot as they received it, but unfortunately many buildings are being destroyed and not dismantled as the organization promised. Some pavilions have evaporated, on the ground some sign of the foundations and mud; others lie ripped, someone else seems to have been bombed, but it stoically stands.
Volunteers rescued many plants but the green, that cannot survive without artificial irrigation, is already dead and in the meantime the Third landscape (G.Clement, 2004) has quickly took some areas of the site between the skeletons of structures and the abandoned gardens.
This photographic series wants to raise some questions not only on architecture but also on our society and civilization. 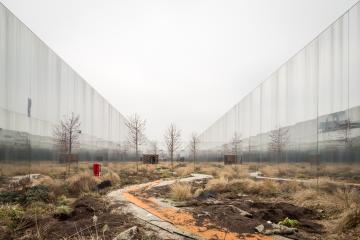 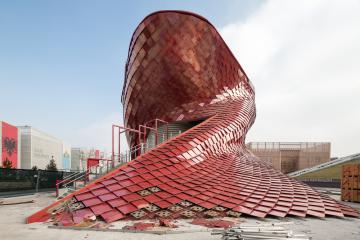