An interview with Yasmin Mund

Yasmin Mund won our recent theme ‘Six Continents’ with her gorgeous image ‘Rooftop Dreams, Varanasi’, taken while she was travelling through India. It has everything you could want from a travel image, transporting the viewer to a location full of cultural information, with arresting framing and vibrant colours. It’s both chaotic and peaceful at the same time – busy and yet still – which gives a lovely dichotomy. As a viewer, it’s an image that you can immediately appreciate but also spend a long time exploring.

We sat down with Yasmin to ask her more about the image, as well as her travels across the world, how her multi-disciplinary design education has affected her photography, and the concept behind slow journalism.

Hi Yasmin – Firstly, congratulations on winning Life Framer month 9 with a magical, memorable image. Can you tell us a little more about it?

Looking at the photograph now, yes it is a memorable image and captures a lot. Not necessarily about India but about humanity.

It’s interesting, because at the time I was traveling India and had been there for two months when I took Rooftop Dreams.

I captured this photograph because it was of the everyday. It wasn’t unusual, in fact I myself had slept on a few roofs during my trip as it was high Indian summer and the buildings hold so much heat from the day time it becomes too hot and stuffy during the night to sleep comfortably even with air conditioning.

It wasn’t until a month or two later when I was in Europe that I looked back at the image and saw that it had captured a magic kind of beauty that said something. But at the time I didn’t realise it was so special.

The story of me first seeing this sight was when I first arrived in Varanasi off an overnight sleeper train. I got to my guest house and instinctively climbed the seven flights of stairs to the rooftop to watch the sunrise over the Gangas river. On almost every rooftop around the one I was on were people sleeping soundly and peacefully in the early morning.

In hindsight the image visually represents me and as photographer quite well. I have been obsessed with sleep and dreams for some time, and I undertook a year-long research project called ‘Not To Sleep, But To Dream’ that visualised 12 universal dreams. I usually try and photograph things on flat angles, colour palette is a huge factor in my photography and when I photograph people I like them to be natural and candid.

It’s already won a few awards – why do you think it connects with so many people?

I think it connects with people because of the humanity that can be seen. It’s also an unusual angle to see people sleeping, we almost never get a chance to see someone sleeping from above – it’s usually from the side. Because of the angle the shape of the bodies can be seen and the closeness of the figures signifies love, family and connection to one another.

People empathise and connect with the situation, because everybody sleeps, it’s a human practice. The image has frozen a moment in time that although common in India, is not so common around the world. 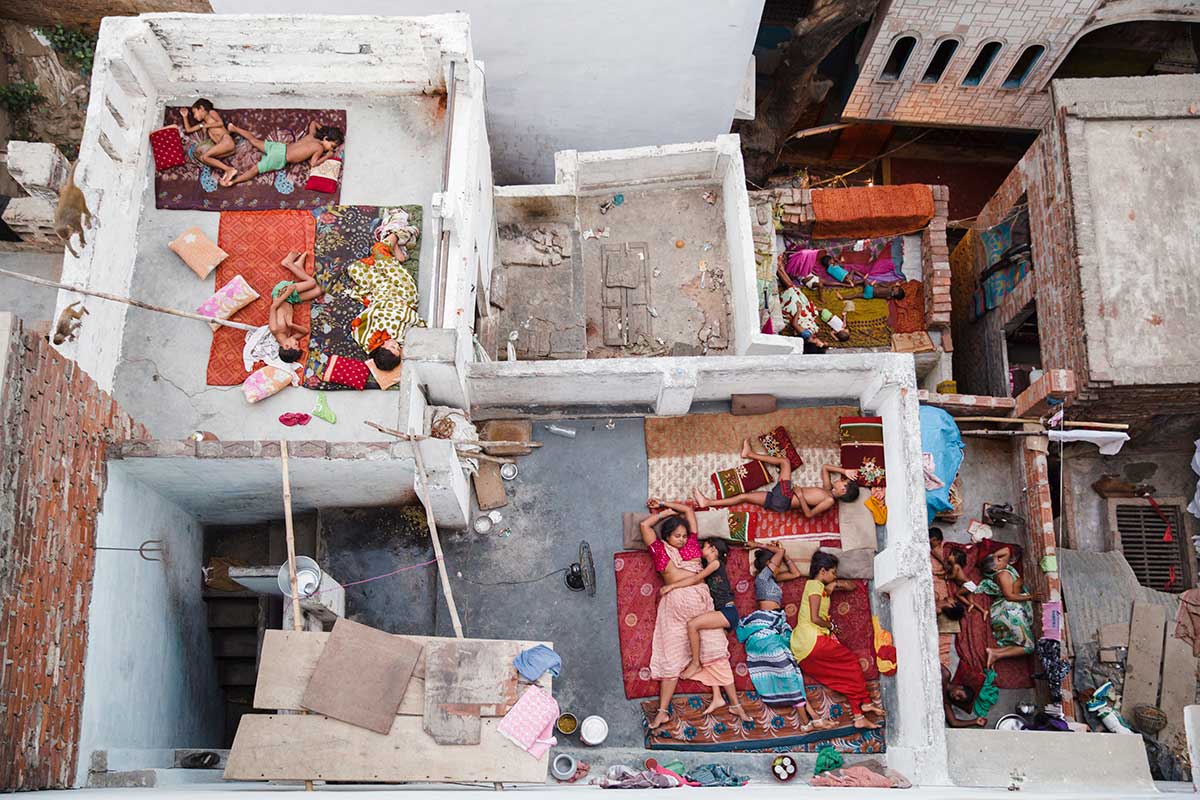 I understand that it comes from a trip that took in India, France, Greece, Egypt, Turkey and Morocco – tell us a little bit about that adventure, and the role photography played in it.

I spent most of 2015 travelling – I had decided that I just needed to travel. It wasn’t highly planned and I didn’t intend it to be a photography trip at all, it just felt like the right time in my life. I had worked for a photography studio, freelanced and felt the little travel itch getting bigger and bigger. I took on about 4 different jobs, saved up, packed up my life and flew to India for the second time. I booked a flight to India and a flight out of India to Europe 3 months later and that was all!

I took my cameras with me as they are of course a large part of my life, but I didn’t intend to photograph like I did, I just thought I would have them if I wanted to capture something. After a month in India I ended up not being able to relax in a new place until I had photographed and explored every inch of it. I then started planning my itinerary according to where I wanted to photograph, and all of a sudden, it became a photography trip.

And from a photography perspective, which has been your favourite place so far? Do you have a favourite image?

To be honest, Rooftop Dreams isn’t my favourite photograph. At the moment (it changes a lot and I have a lot of favourites) it’s a shot called ‘L’Hotel Agay’ shot on the French coast. I will be exhibiting it and a series next year in Australia for Head On Photo Festival 2017. 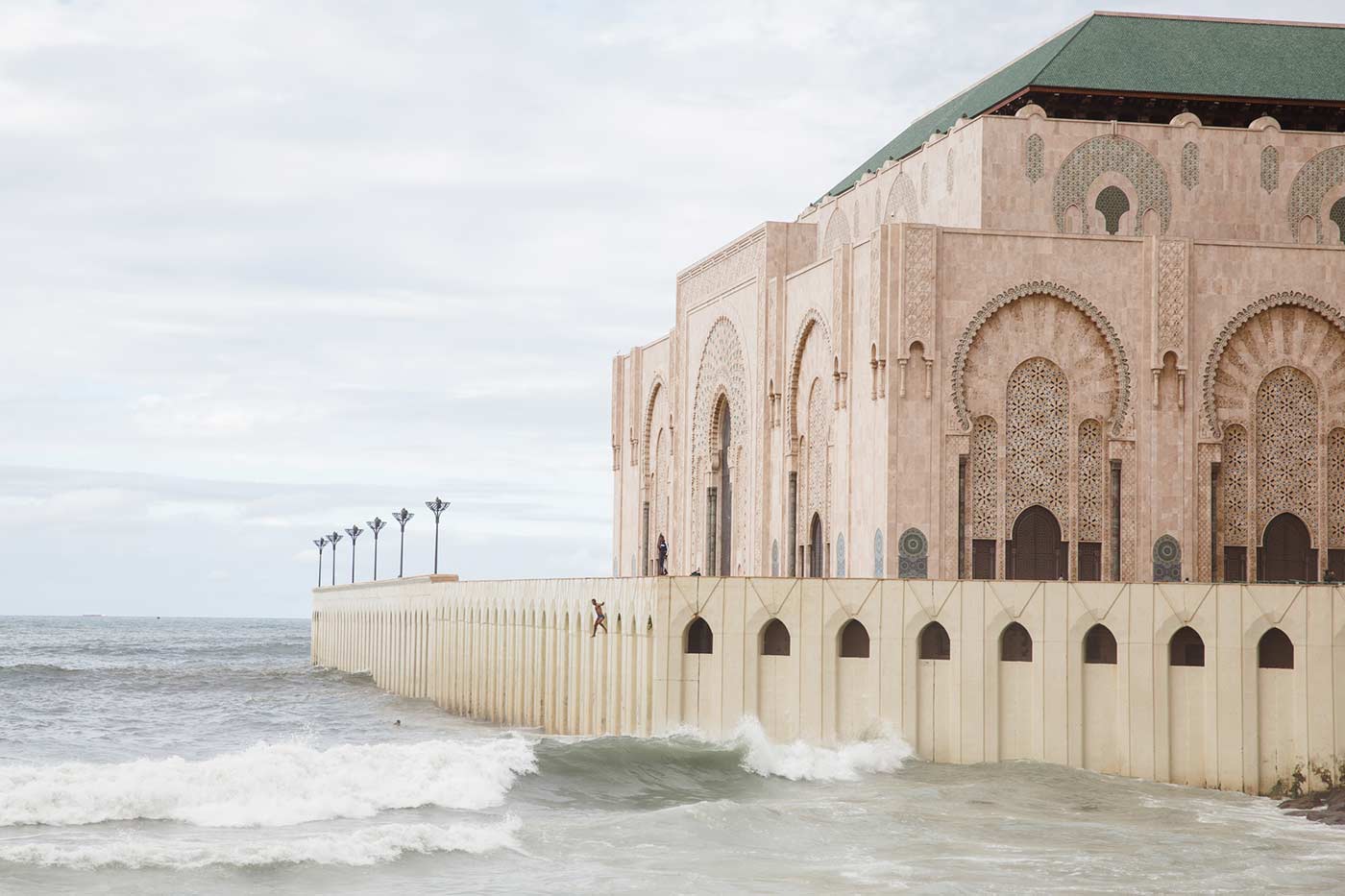 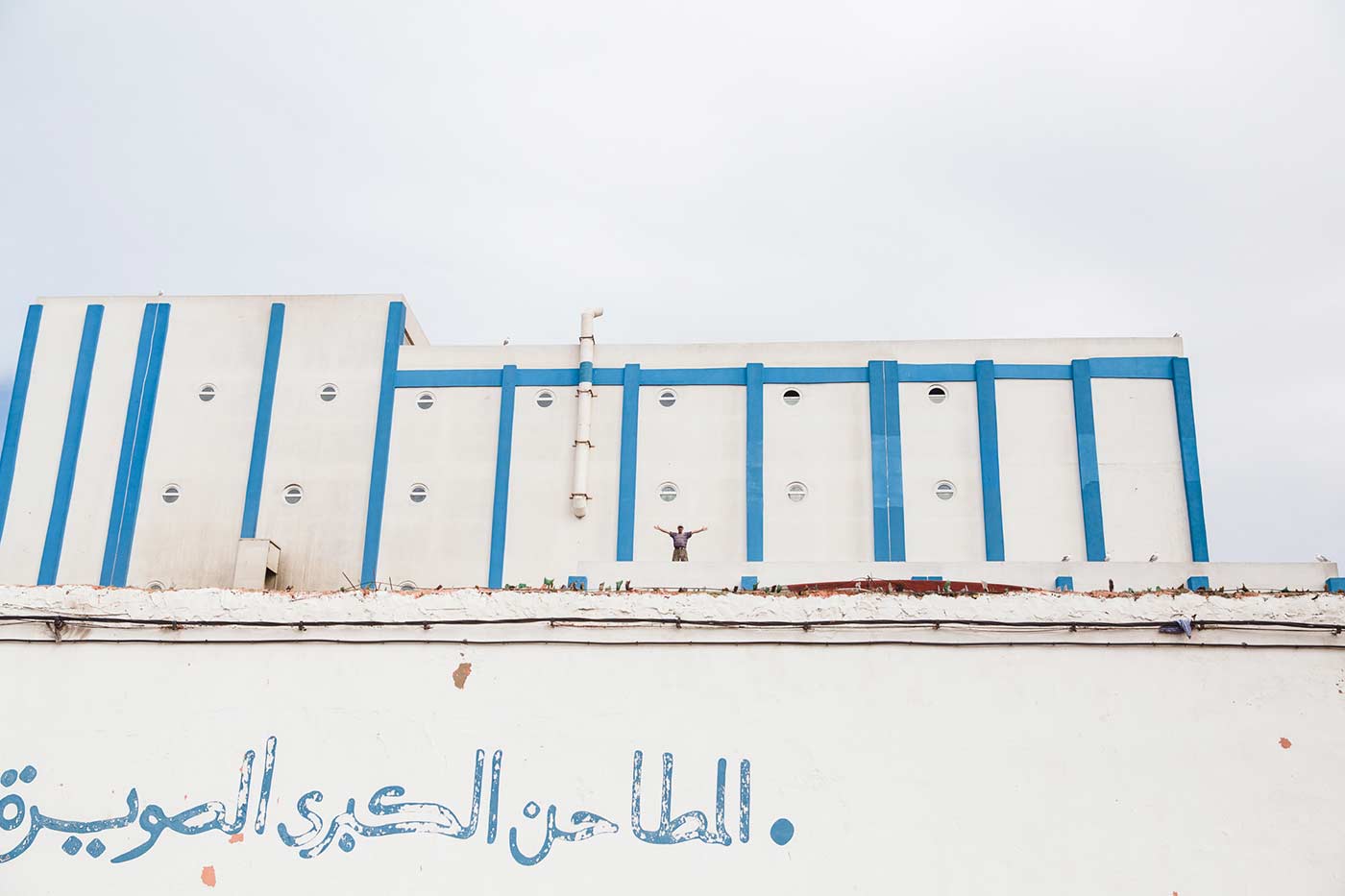 Above left, Jumpers 2015 – “This was an experience, Hassan II Mosque in Casablanca Morocco is one of the few mosques a non-Muslim can enter. It’s set on the sea’s edge with waves constantly crashing against its walls. The locals have made a sport of body surfing these 2 metre waves in to the stony shore but only after jumping off the walls to some applause!”

Above right, Essaouira 2015 – “Walking the back streets of Essaouira, Morocco and we heard a yell “Hello!”. We look around and eventually see this man waving his arms at us!”

You studied Design and Visual Communications, which I assume is broader than solely photography. Do you remember at what point you decided to focus on photography? And how have those other disciplines influenced you?

Yes! I have an honours in Design Visual Communications where I majored in photomedia, and my degree covers a lot of design disciplines that have definitely shaped my work. I use design theory, principals, colour theory and absolutely love semiotics.

To be honest, the reason I landed with photography as my creative medium is because I didn’t want to make PDFs all day as a graphic designer, I can draw okay but don’t enjoy it that much, I like basic web design but it never struck a chord! So photography was something that was there and I had (and developed) an eye for.

I’ve read you describe your style as ‘Travel Art’ – how does that differ from travel photography as we might think of it? Tell us a bit about your process – how you approach a new place, the research that goes in, and so on.

I describe my work as ‘art’ or ‘travel art’ because I always imagine its end point of being a piece of art on the wall. The way I compose photographs is usually a little more obscure and abstract than your expected ‘travel photography’ of iconic destinations. For example I like to represent destinations symbolically, like a photograph of old Doric columns in Athens to represent Athens, not the Acropolis.

When I arrive in a new destination I first spend a whole day walking or cycling around to scout and see what I want to photograph, I then set out to photograph and document the next day and I cannot leave (or sometimes even relax) until I have got every shot I had in mind.