Off the Beaten Track

Following Greg Girard’s selection of winning images for our theme WORLD TRAVELERS, this compilation of 20 images, selected by the Life Framer editors represents some of the other talented photographers whose work struck us and left a mark. Each a stunning image worthy of exposure and attention…

“Between the ages of 18 and 35 I spent any money and time that I managed to pull together on plane tickets to somewhere far-flung. Now I’ve got a young family that keeps me from straying very far, so I’m living vicariously through old shots. Some of these are from a couple months I spent in India a few years ago, some from a recent hiking trip closer to home, and some that may not have been while I was technically traveling, but that contain the spirit of travel.”

Editor’s comment: The longing for both travel and escape comes through here loud and clear. Adam creates a fascinating juxtaposition of the idea being trapped and confined with the longing to be free, the muted palette adding to that sense of nostalgic longing. 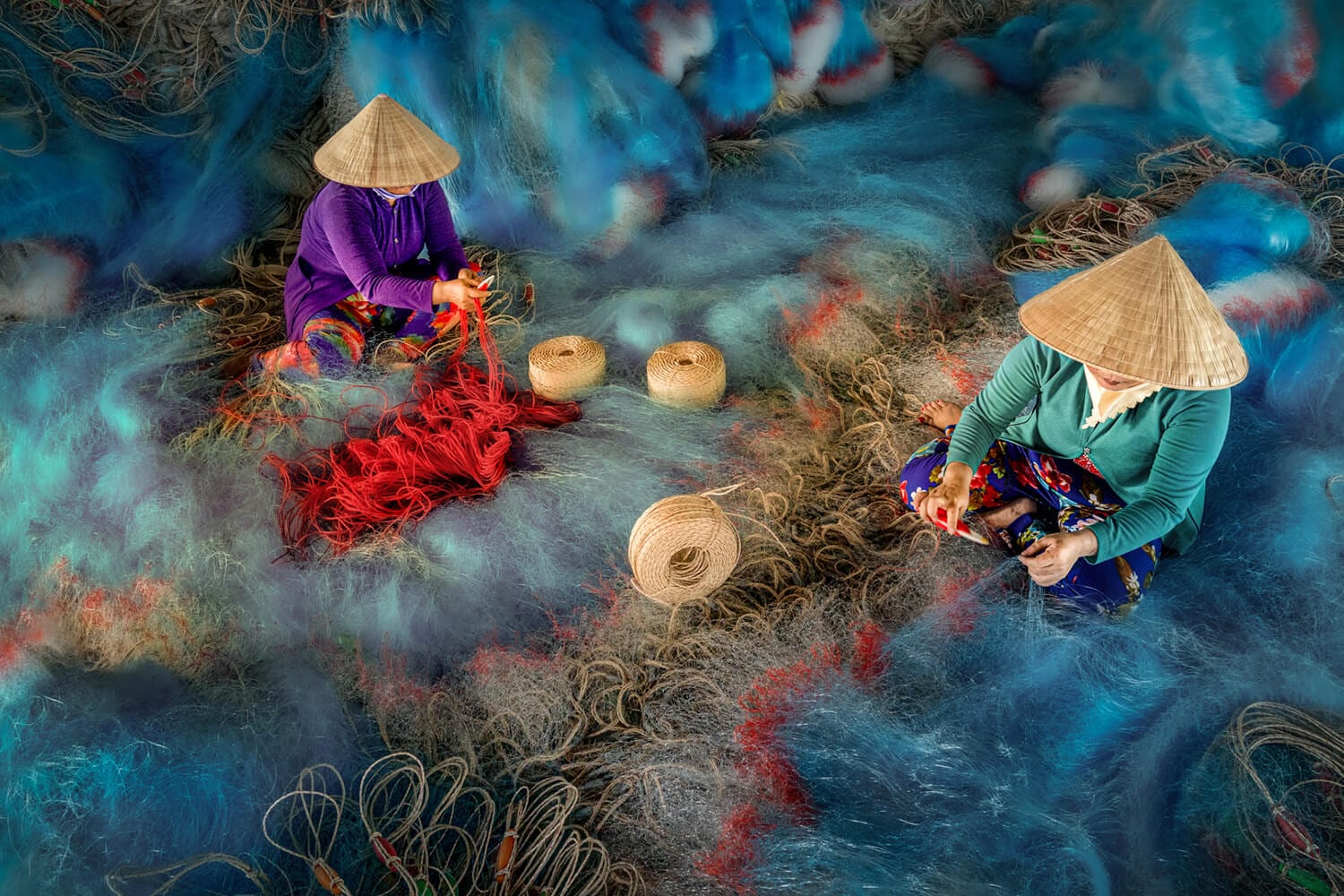 Editor’s comment: Here the cascades of color are eye-catching – almost like water under a slow shutter speed. The busyness of the frame is mesmerizing, but the compositional placement of the women helps to ground it, and the complimentary colors give it a punch. It’s a fascinating view into the intricate work of these ladies mending fishing nets in Vietnam. 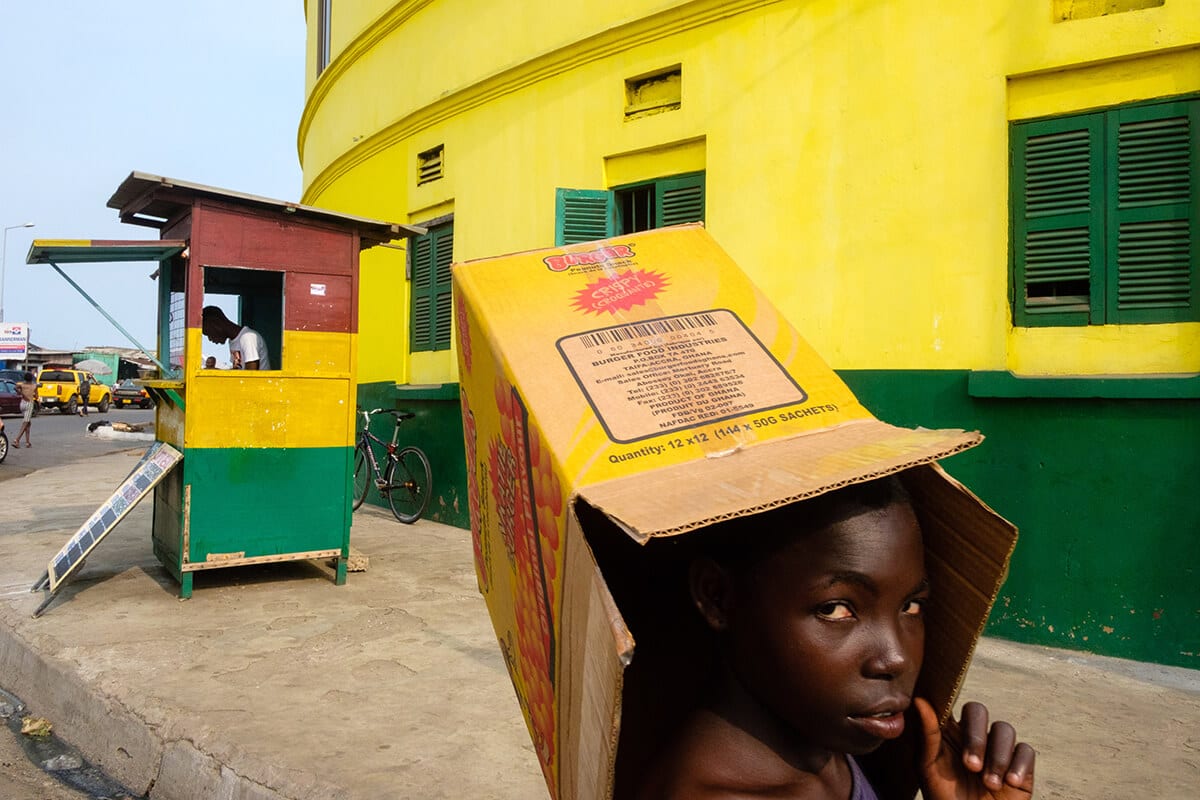 “These images were taken from my 5 year photography work covering over 100 major cities across 75 countries, where I focused on the diversity and connections found in daily life across all regions and cultures, with images that explore the layers of life within major cities.”

Editor’s comment: The color in this image is a strong unifying factor, bringing together the youth in the foreground, man in the kiosk, and building in the background in a playful composition. The cherry on top is the boy himself and his piercing gaze. 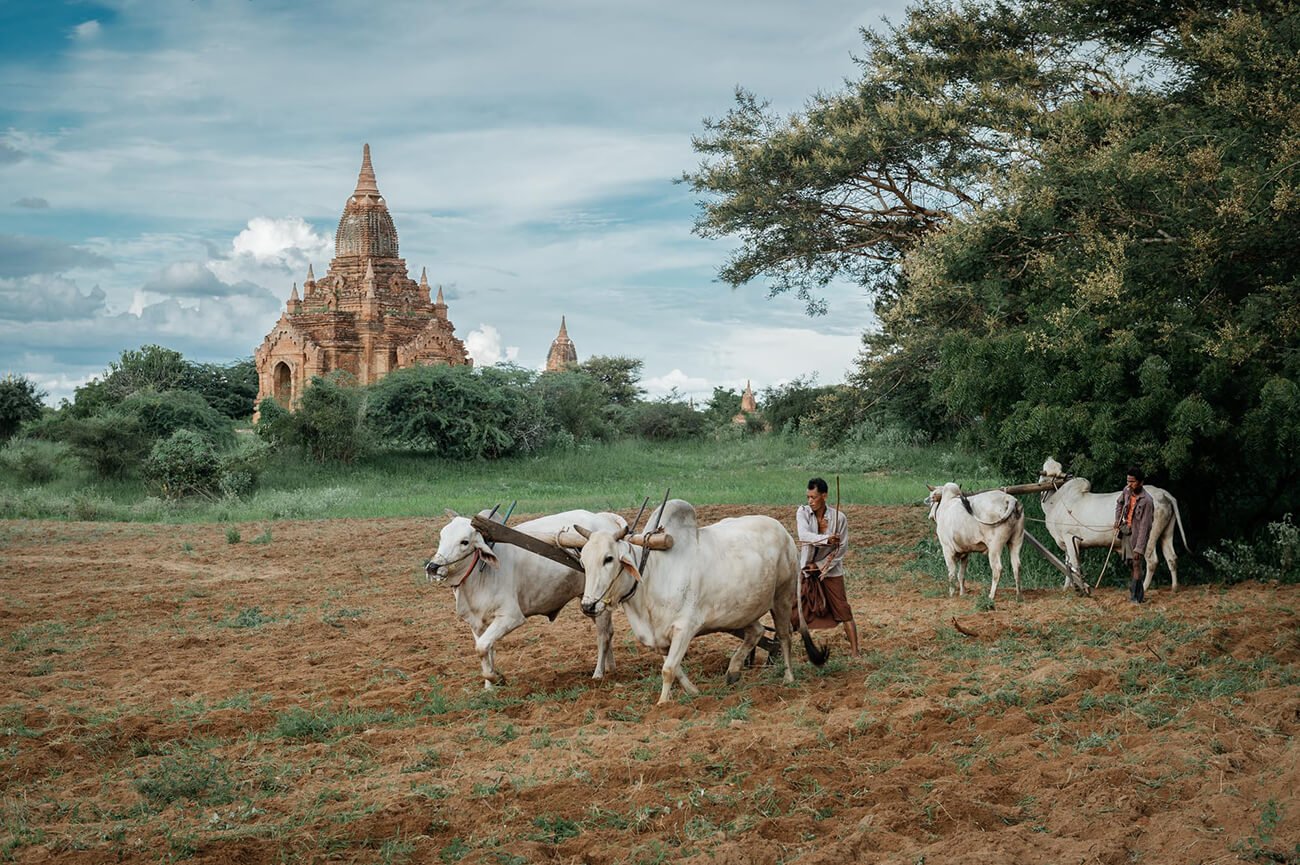 Editor’s comment: The color-treatment of this image offers the eyes a pleasant sensation of being inside a painting. At the same time, the soft pastoral colors and sense of calm contrast abruptly with the youth’s face as he goes to strike the ox, as does the simple life in the foreground with the beautiful architecture of worship behind. 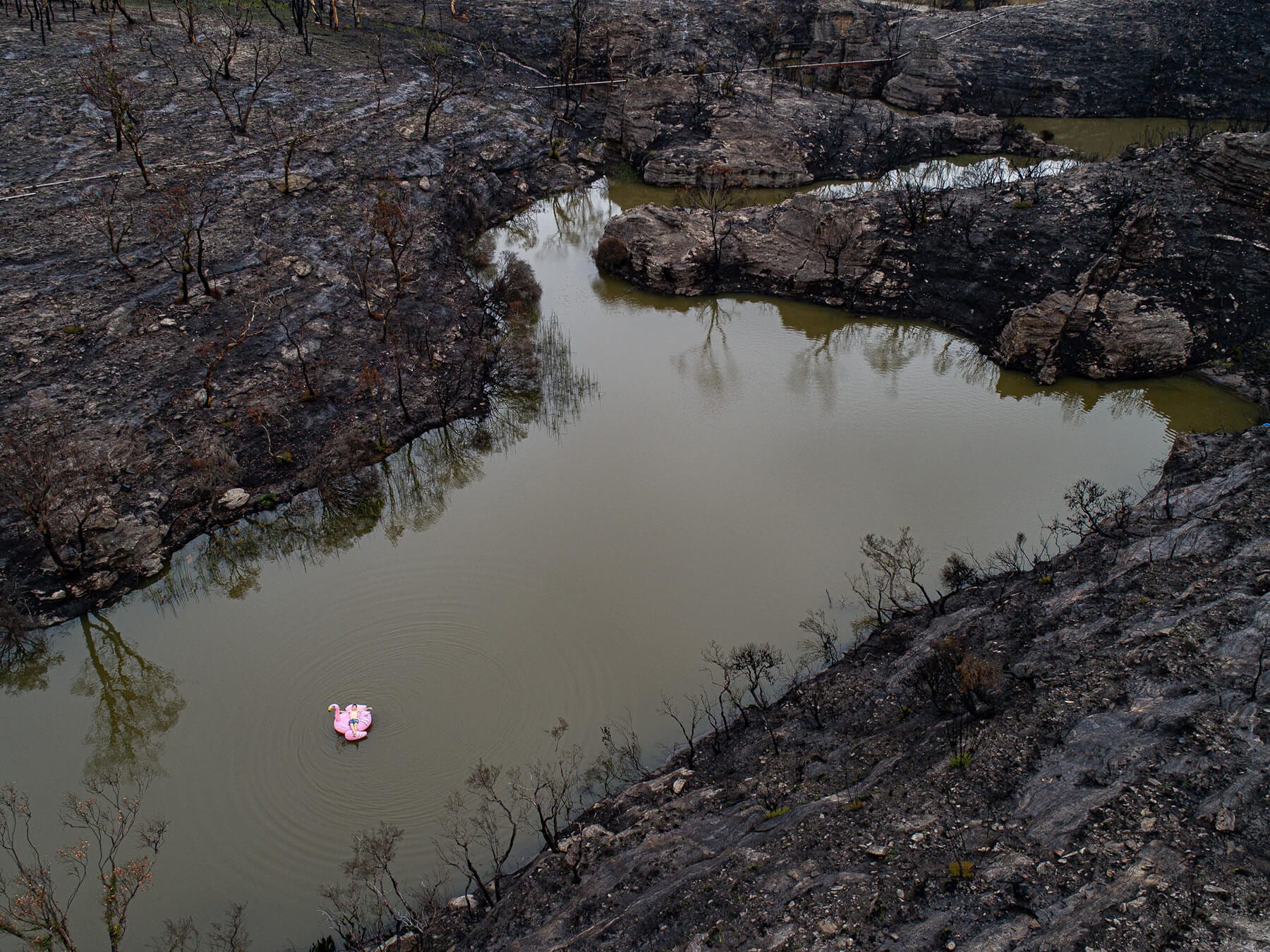 Editor’s comment: It takes a moment for the eye to see beyond the water and the burnt landscape, but when we do, it brings a delightful moment of surprise, whether candid or staged. 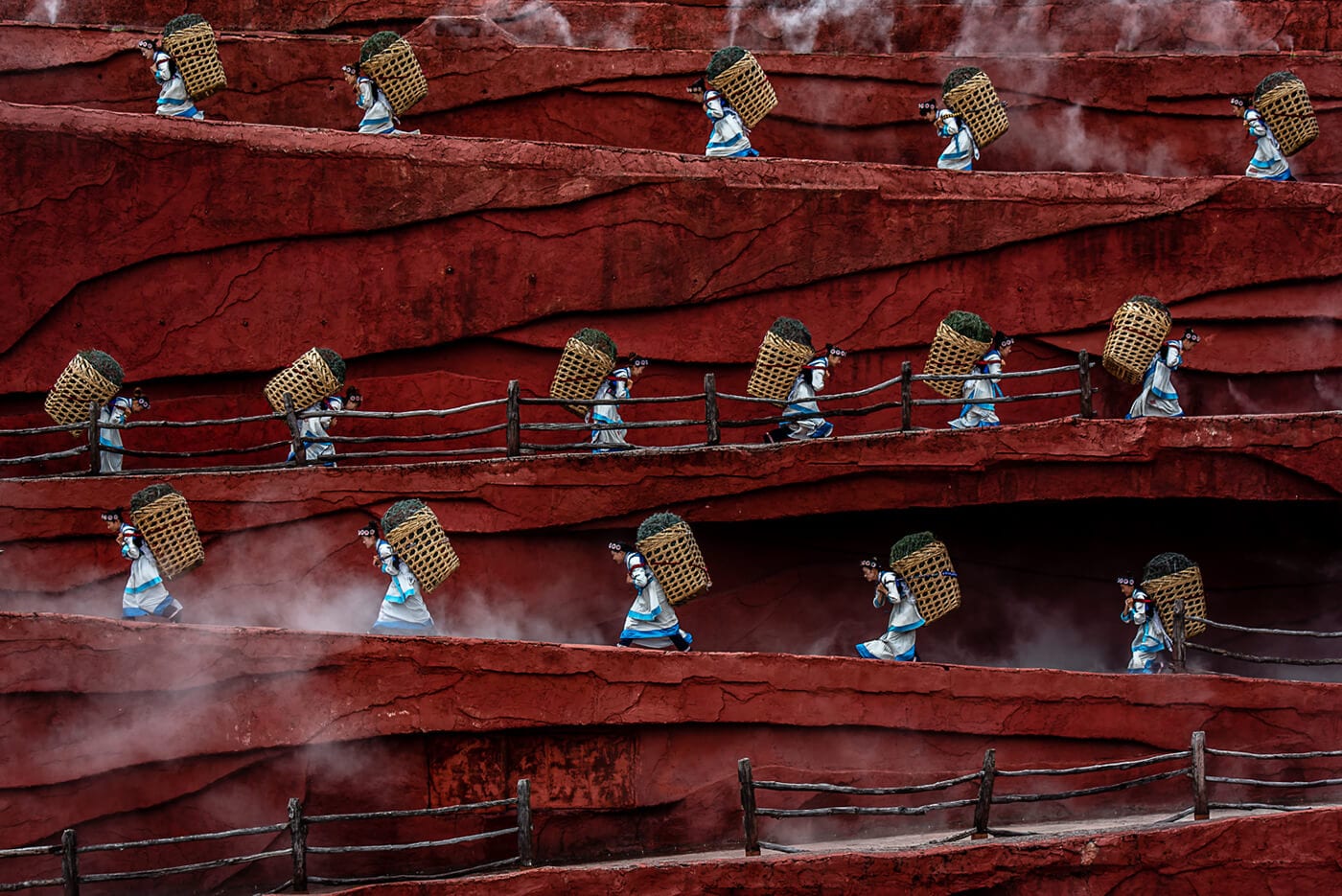 “Shot in China, where I traveled to find evidence of the ancient chinese civilization, increasingly rare but not yet completely lost. In “Rice growers” I represented women belonging to Bai, Naxi and Yi ethnic tribes harvesting rice by hand, following their ancient traditions. They wear their characteristic clothes and load heavy baskets full of rice on their shoulders, singing traditional songs.”

Editor’s comment: Each of the elements in this image work together amazing well – the leading lines, the color of the rock their walking on, the number of women on each level… even the dust. It has an incredible sense of movement and drama. An excellent capture. 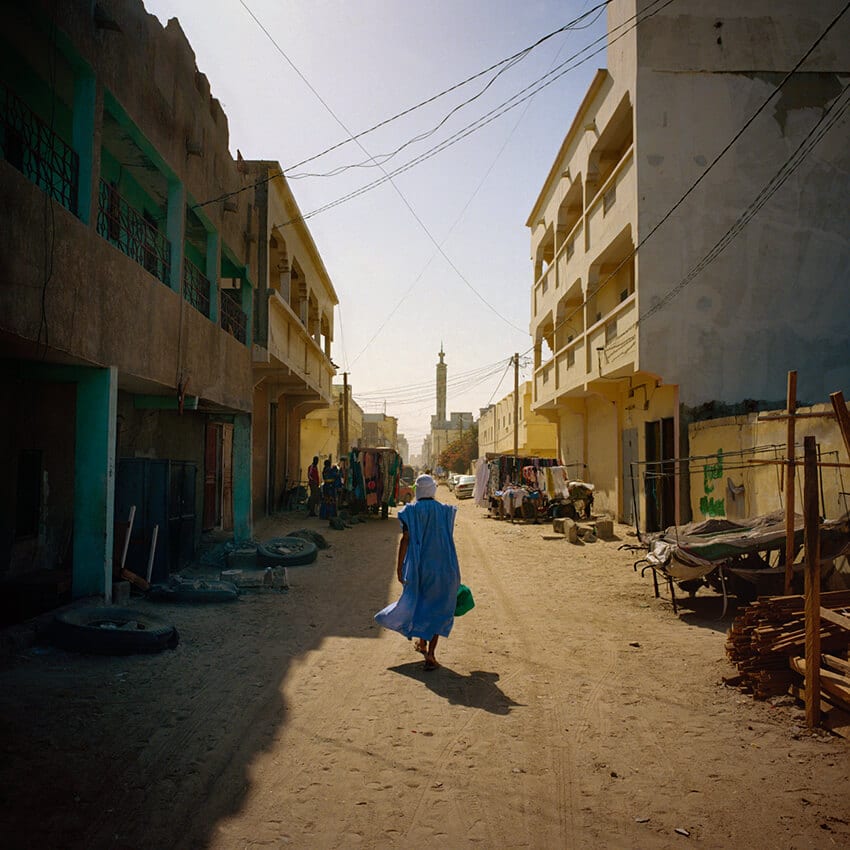 Editor’s comment: There is an excellent sense of world travel in this image. The movement and position of the subject, the almost abandoned street, the lighting, the colors, the symmetry… all work together to give us a sense of being elsewhere – feeling, as well as seeing the moment. 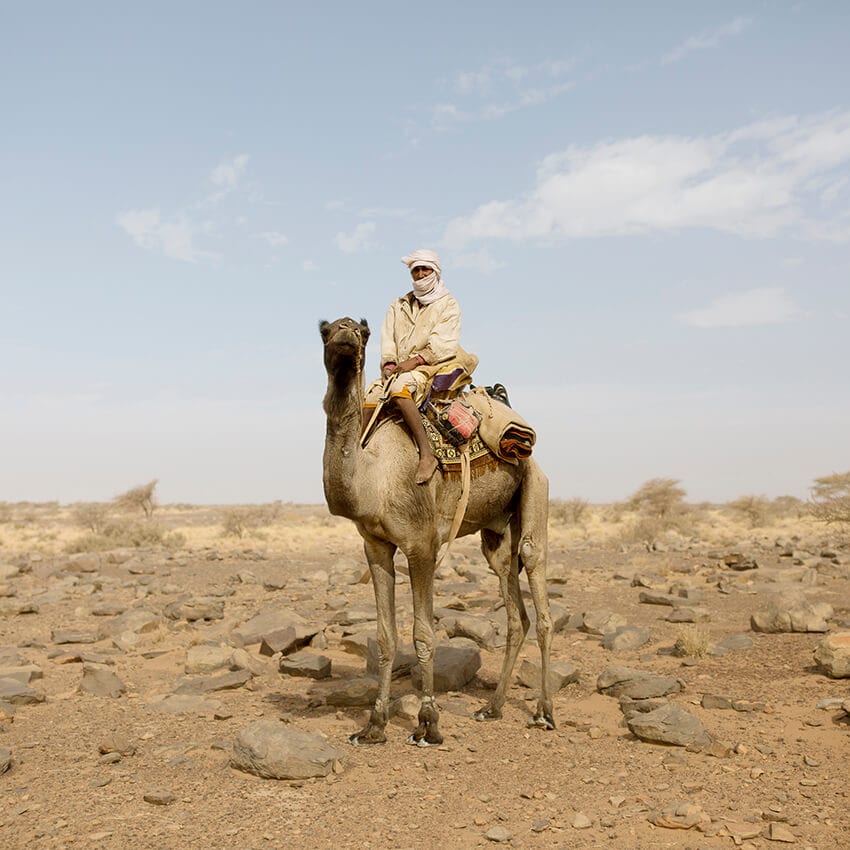 “A nomad traveling in the Sahara in the eastern part of Mauritania.”

Editor’s comment: This is a classic travel photo. The post-processing is also excellent, as the subject stands out perfectly from the background, and the expression on the camel’s face is just wonderful – almost acting up for the camera. 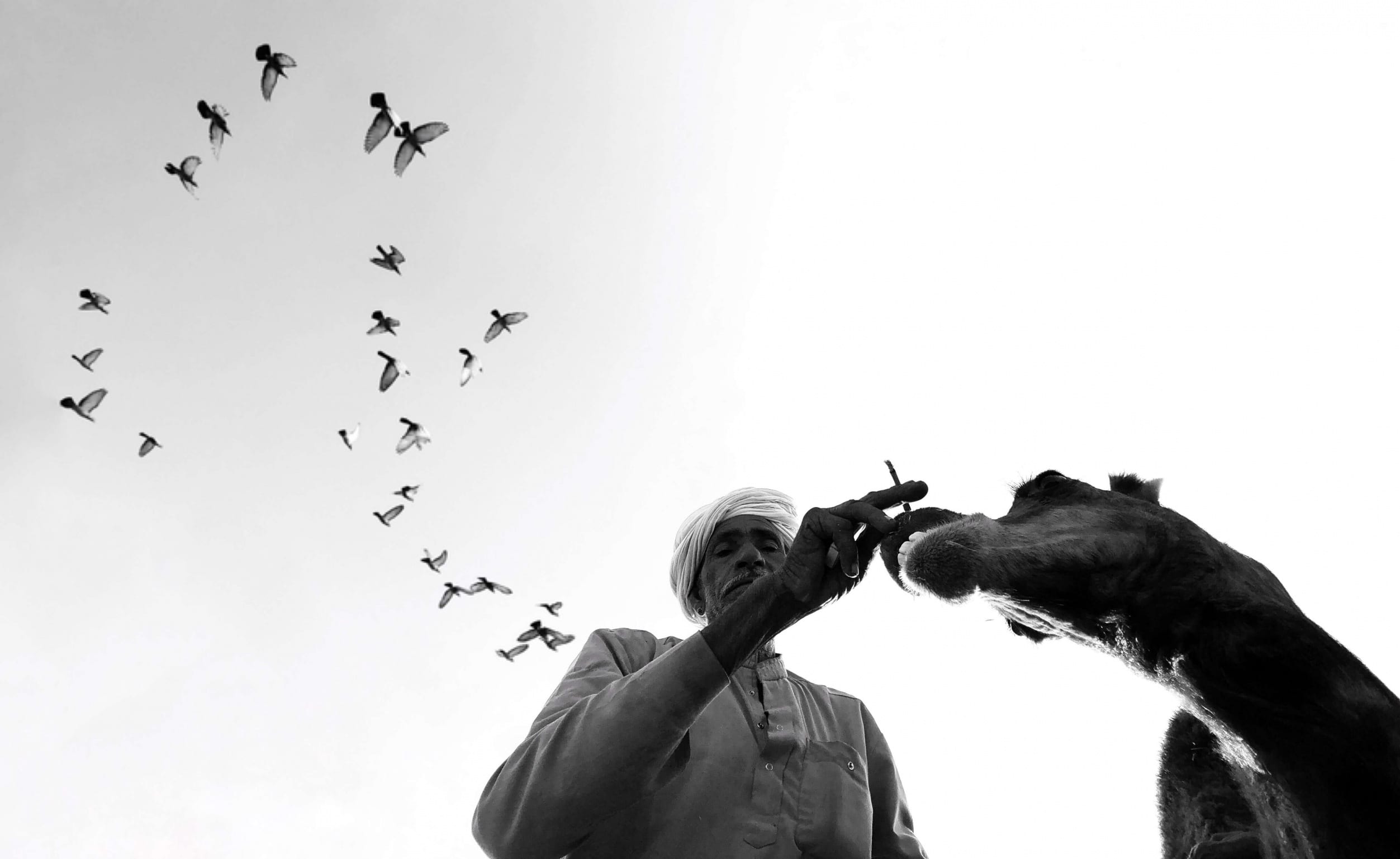 Editor’s comment: The three elements in this photo each have their individual appeal yet work seamlessly together – the eyes follow a curved, flowing path across the scene to the smoking camel, something equal parts strange, amusing and concerning! A wonderful candid moment, from an ingenious upwards perspective. 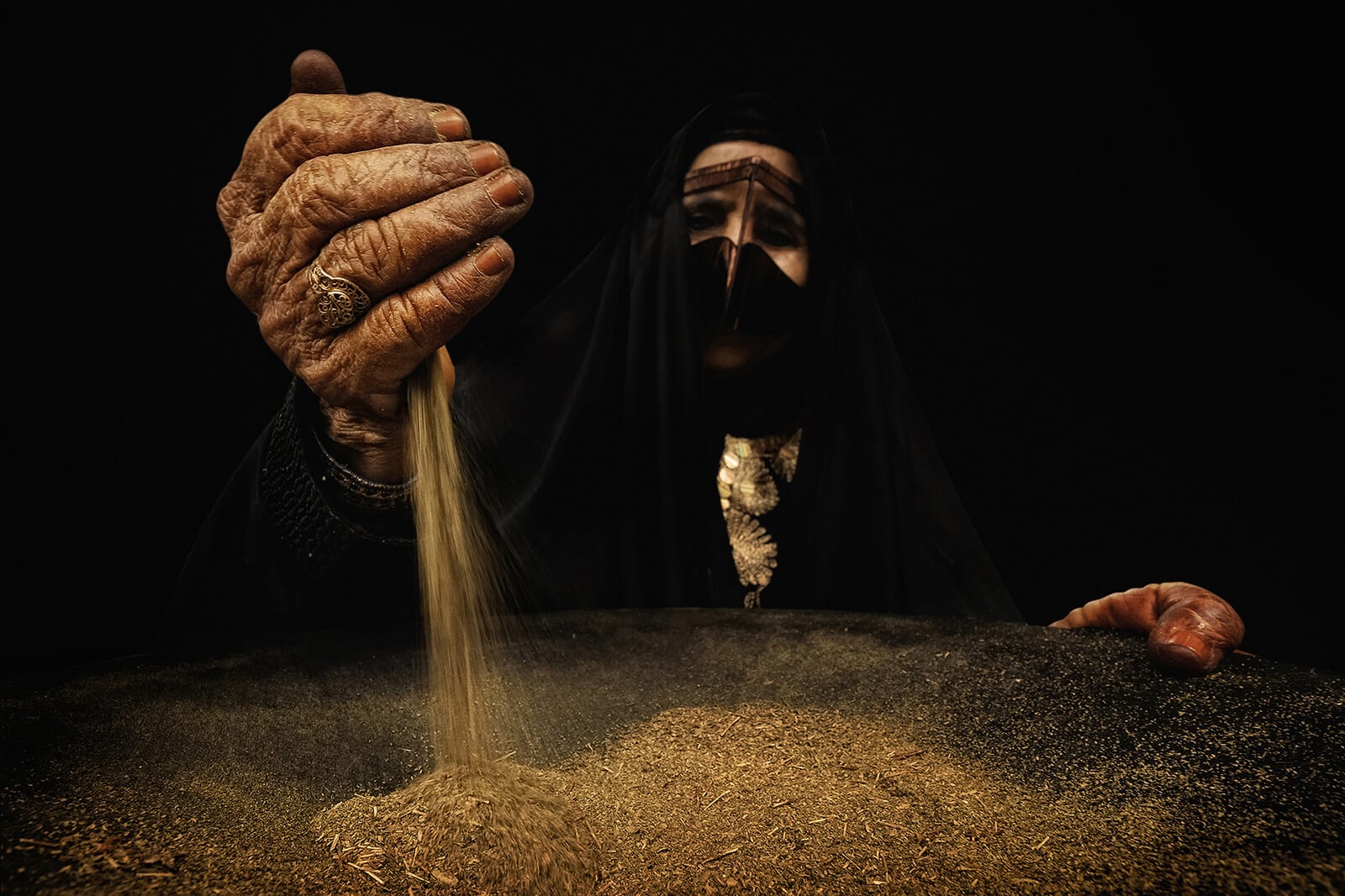 Editor’s comment: The point of view, depth of field, and clarity in this image make it highly immersive. The eyes travel a delicious route from the hand to the grain in the dish to the person pouring. Excellent work. 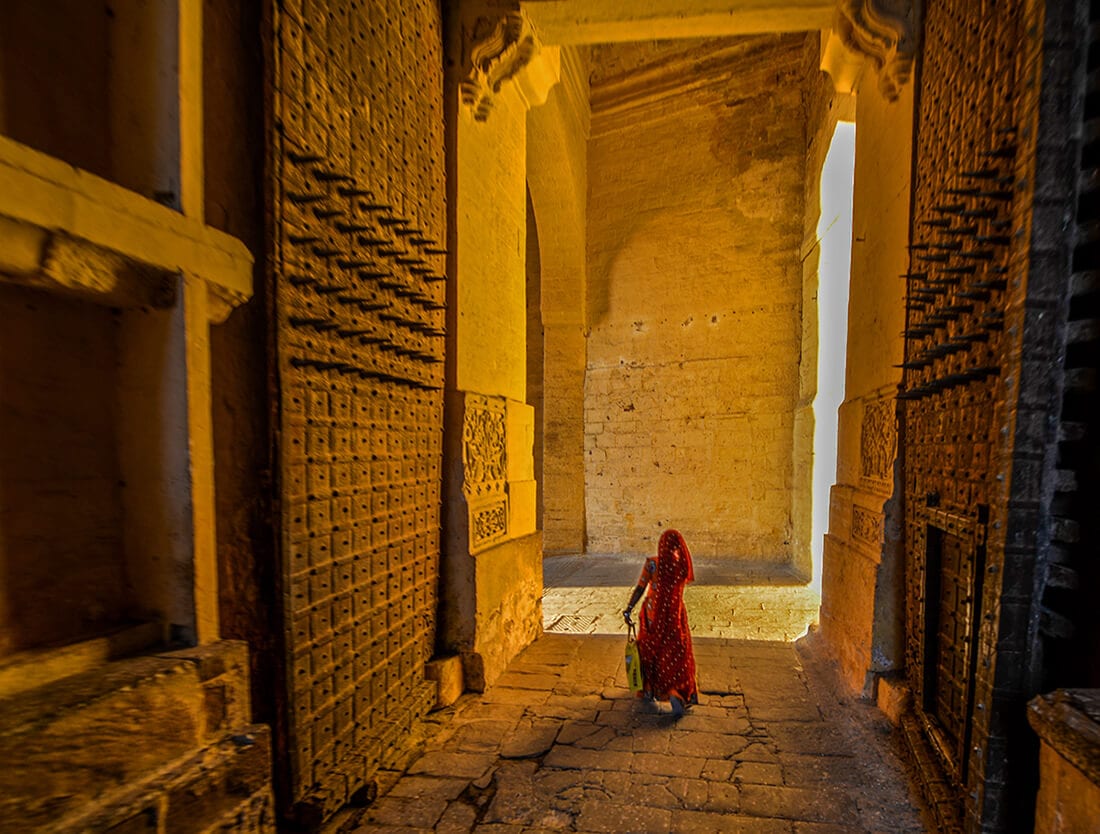 Editor’s comment: Beautiful lighting and composition, and even a bit of lens blur all act to leave the viewer with a delicious sense of other-worldliness. 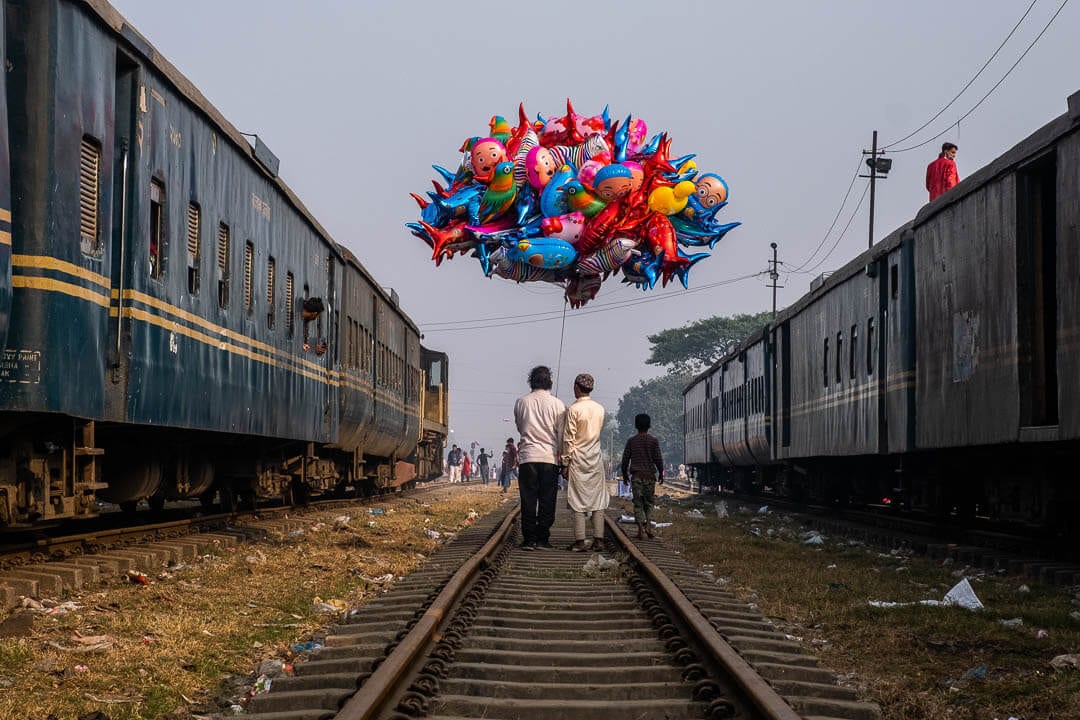 “After arriving by train in Tongi, pilgrims hastily go to the site of the Bishwa Ijtema, the annual gathering of Muslims in the outskirts of Dhaka, Bangladesh, for prayers. Only the balloons seller remains at the train station.”

Editor’s comment: The colors of the balloons beautifully offset the industrial feel of the trains, and the sense of companionship between the two figures, held centrally by the leading lines, is strong. It’s a gorgeous ‘slice of life’ from Tongi – a moment of simple beauty in a hard landscape. 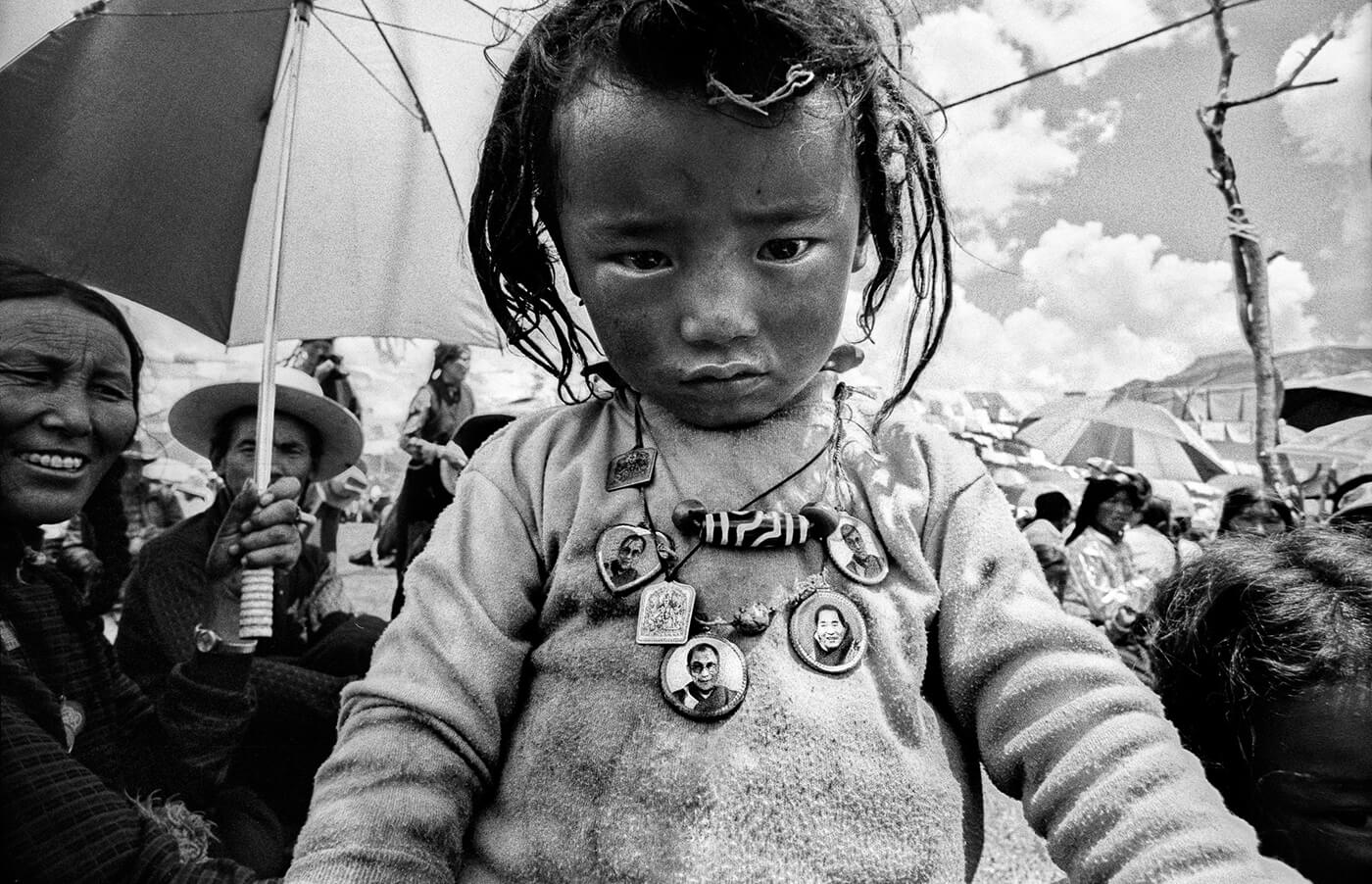 Editor’s comment: This is an intimate, intense travel portrait that becomes all the more powerful when we absorb the images in this young girl’s necklace. It talks to history, generations, the past and the future. Highly effective yet subtle documentation of the Tibetan people and their feelings toward their ousted leader. 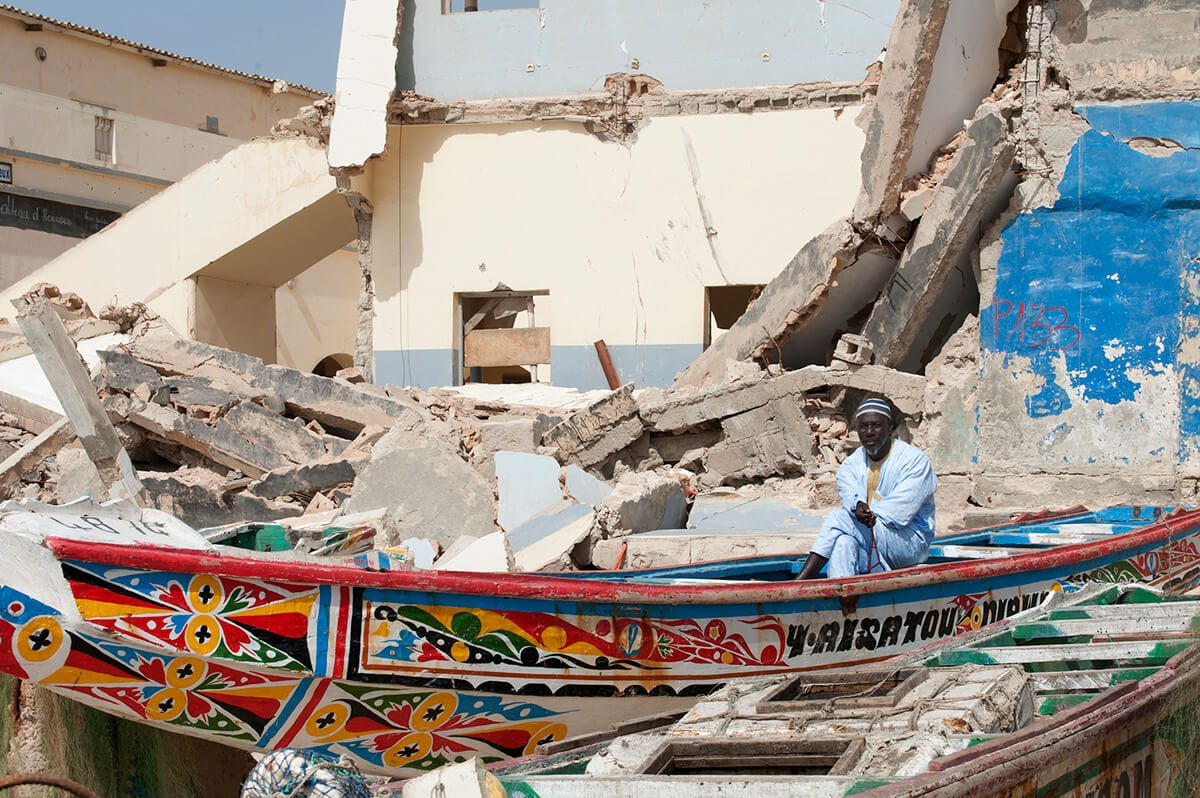 From the series Guet N’Dar – “I travelled to Senegal in 2019, in order to understand a little better why so many young people dare to make the life-threatening journey to Europe. I visited the city of Saint-Louis in northwest Senegal, the former capital of West Africa, which is exposed to increased threats due to its location on the coast and in close proximity to the Senegal River.

This image shows the district of Guet N’Dar, the so-called Fishermen’s Island, an offshore headland that is one of the most densely populated regions in the world. Almost everyone here lives from fishing. But the existence of these fishermen, who live with their families in self-built corrugated iron huts close to the sea, is threatened for various reasons. In ever shorter intervals, the surf waves beat so high that they devastate the houses and push back the sandy beach. In 2003, the sea took an entire village with it. The reasons for the rising tides are the rise in sea level due to climate change, the removal of sand as a building material and the construction of a canal, which was supposed to contain the floods but instead ensured that the opening between the sea and the river has continued to grow to this day. The fishermen have to pass this opening in their self-built boats, but this is often almost impossible due to the extremely strong current. Many do it nevertheless and risk their lives.

While the many small children are running around laughing and playing, their older brothers and sisters are already busy contributing something to their livelihood. Since the work of fishermen is physically very strenuous and only young men go out fishing, it seems that men over 40 no longer have a regular job. So it does not surprise me that all young people – without exception – have asked me about life in Europe and would rather leave their country today than tomorrow. Not to stay there forever, but to support the extended family financially.”

Editor’s comment: It take a moment to process the layers of this image – a Senegalese fisherman sat on his boat, which must be maneuvered through tight canals and urban ruins to access the sea. It’s a remarkable insight into a perilous occupation, with the dichotomy between the beautiful, labor-of-love paintwork of the boat and the ruins behind acting to highlight the sense of fragility for many making a life around the world today. 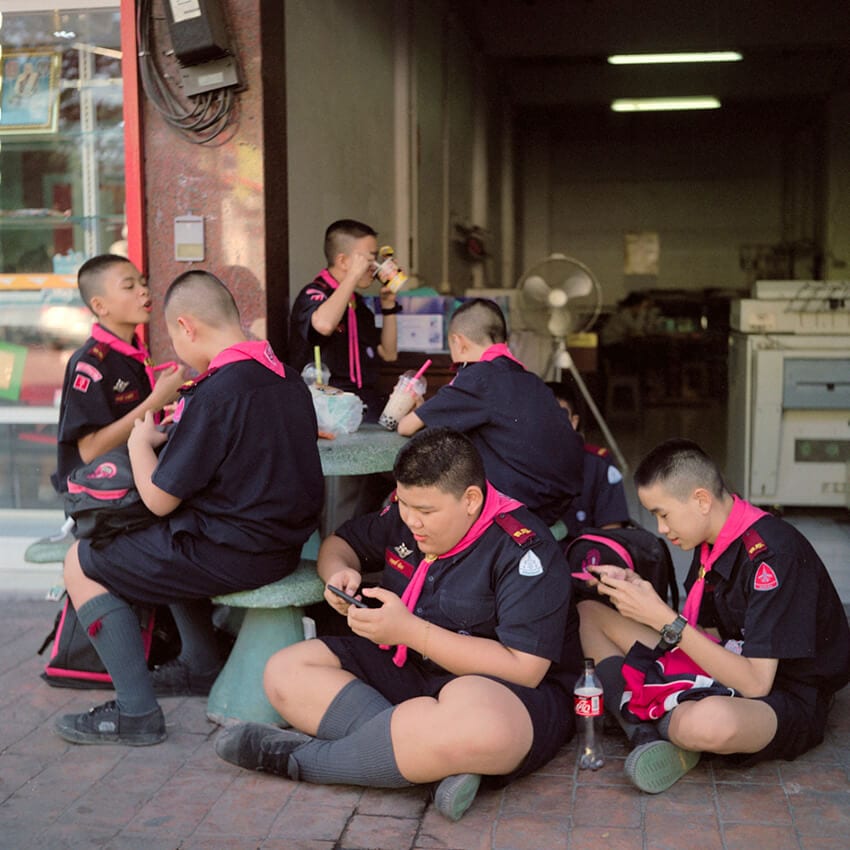 Editor’s comment: An excellent ‘slice of life’ photo with the unusual leading lines of a spiral, that illustrates some of the differences and similarities with youth around the world. The color of the boys’ scarves adds a nice accent. 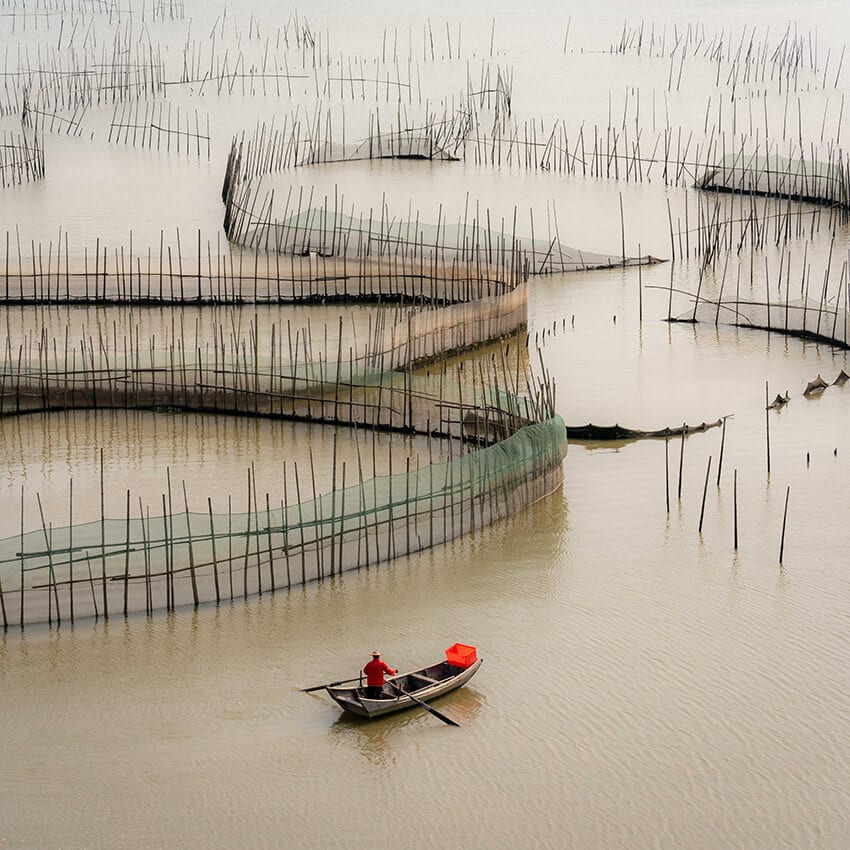 From the series China – “Colorful crab cages dot the landscape in the fishing “village’ of Xiapu. The southern province of Fujian, which Xiapu is part of, produces 2/3rds of the world’s seafood and crab cages, seaweed drying poles, and other pieces of equipment make great photography subjects due to the large scale and seemingly endless repetition.”

Editor’s comment: An excellent point of view. The red of the fisherman and his boat pops against the leaden water, and the leading lines take us farther into the frame, leaving us to wonder what’s beyond the reeds. 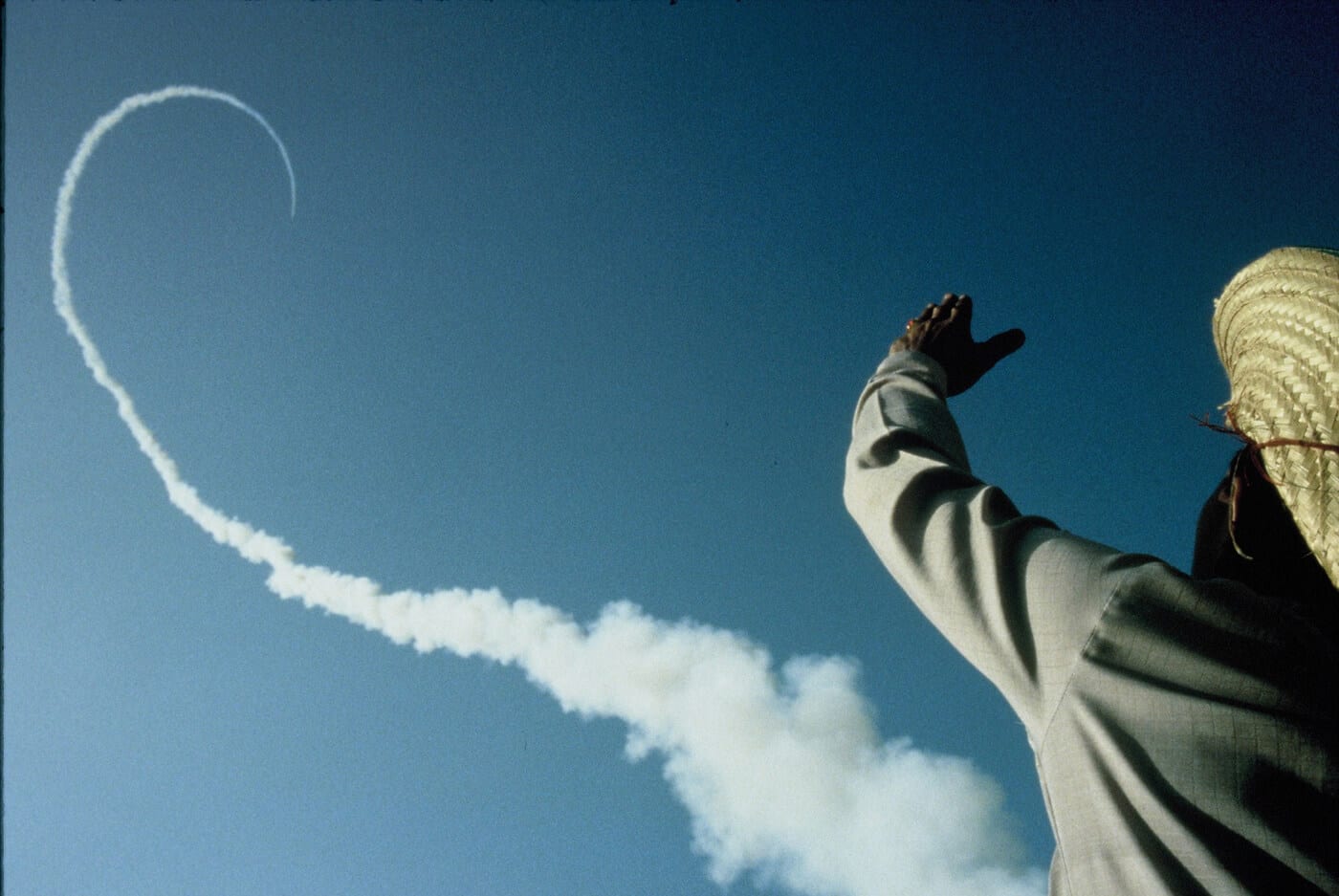 Editor’s comment: Stunning leading lines, especially with the trajectory of the smoke trail matching the curve of the man’s arm. The sense of travel is strong, only outweighed by the mystery – we’re left to wonder who he is, where he is and just what he set off. 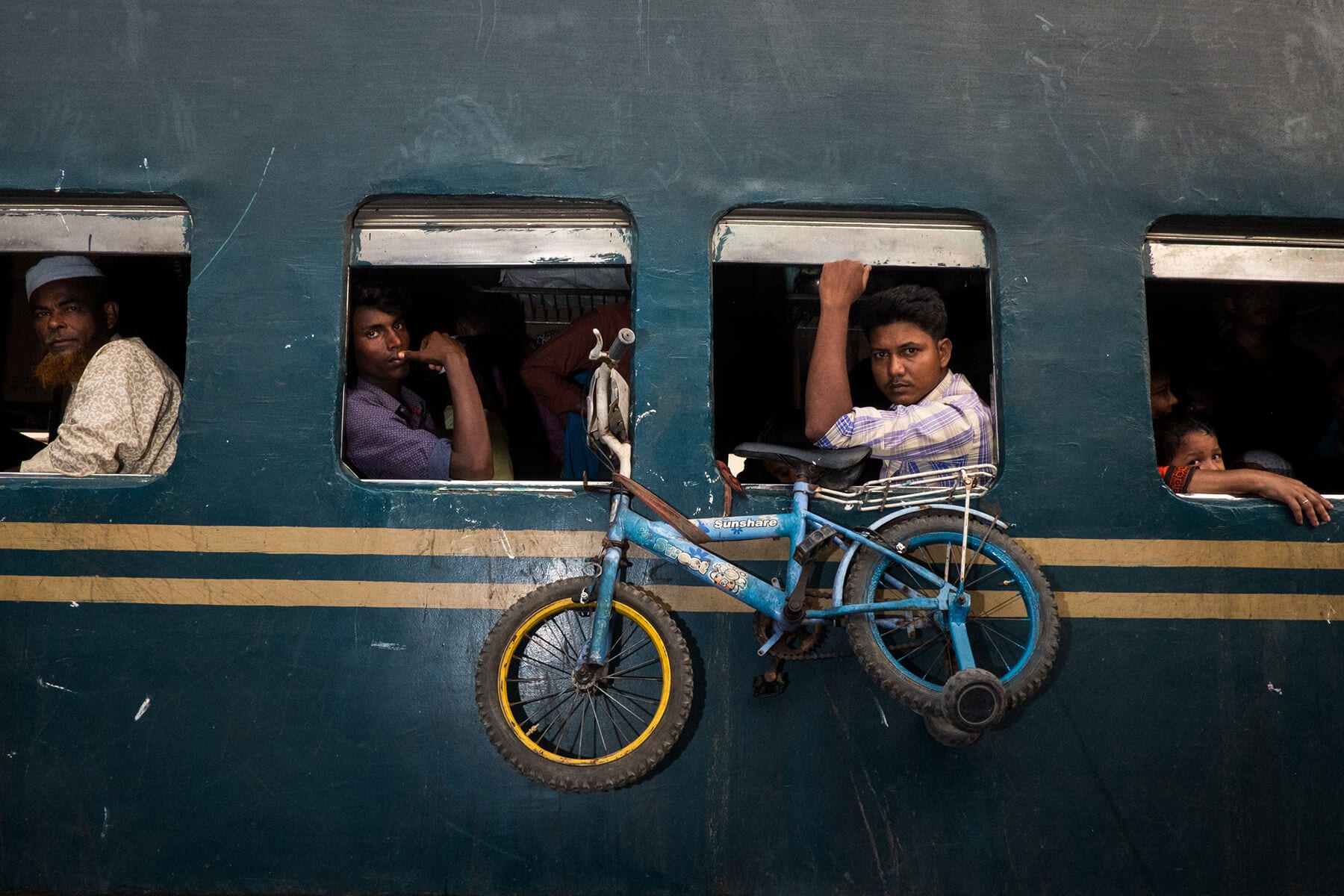 Editor’s comment: Beautiful composition and color – especially with each person looking at the camera through separate train car windows. The child’s bike hooked to the side of the carriage illustrates some clever ingenuity, as well as adding an extra layer in how this image embodies the theme. 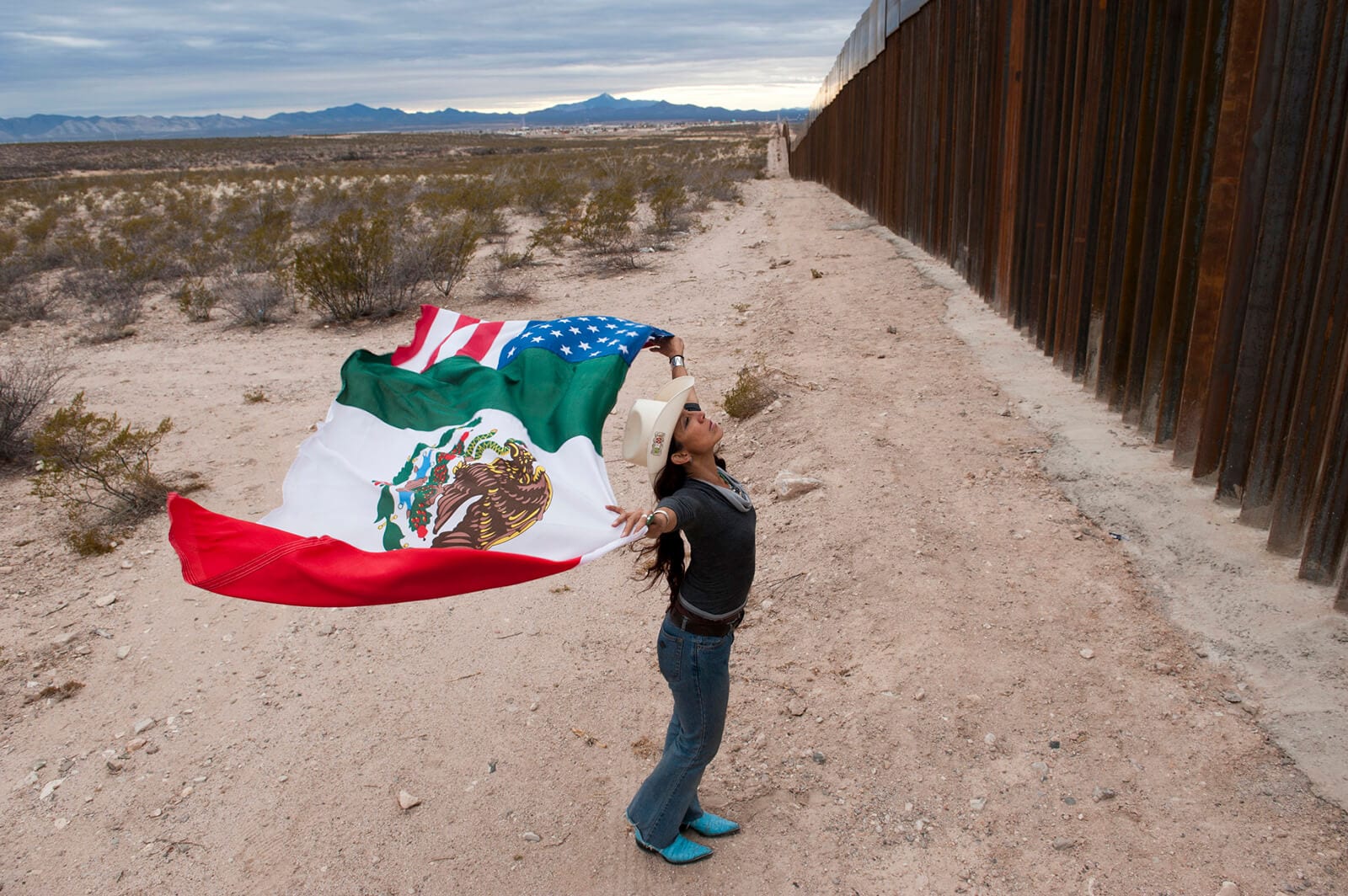 “Over the last ten years I have traveled to most major and some smaller cities on both sides of the 2000 miles long U.S. – Mexico border and photographed about 200 painters, photographers, musicians, writers, dancers, architects and art promoters in order to shine a spotlight on the vibrant cultural activities and cross-border opportunities that exist despite the tremendous challenges in this bi-national region. The region has particular significance to me since I was born and grew up in Germany where a border divided my country in East and West until it came down in 1989. Meanwhile the steel ‘wall’ between the US and Mexico is growing in length and height and does its part to create a physiological and physical barrier between the United States and Mexico.”

Editor’s comment: This is a direct, eye-catching and well constructed image of the popular response to the border wall between the United States and Mexico. The color of the conjoined flags and the posture of the subject contrast nicely with the bleakness of the desert and the emotional/psychological barrier of the wall. It’s almost as if the wall is seeking to block a bird in flight.

From the series Dislocation (Rajasthan) – “Women and girls in parts of India face many forms of gender-based violence and discrimination, including rape, ‘honour’ killings and abductions. In this series, portraits of young girls in Rajasthan are ‘dislocated’ from their original context, to a streetscape overlaid with text from news reports of child rape.Sub/text (Kashmir)Travelling in India you can’t help but be struck by the social inequities, with lower-caste workers condemned to de facto slavery. As ‘wealthy’ tourists we are served by many Indian workers, who cannot imagine the lifestyle options that we Westerners enjoy. The roads of Kashmir and Ladakh traverse steep and barren terrain, and road crews camp alongside the roads and perform the necessary maintenance work, in all weathers. In these images, taken in Kashmir, Northern India, pictures of workers are juxtaposed with local found texts – political posters, graffiti and wall texts, and Buddhist prayer stones.”

Editor’s comment: This is an interesting, creative approach to bring attention to gender-based violence and discrimination against women in India. The dual exposure creates a sense of fracture in the scene and acts to flatten the landscape. While it looks a little jarring, it works well when absorbed alongside Belinda’s statement.