An interview with Tatenda Chidora

“With the times changing, Africans have been empowered to control the narrative… Without any disregard for the reality, I believe we still have a better story to tell beyond all of our problems as Africans.”

Tatenda Chidora won our Colors competition with an imaginative and provocative image that subverts the narrative of the Covid-19 pandemic into something hopeful, and that judge Murray Fredericks praised for its “comment on the universal human experience of this moment in an original way”. Keen to know more about the image, the series from which it was taken, and Tatenda’s approach, we put some questions to him. His answers — touching on how his ideas are translated into reality, what the future of the exhibition space looks like, and why he champions Africanism, focusing on the celebration of black skin and contemporary masculinity — were engaging and insightful. We invite you into his world…

Dear Tatenda, congratulations on winning our Colors competition. What did you make of judge Murray Fredericks’ comments?

Thank you, for your consideration. I am truly honored to have been awarded this prize. Murray picked up on the premeditation that I had when I was creating the body of work. I was always drawn to masks from TV medical series, and during the pandemic I realized that the hospital was amongst us. We become moving hospitals by wearing masks which also acts as a form of isolation from one another.

I understand that the image is from your series If Covid Was a Color. Can you tell us a little bit more about the image and series, and the story you wanted to tell with them?

“If Covid was a Color” Is a body of work that I started working on in August 2020, during the pandemic. I was in a space where I was personally frustrated because of the uncertainty of the time and a lack of work coming through. I realized that there where many forms of visual stories of the pandemic that were translating the time, but that they were mostly from a documentary or photojournalistic perspective. This presented to the viewer a harsh reality of the time, emphasizing the pain, isolation and despair. I then decided to approach the series with these elements but from a desire of wanting the viewer to gain a sense of courage and hope after encountering the body of work. As visual storytellers we have a responsibility to translate the current times. The pandemic was really devastating but in remembrance of the time I would love for my work to be considered. I experimented with PPE material which I crafted as my props and elements of design in the images.

The creativity on display in this work is wonderful – sculpting surgical masks, gloves and sheeting into new, poetic forms that your models interact with. What was the creative process like? Was there some spontaneity on set, or was everything pre-planned in your mind?

The process was pre-meditated before executing. Coming from a background where I am exposed to fashion and the love for fashion, it allowed me to experiment. I would draw up sketches of the images that I had visualized. This would be followed by making the props and costumes. I would then make the props, with help from friends that had stitching experience but also with staple guns and cable ties. There was a lot of pre-planning well before the shoot with a conscious consideration of the regulatory terms that we used every day such as social distancing, mask-wearing and self-isolation. 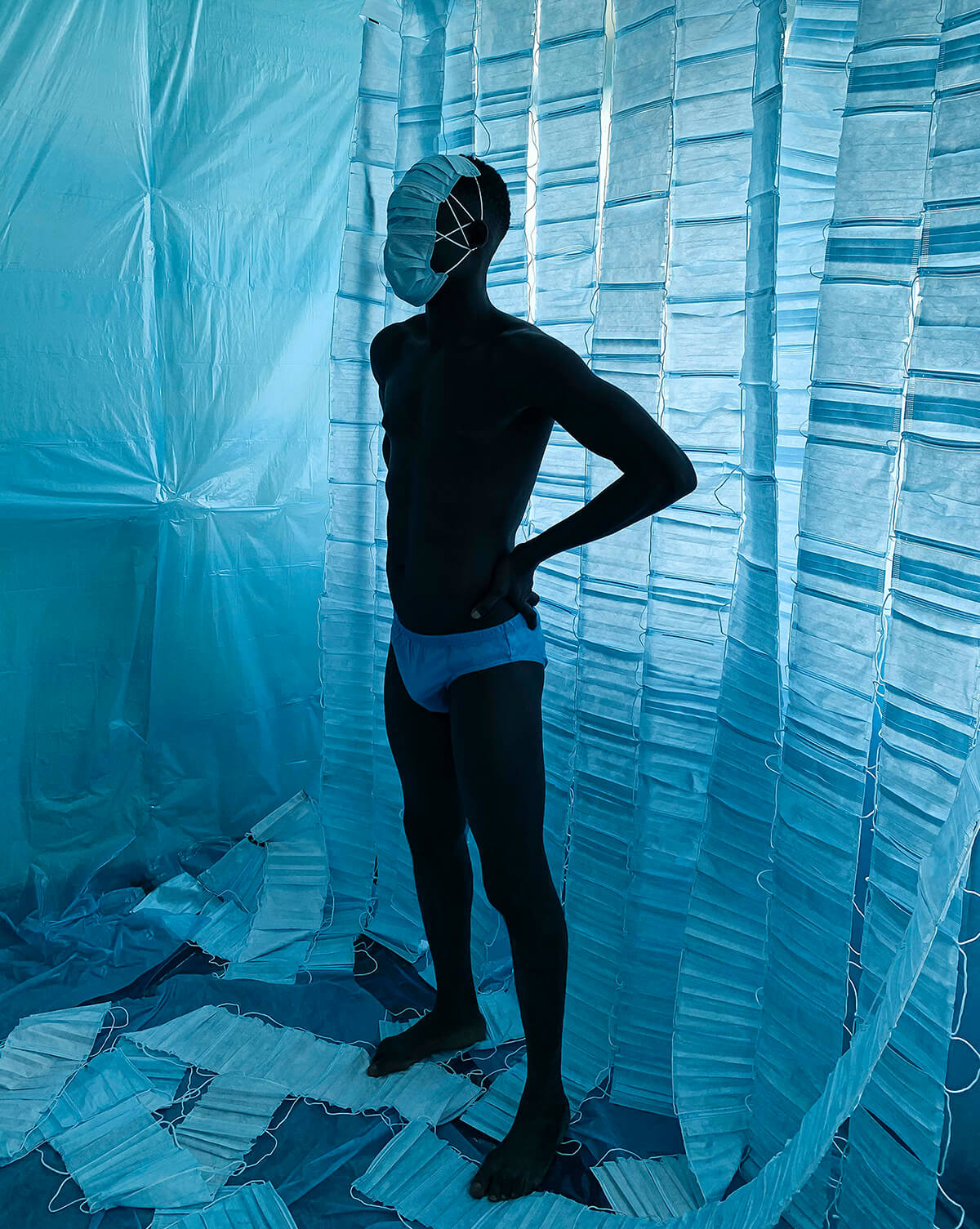 SELF ISOLATION I – TATENDA’S WINNING IMAGE FOR COLORS 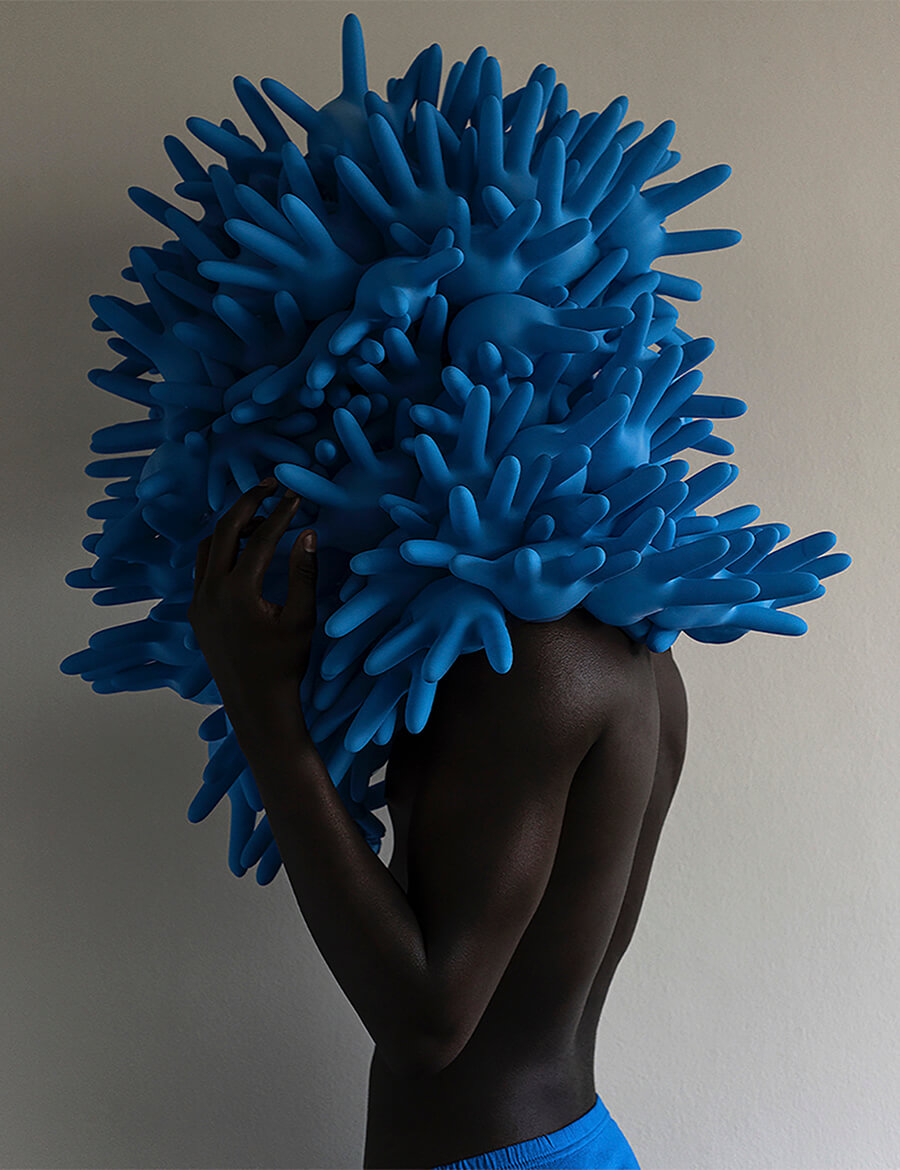 IF COVID WAS A COLOR 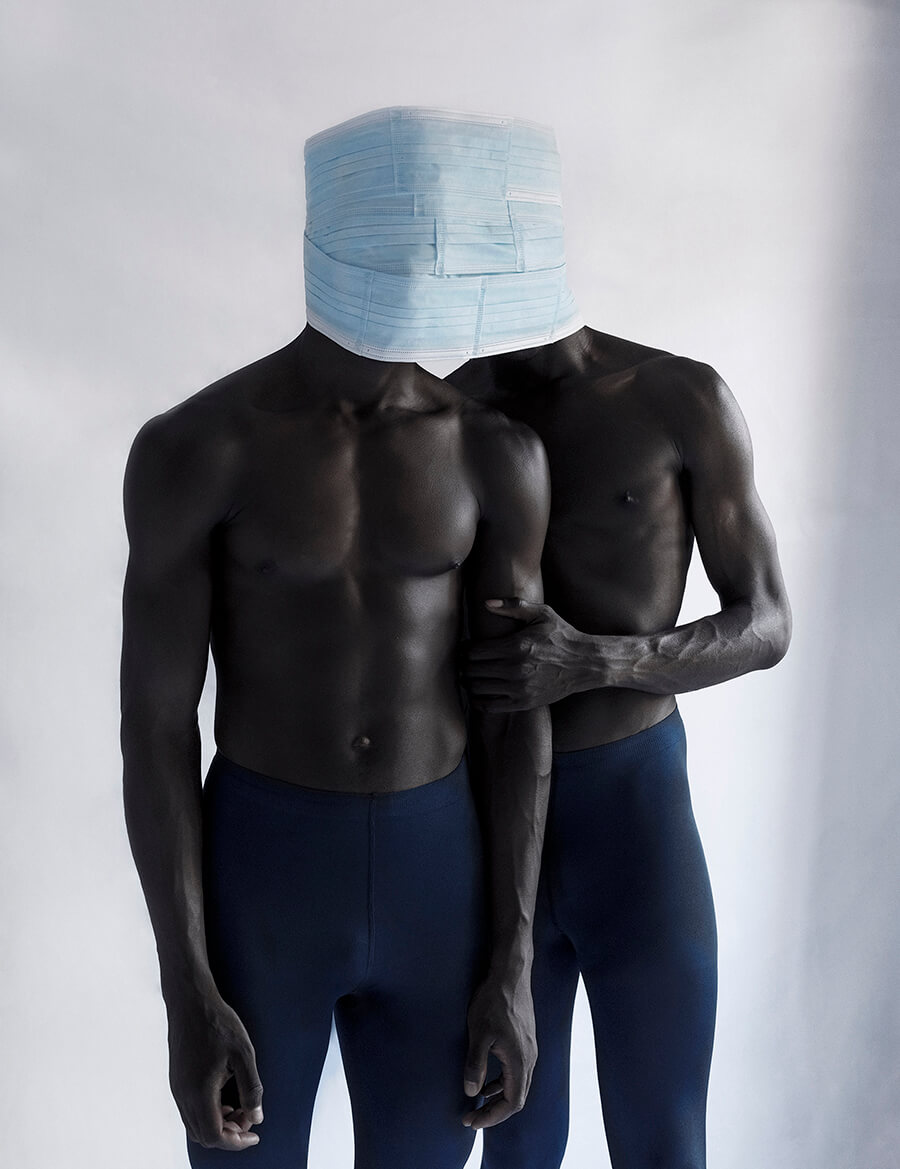