Efflorescence: The Short-Lived Beauty of Youth

We first came across Sam Peach through his series Corpus Distortions – a stunning, minimal study into the human form, reducing the body into silhouettes cut and distorted through a prism of soft light. It’s a thoughtful, aesthetically rich body of work, explained in simple terms through his personal statement: “I’m trying to answer some of the questions I have about existence, humanity and myself”.

His new series, Efflorescence, is drawn through a less abstract filter, but continues to search for those answers. Each elegant and carefully crafted diptych pairs a young male model with a flower, and in doing so questions the fragility of youth, and its depiction in fashion and lifestyle magazines as a fast-paced and carefree. He explores traditional portrait and still life methods, with a very modern reaction to the industry he inhabits.

We spoke with Sam, to dig under the surface of his series – to understand more about both his conceptual intent, and his unique creative process.

Figure unmasked shows beauty’s transience,
to now be framed; an Adonis unknown.
He that knows magazine impermanence
remains nameless, cast in a lustrous tone.
And less he will become, summer fading.
The cold agency of dreams cannot last,
but instead it is replaced when ageing.
No quota for a sentimental past.
Like roses, structured, vibrant, freshly chopped,
they live shortly with our thirst, prodigious.
Must we be exchanged, succeeded, dropped,
as Autumn’s burnished blades drop among us?
I have a way to dry blooms eternal.
These, frozen by fake suns, remain youthful. 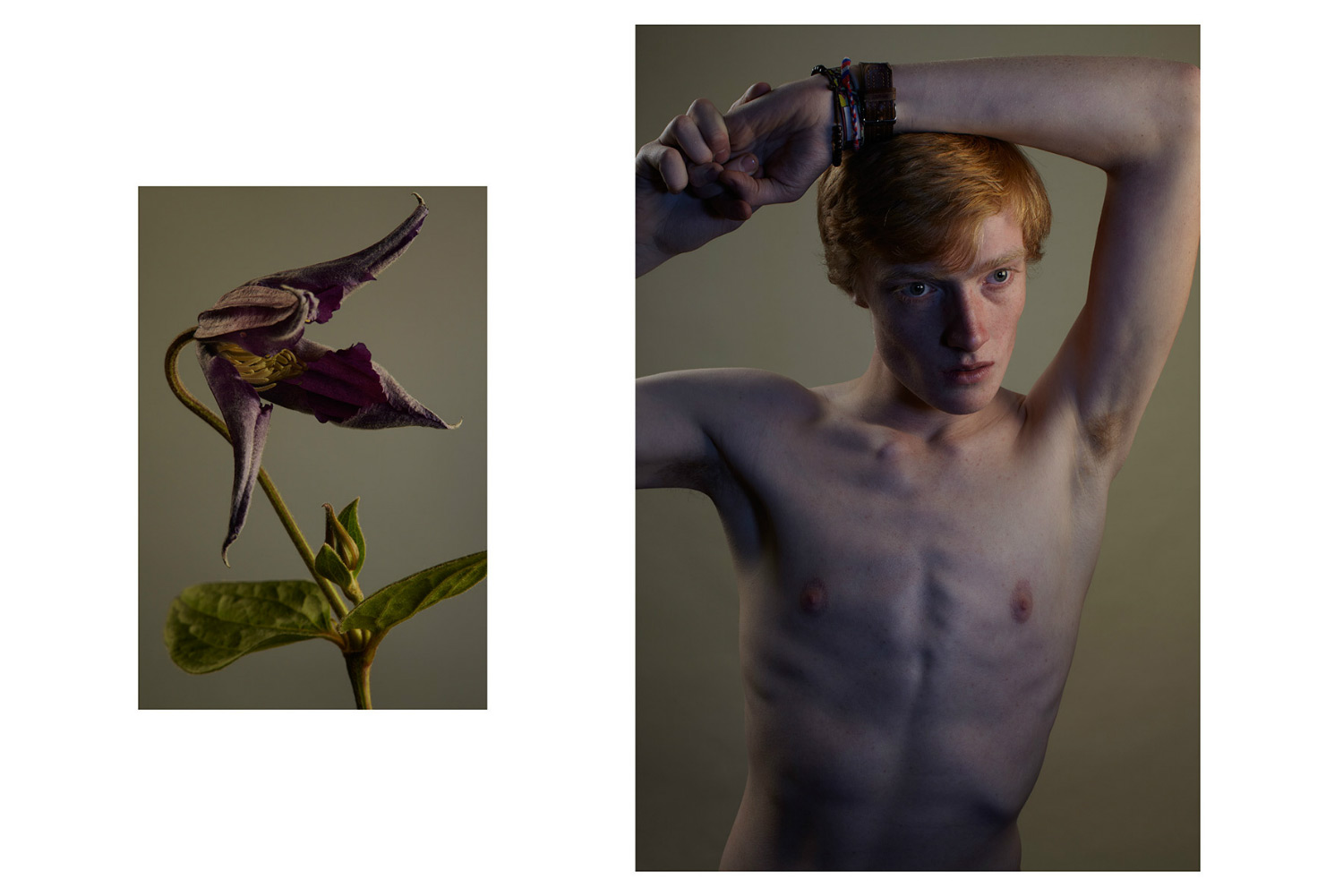 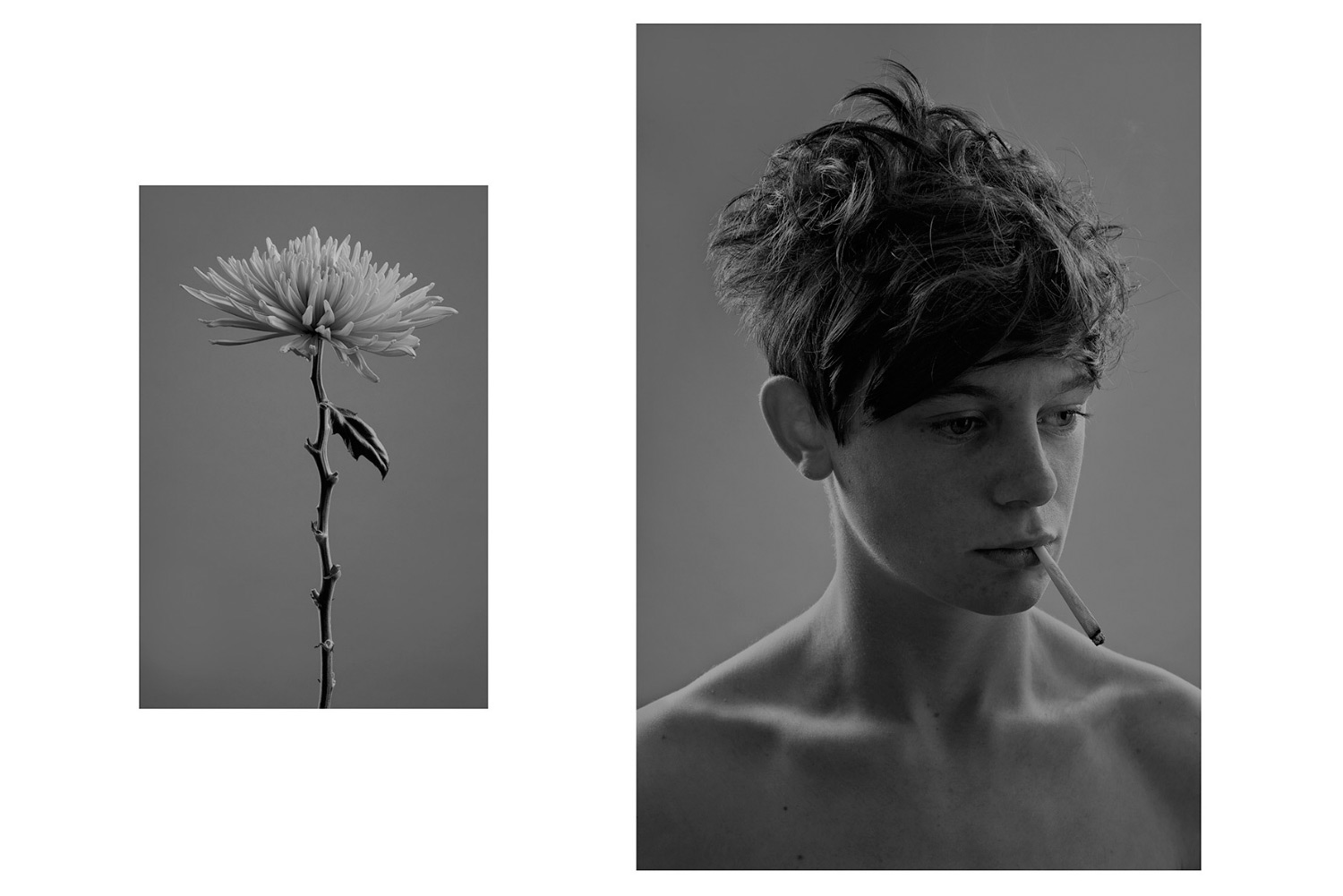 Tell us how Efflorescence came about… What was the genesis of the concept?

I didn’t set out with a fully formed concept. Initially I simply wanted to challenge the way in which I worked while constructing a series of images that had youth as its subject. I was interested in developing a slower way of working which I felt would enable me to produce a different type of portrait, aesthetically. It was as the project developed that I chose to focus on the insecurities and vulnerabilities of young men within the fashion industry and to develop the concept of efflorescence and the short-lived beauty of youth.

Tell us a bit about the process… What would come first, the flower or the model? And how did the studio process play out? I note particular care in the lighting of each image.

The project started with the portraits and was heavily influenced by Lucien Freud. I love the sadness and vacancy his works carry and I wanted to reflect these characteristics in my images. I felt these were essential elements with which to build a portrait of youth that contrasted with the care-free images in fashion and style magazines. I was also interested in his working practice; he would often spend months or even years with his subjects, refining his artworks. And while I wasn’t going to emulate those time periods I wanted to slow down the way in which I worked.

During the shoots I would ask the model to remove their top and then to adopt a pose of their choosing. They then held that pose for up to an hour as I worked in silence adjusting the lighting until I was satisfied it complimented their bone structure and skin tone. I found the process quite difficult at first as my natural reaction is to put a model at ease but as I grew in confidence I pushed both myself and the model, often taking the images remotely with my back to them and trying to engage as little as possible, thereby placing them under physical and psychological tension – aiming to bring their insecurities to the fore. Although I didn’t realise it at the time I guess I was treating each model as if I was photographing a still-life; working methodically but in quite a detached way.

Once I had established a way of working I then began to focus on the idea of youth (and youthful beauty) being a period of blossom and it seemed necessary to use flowers as metaphor. For these images I would pick the image of the model I wanted to match and then recreate the lighting conditions they were photographed under. It was then a case of working until I found a flower, or section of a flower, that subtly aligned with a feature of the model. This allowed the flower to intimate a fragility in the model, as well as working as a metaphor for transient beauty.

“Although I didn’t realise it at the time I guess I was treating each model as if I was photographing a still-life; working methodically but in quite a detached way”.