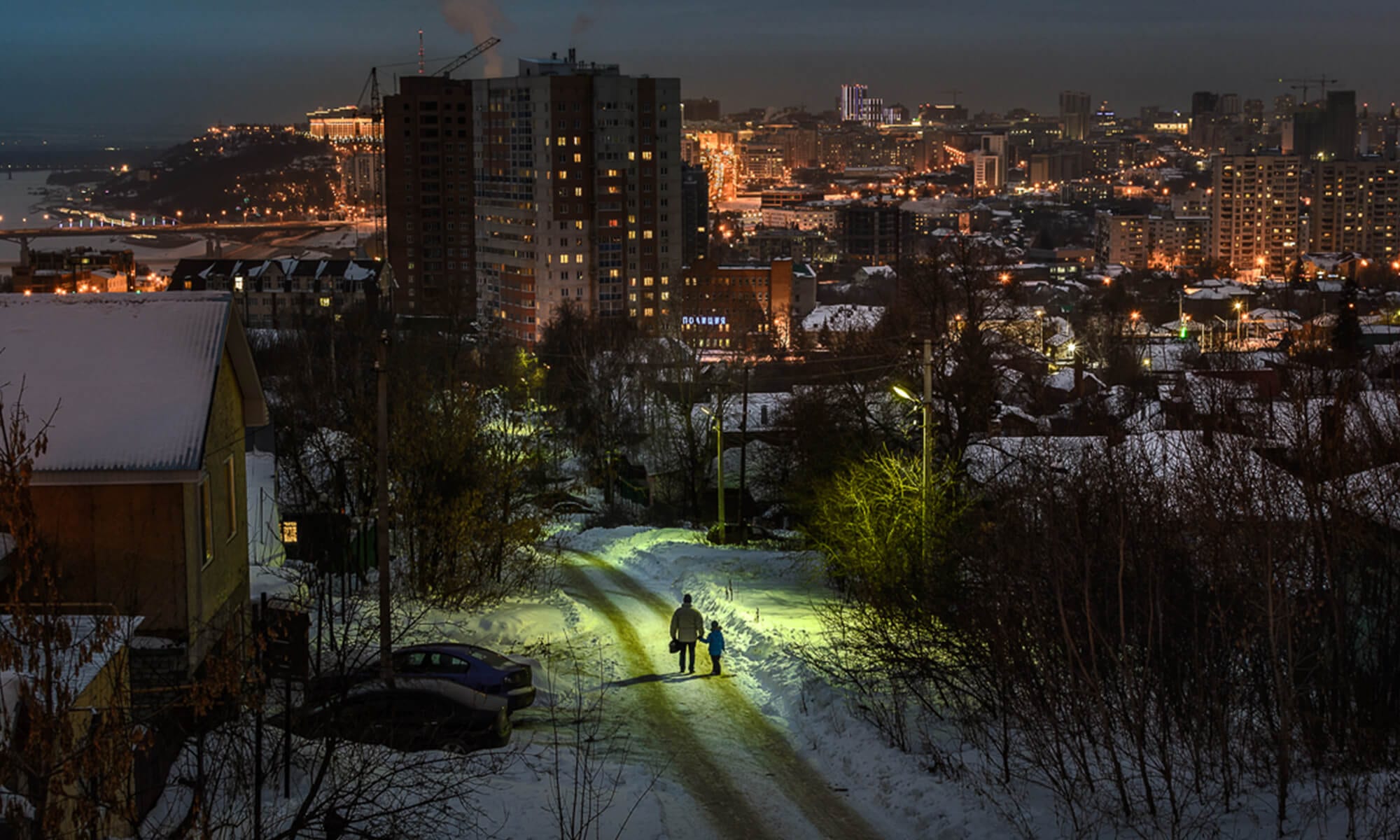 Romance, abandon, mystery, fear, subterfuge, comfort, dreams… the night is a time that’s filled with atmosphere. When the sun goes down, the senses seem heightened – be they those that allow us to experience the world with a new clarity, or with a surreal filter.

But it also presents technical challenges. For a medium that relies on light falling on a chemical film – or these days often falling on a sensor – it requires a certain aptitude to capture the reality of the night, or to bend this reality to one’s aesthetic desires. It is perhaps this combination – of artistry and technicality – that makes the best night photography so exhilarating.

Here we see images both literal and abstract, that depict vast cityscapes to towering mountains, via hotel rooms, factories and forest swamps, channelling adventure, lust, danger and ecstasy. Combining exceptional storytelling with confident execution, they allow us to share in just a few of the many narratives that arise when the sun goes down. 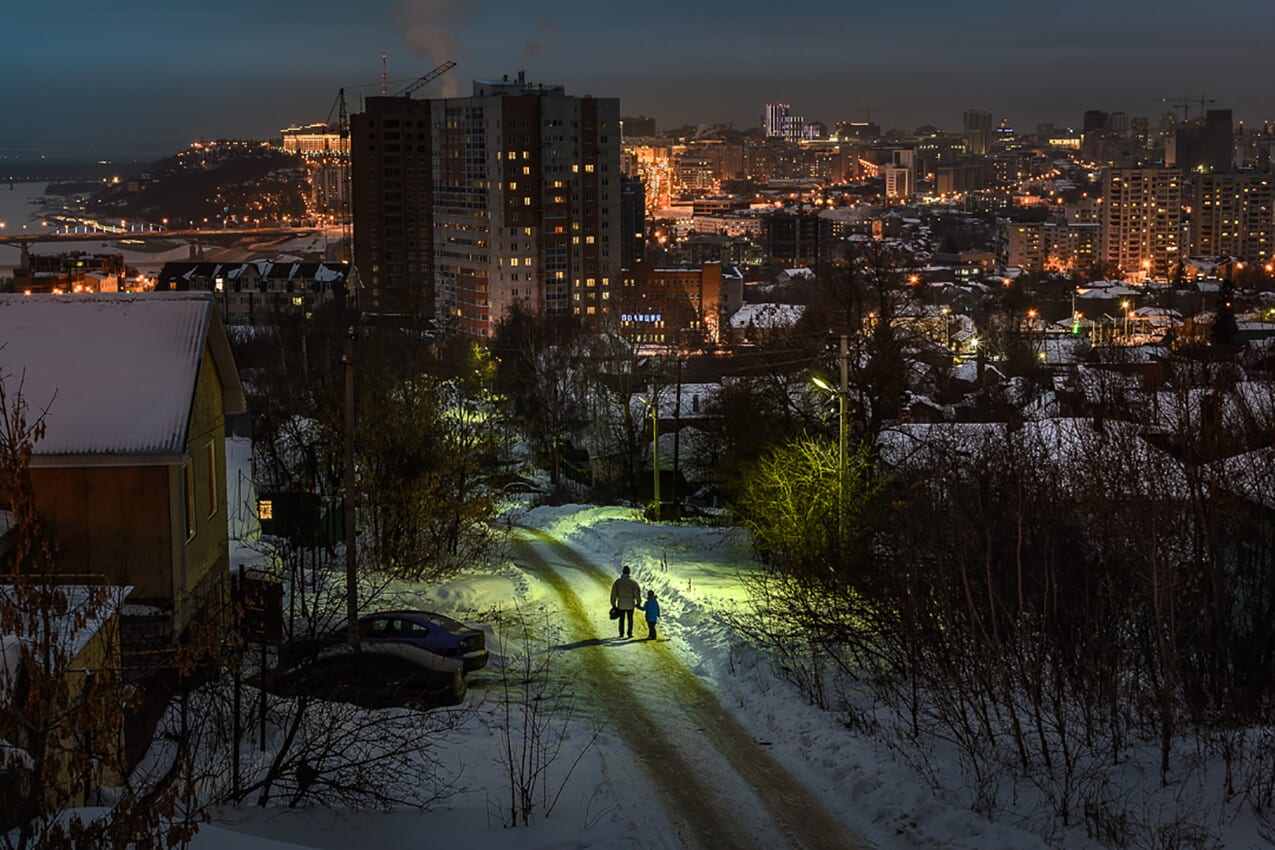 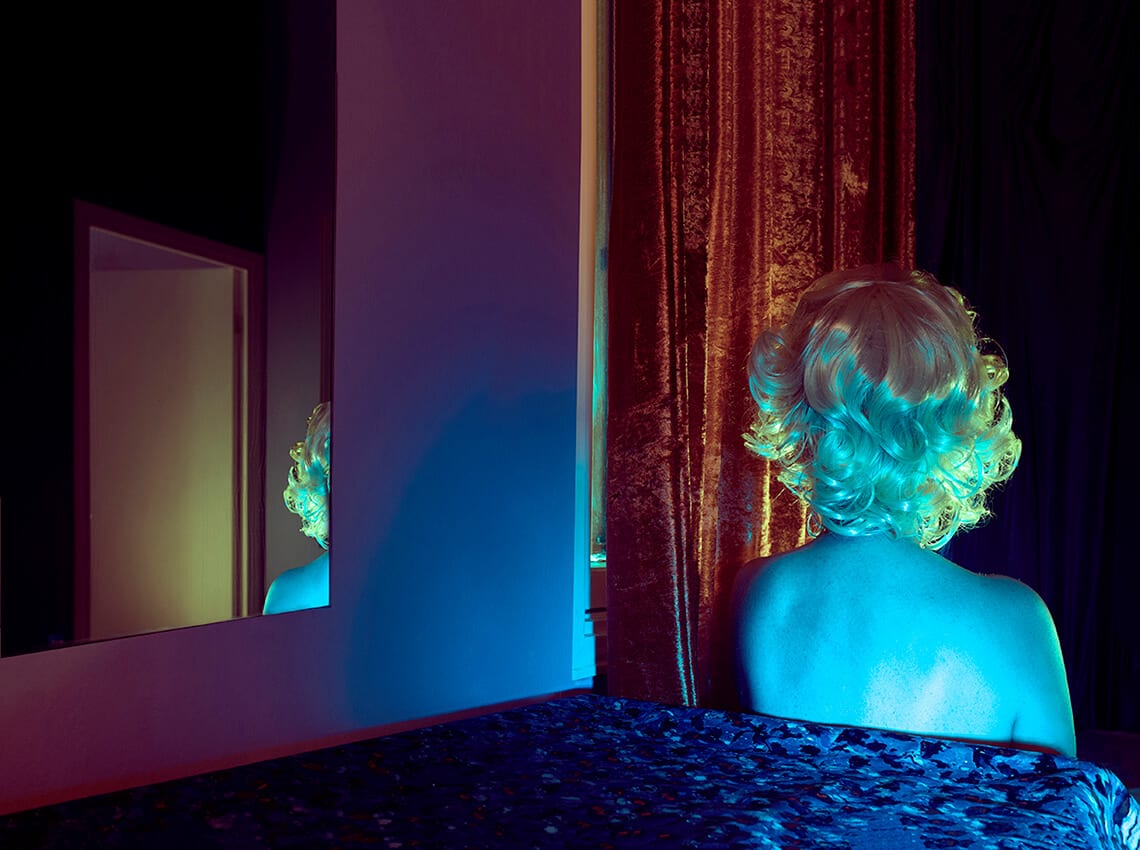 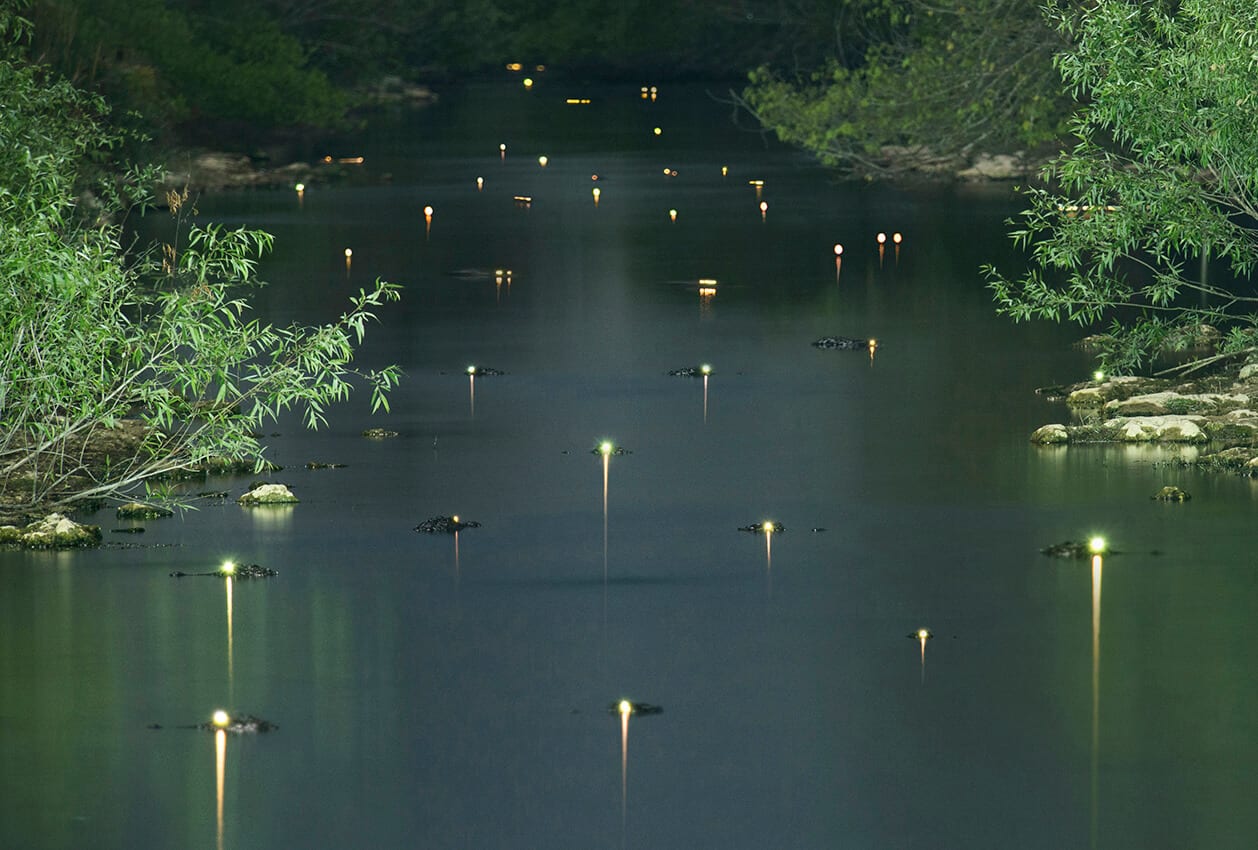 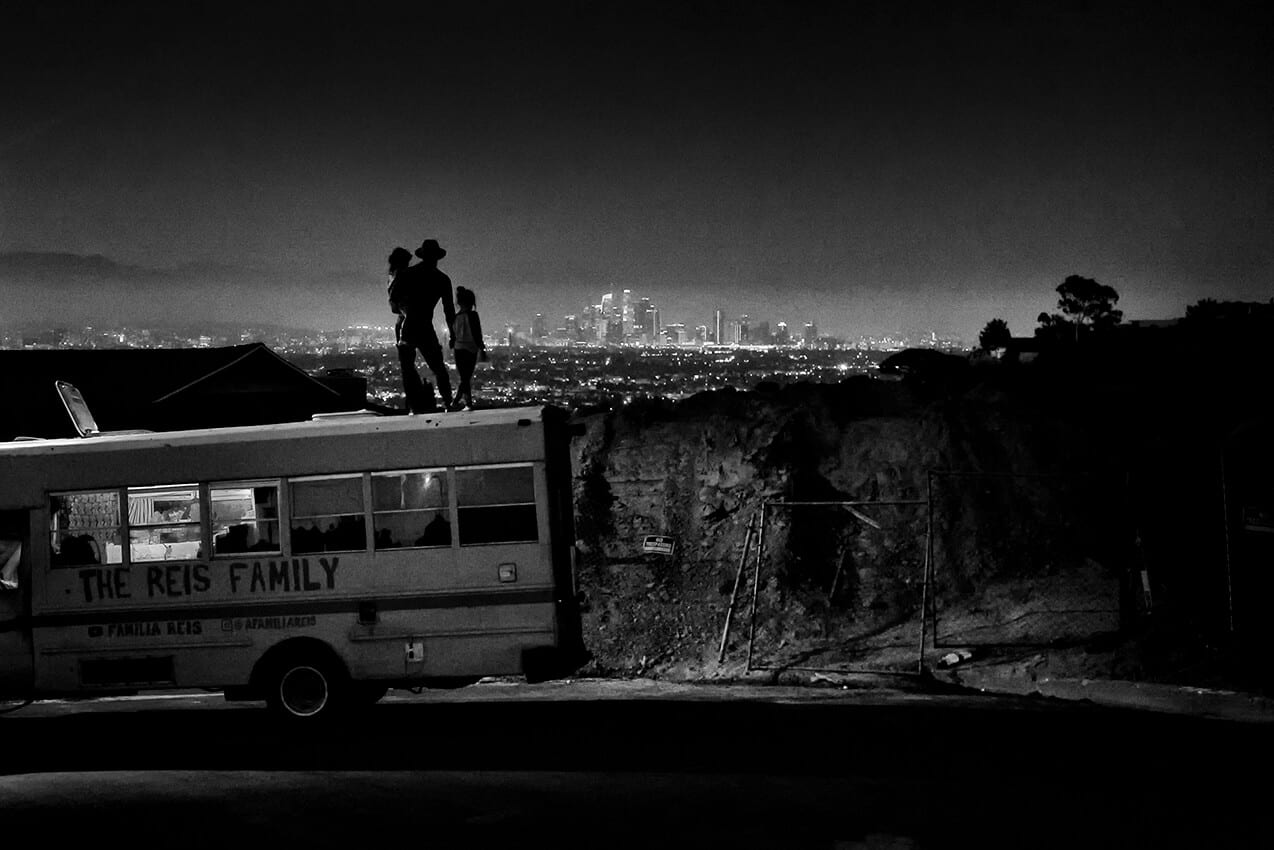 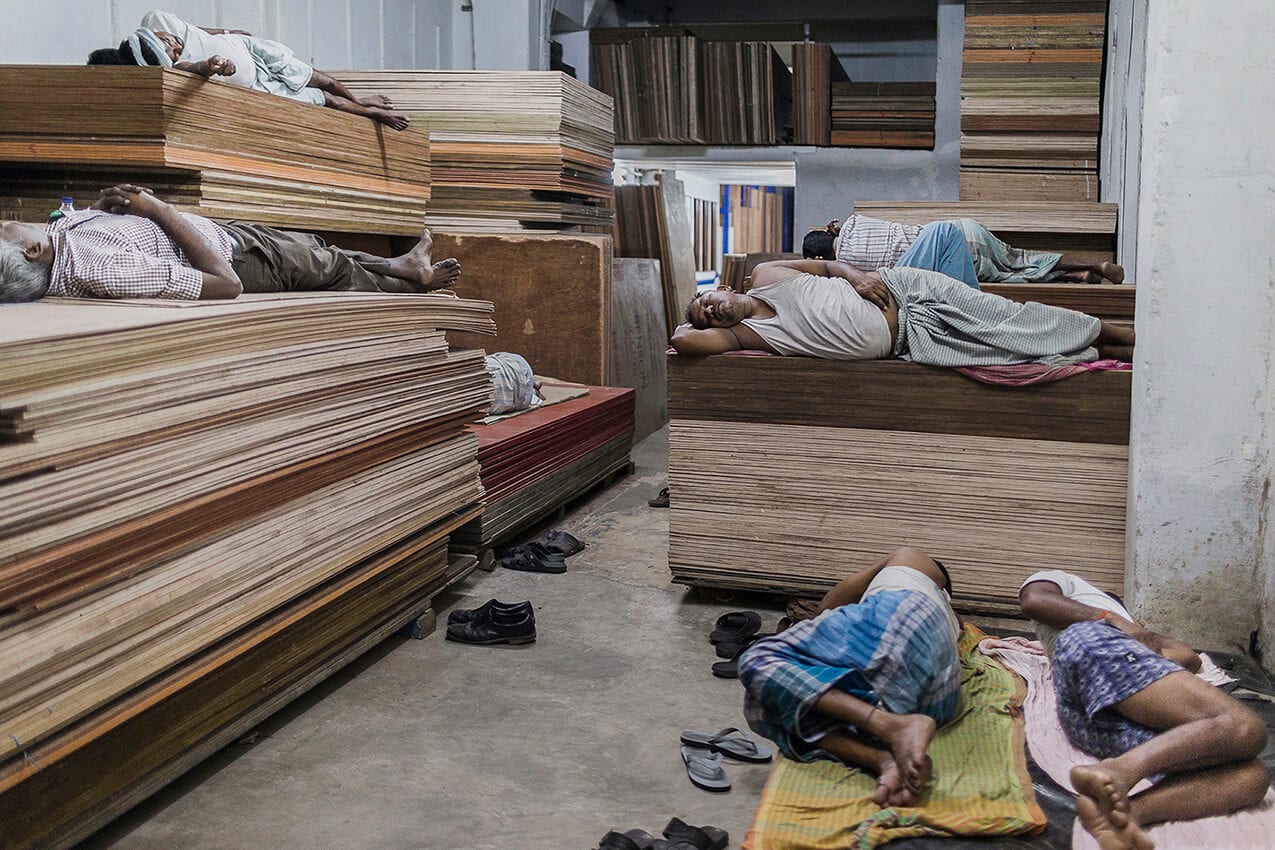 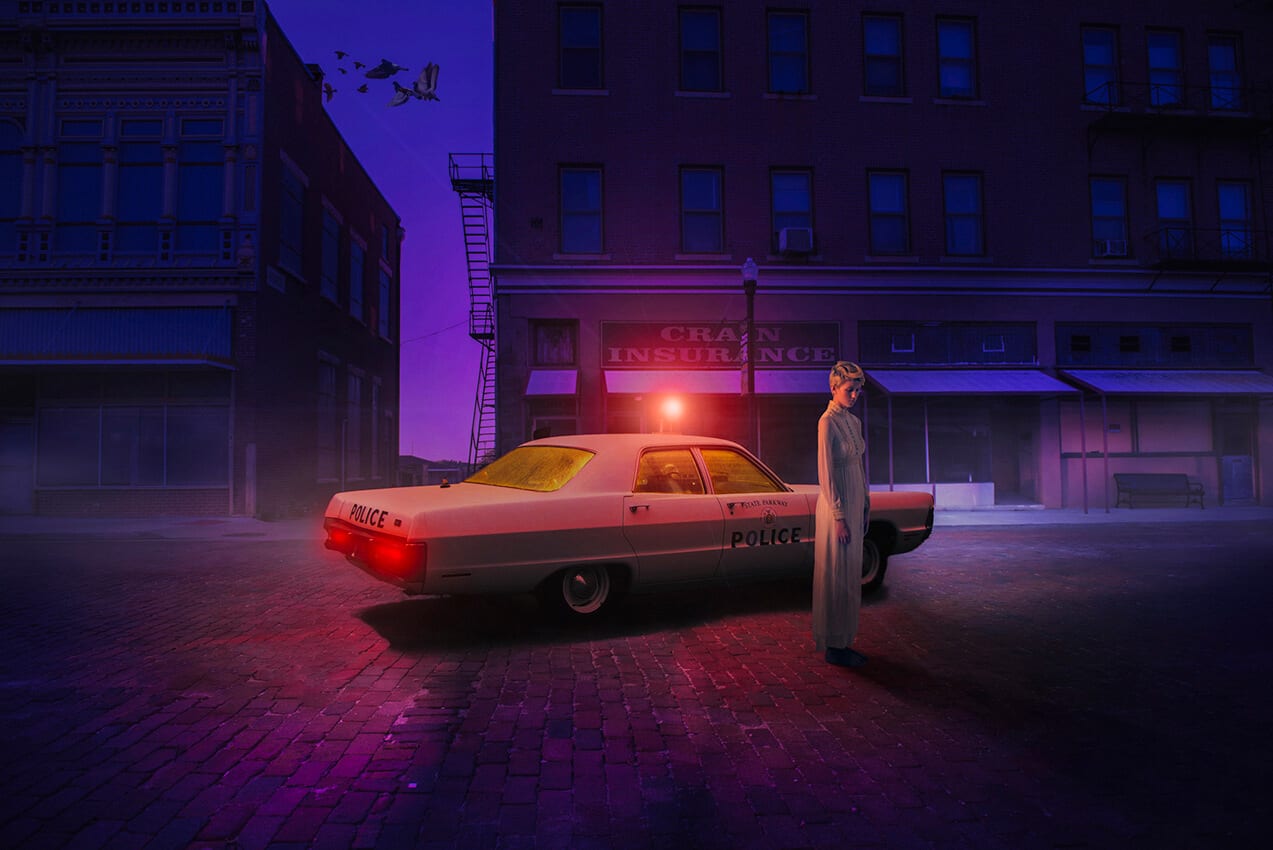 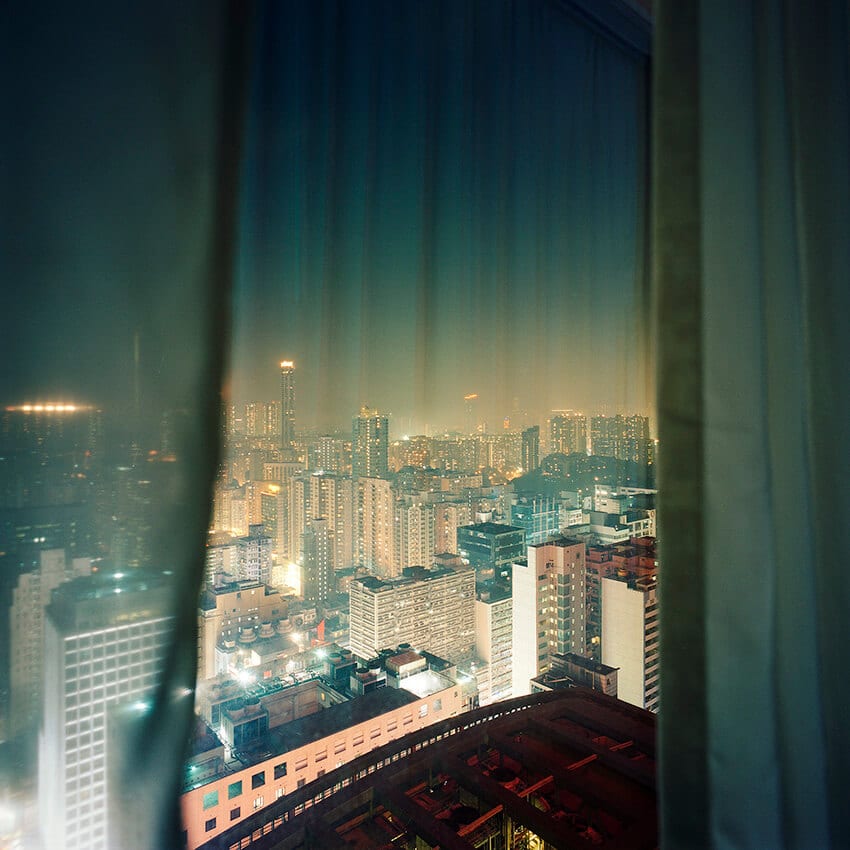 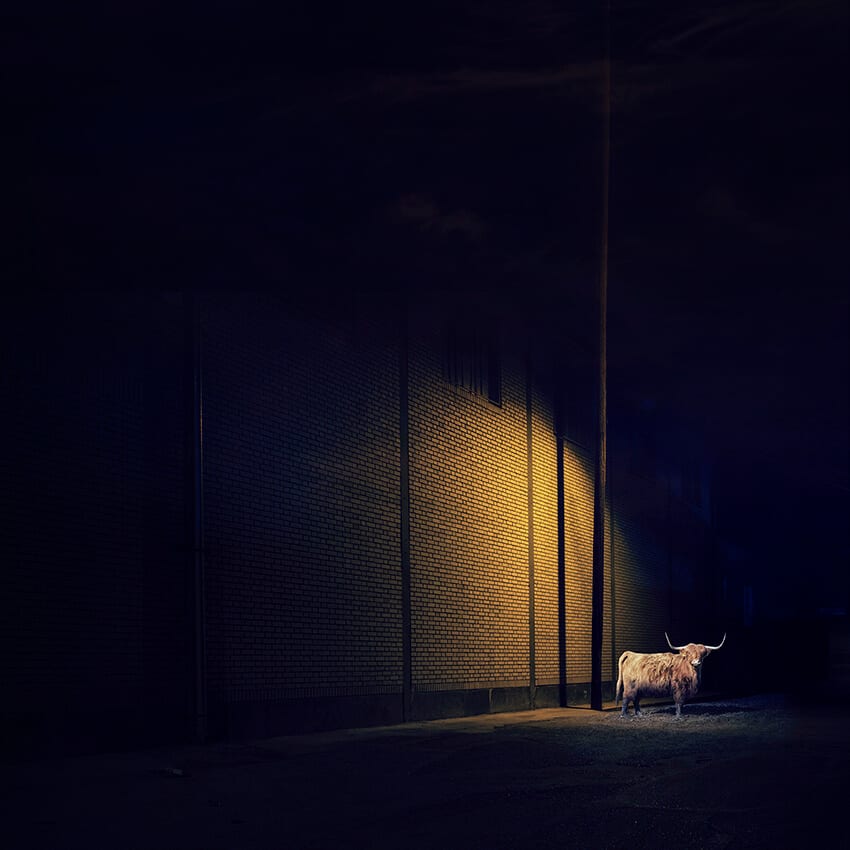 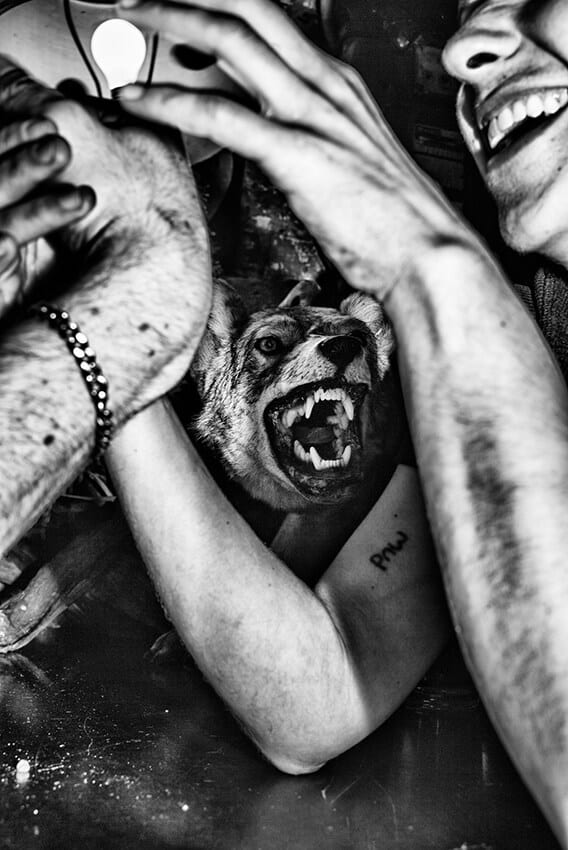 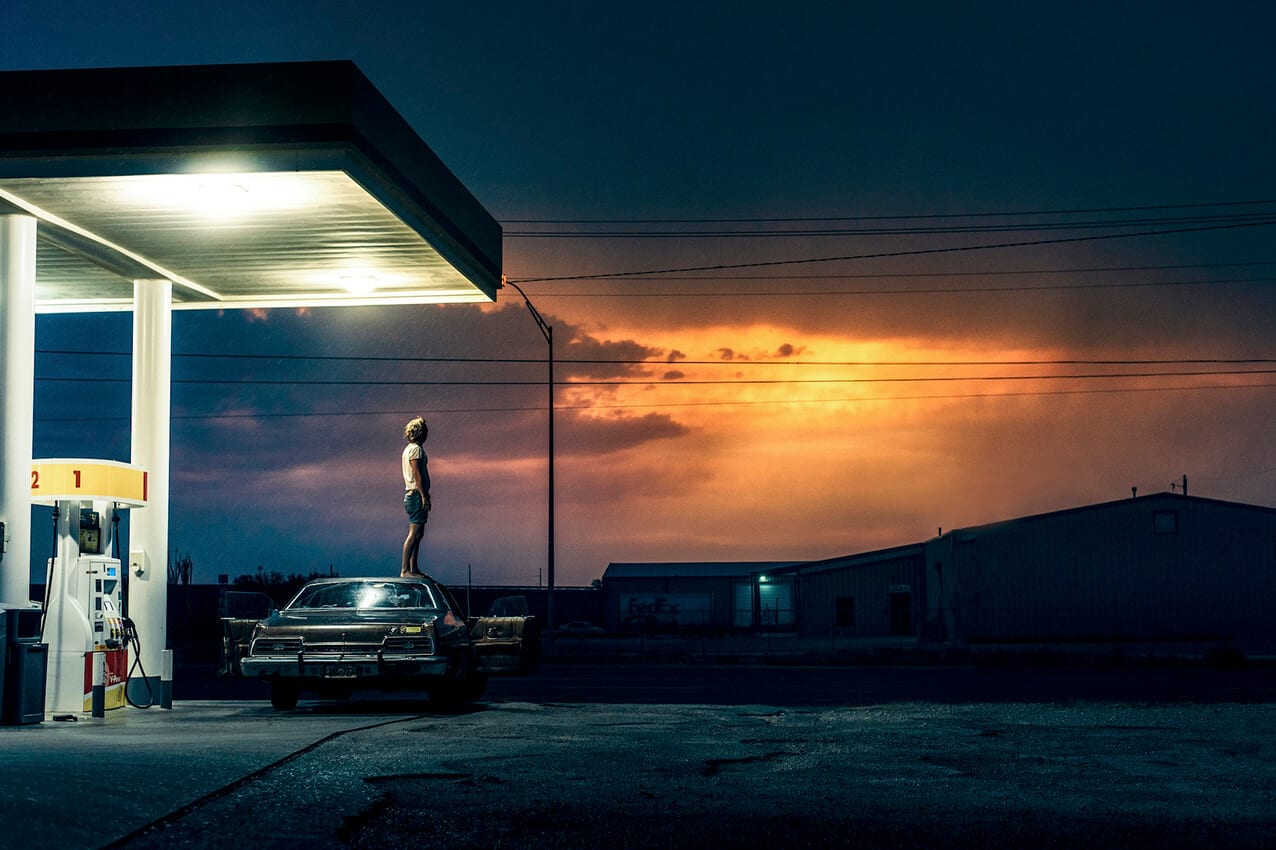 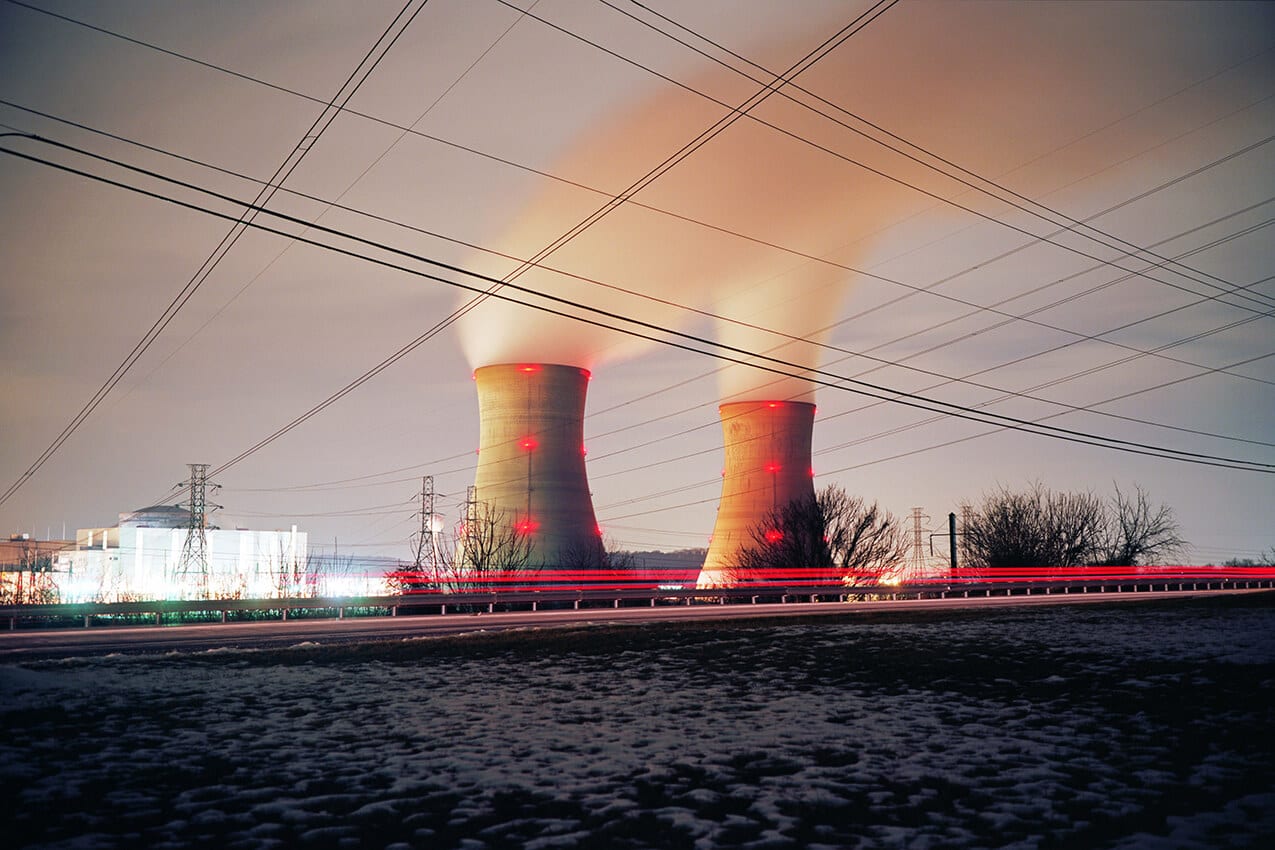 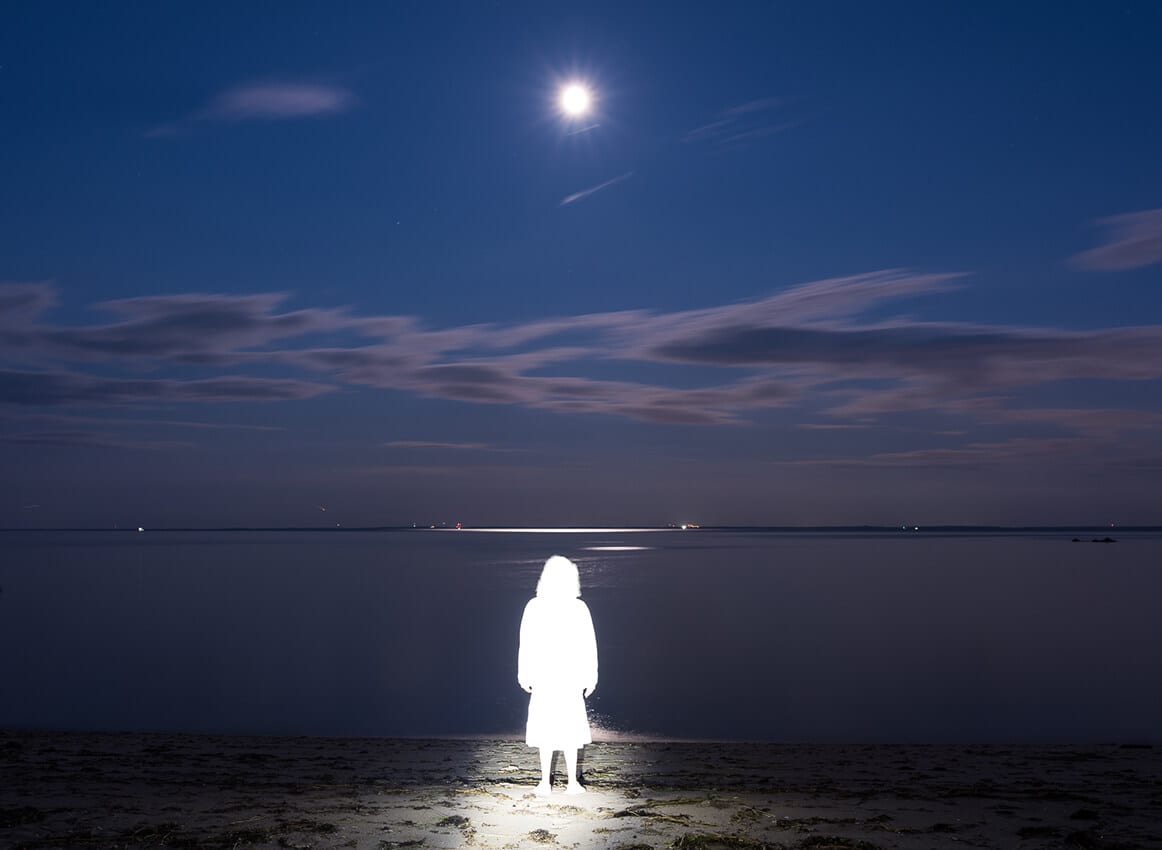 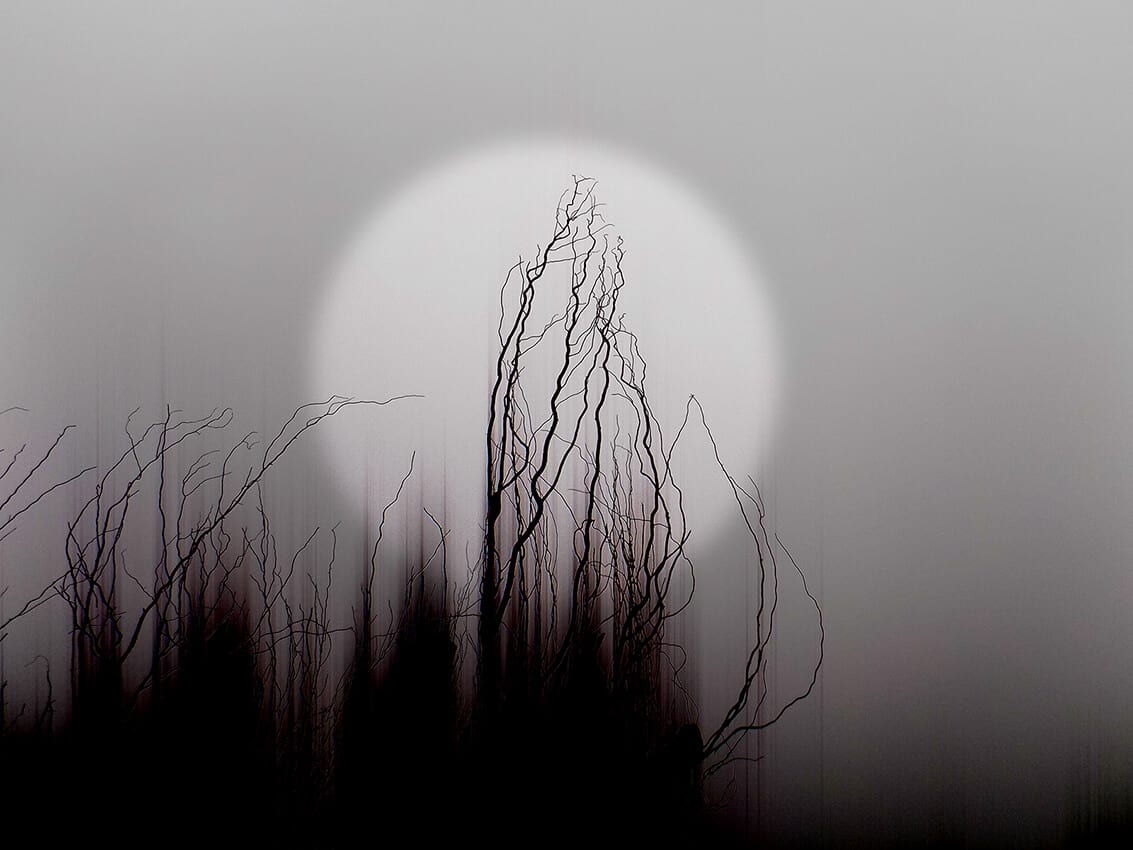 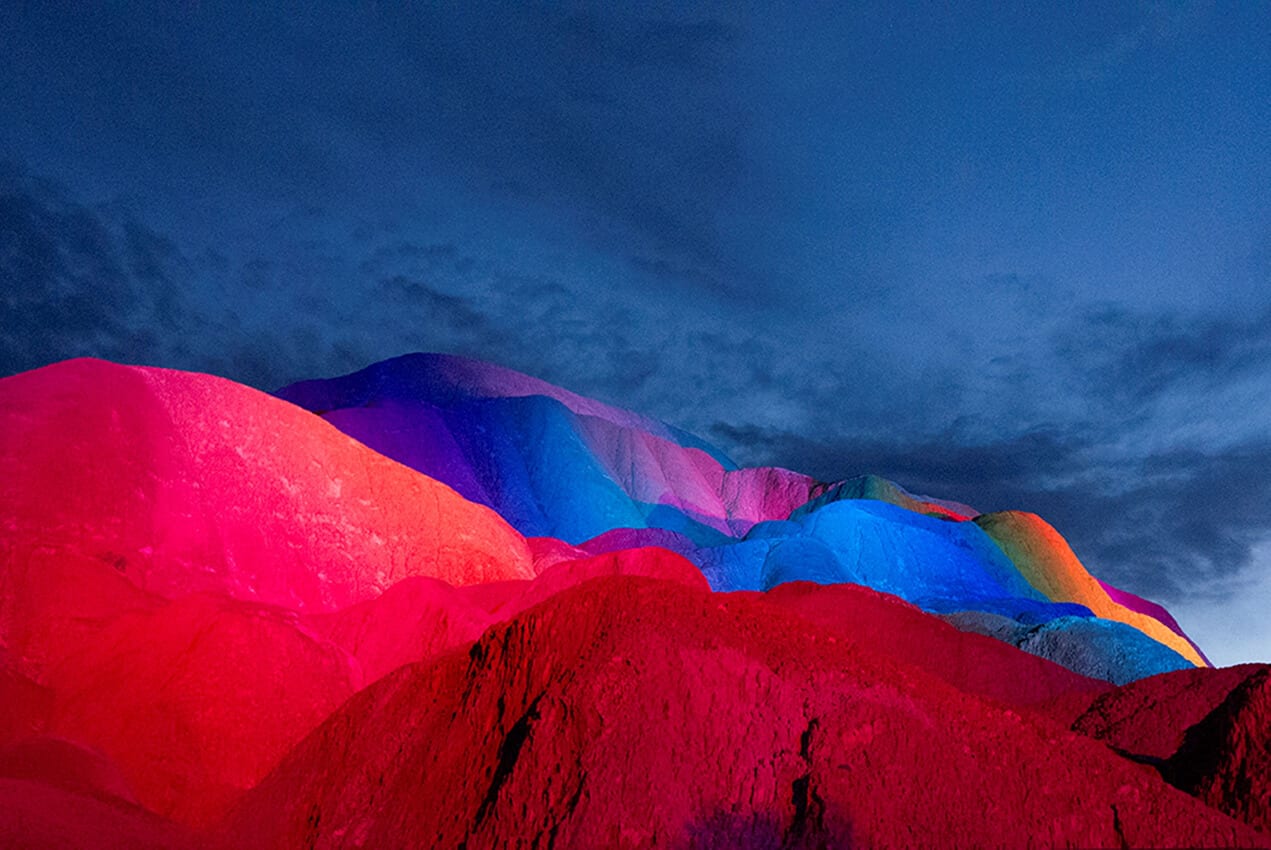 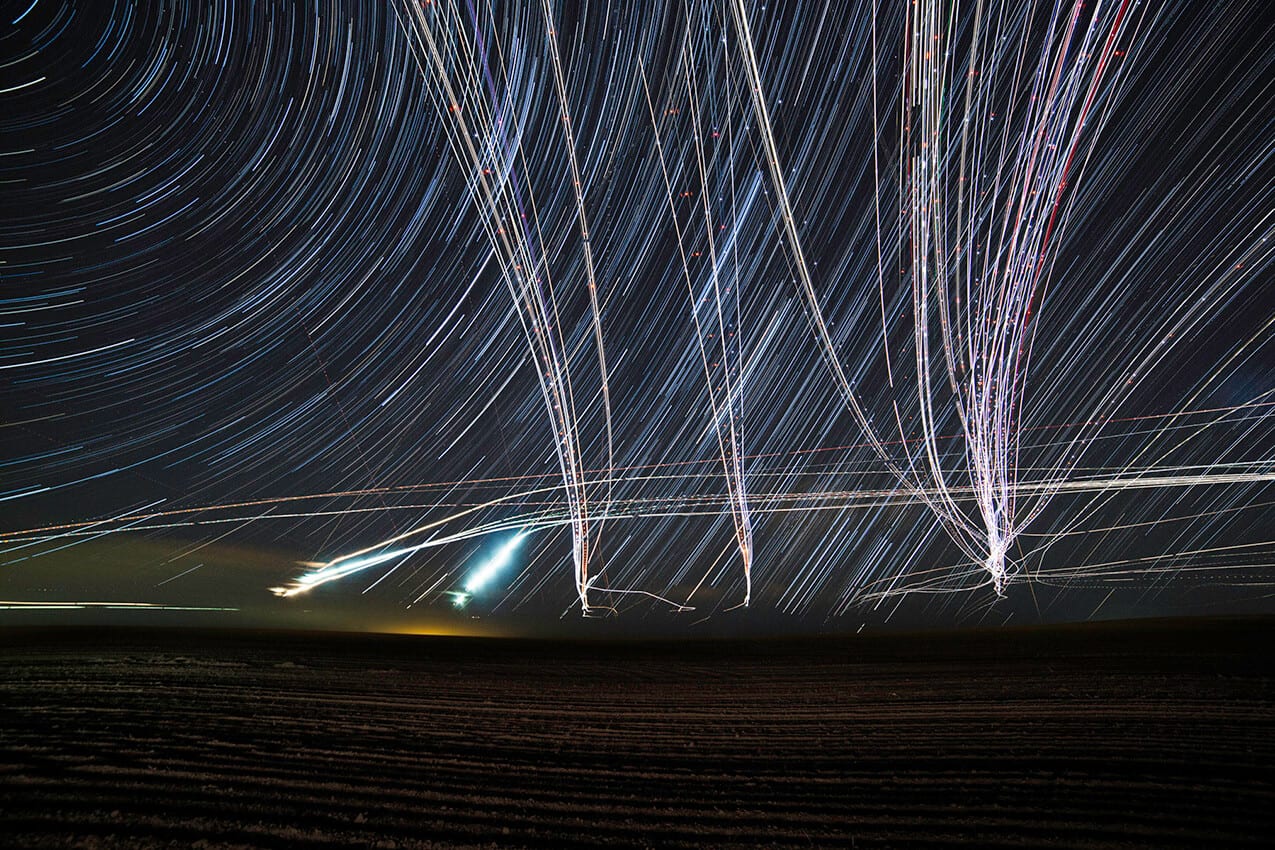 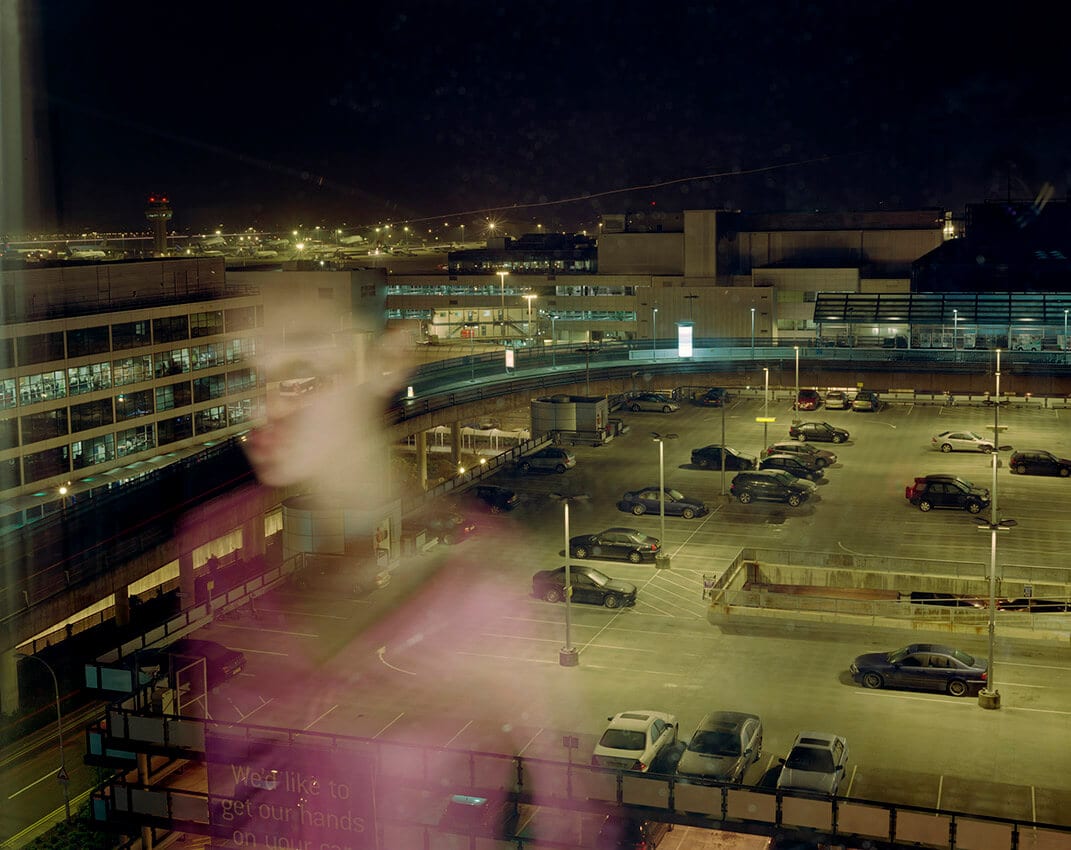 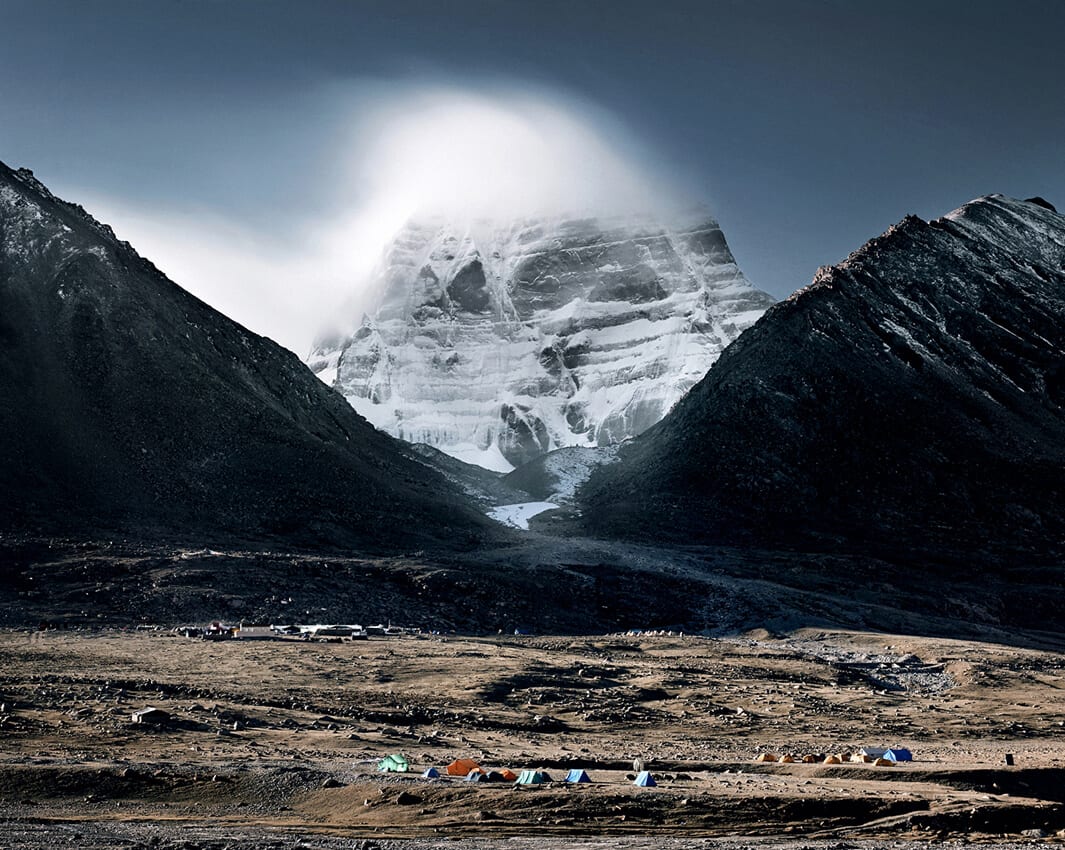 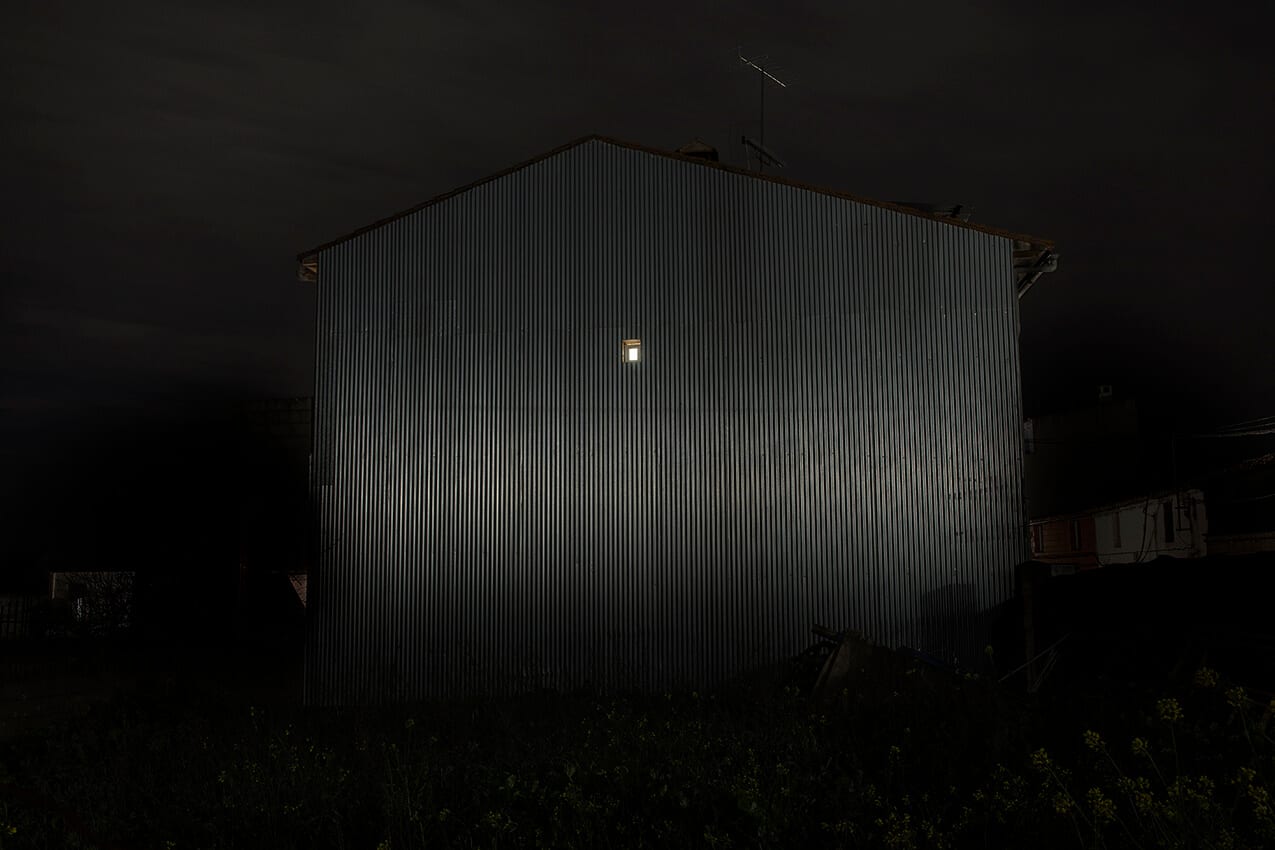 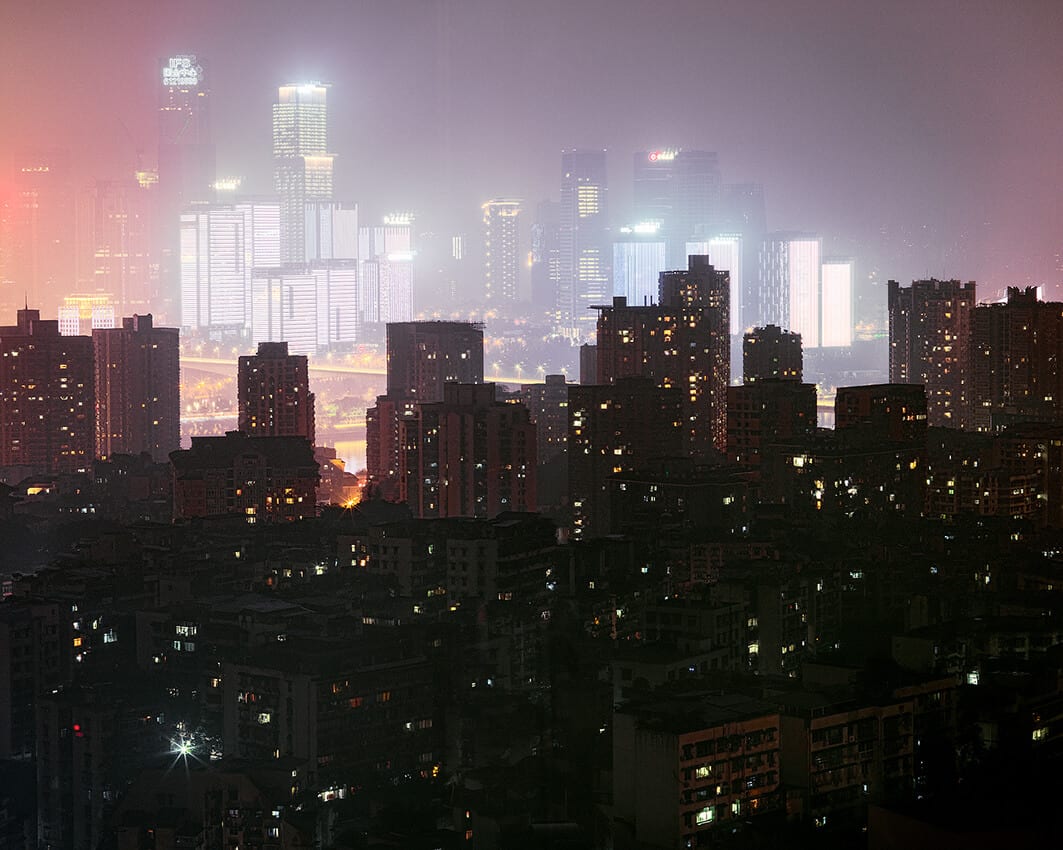 “This image has a wonderful ubiquitous narrative to it. It looks like a parent waking their child to school. It could have been taken in many cities around the world and it really has this sort of universal quality to it. Due to the time of day and the snow, it somehow has a very comforting feeling to it. Even though you know it is cold, somehow or another the intimacy of the parent and the child melt right through that cold. A worthy winner.” – Todd Hido

“This image possesses this other worldly dream-like moment that is very oblique. We see what might be a female figure, yet we don’t really know who they are. And the fact that there is an open door, a mirror, a curtain, and a hyper-vivid, almost theatrical color palette adds even more to this image being curiously confounding.” – Todd Hido

“Garret captures the glowing eyes of alligators in a swamp at dusk, the burning points of light punctuating the smooth surface of water like stars in the night sky. There is a powerful dichotomy at play – the stillness and soft colors and textures create a sense of calm and serenity, but there’s an obvious danger evident, here lurking literally under the surface. That tension is at the heart of what makes the image so compelling. It’s an example of wildlife photography that feels artful and unexpected.” – Life Framer

“This image captures the wide-eyed adventure of exploring the world with the people you love. It encapsulates the freedom and excitement of taking the path less travelled, but also the reality that brings – this family feel so distant from the city lights, both physically and metaphorically (and the “no trespassing” sign is a lovely subtle touch). In terms of technical execution, the image is a little lacking given the amount of sensor noise, but somehow it works here, giving the image a painterly quality that compliments its emotional punch.” – Life Framer

“In this remarkable, intimate scene, workers at a timber yard sleep in a storage room – the stacks of wooden panels repurposed into bedding compartments. Manu crops the frame tightly to emphasise a closeness, and presents more questions than answers – are these workers taking a quick nap during a shift, or is this where they spend the night? Is it a resting place of happy convenience, or of sad necessity? With questions over workers’ rights in global supply chains, these are questions one cannot help but broach. It’s perhaps the dazzling lights that make the scene jarring as much as the unforgiving beds, but the evident companionship also creates a sense of warmth.” – Life Framer

“Justin meticulously crafts this scene, with wonderful composition, lighting and digital enhancements. Drawn in a vivid, evocative palette, it’s ripe with intrigue – an empty street, a lone figure who appears totally out of context, and the owner of the police car nowhere to be seen. There is a heightened sense of anticipation, and only a group of birds in flight to disturb the stillness. Oblique in its meaning, it’s nonetheless a fascinating, suspenseful image that draws on cinematic themes to great effect.” – Life Framer

“Taken from within a hotel room, with net curtains that sensuously merge with the radiant city lights, Jan creates a strong sense of drama in a simple frame – the separation between spectacle and solitude, between comfort and safety, and adventure and discovery. It captures quite beautifully that feeling of being an outsider in a new place, of feeling alone amongst thousands.” – Life Framer

“With meticulous lighting and careful composition – the framing is as much about what isn’t seen as what is – Milad presents a strange, surreal tableau. Channelling thoughts of late night street roaming, where the mind simultaneously, and paradoxically, is both lucid and plays tricks, we see this bull in an urban setting – totally out of place, its natural qualities at odds with the seemingly infinite expanse of brick wall. It feels illusory – a sign for something that can’t quite be deciphered. A dream with a distant meaning. It’s a wonderful example of original conceptual photography, where the complexity in its construction is masked by a total clarity in its execution.” – Life Framer

“Captured in raw monochrome with harsh shadows and light, Bastien channels the energy of partying at night, peril and pleasure in a single frame. Brilliantly framing this growling dog between the interlocked arms of the revellers, we see two sets of teeth bared – one in anger or fear, the other in glee. It’s a chaotic scene that Bastien tames masterfully, rich with tension and excitement.” – Life Framer

“Drawing on a rich history of the American roadtrip – classic cars, empty gas station forecourts, and a landscape that seems to stretch on forever – Theo presents a wonderfully evocative scene, painted in a gorgeous, contrasting tones. It encapsulates that sense of total freedom, of living in the present moment, with no control of what happens next, and no care in the world that this is the case.” – Life Framer

“Mysterious and foreboding, Joaquín channels a film noir aesthetic in this highly stylized and successful shot. We see a pinstripe shirt, suspenders and a fedora, and wisps of smoke picked out in the darkness, but attention is focused on what we don’t see – a lack of environmental clues, and the face that’s shrouded in shadow. It’s an outstanding image, with an almost unbearable ominous tension.” – Life Framer

“Centrally framing these two billowing power plant towers in a web of overhead lines and car light trails, and with a restrained palette of reds and greys, Daniel depicts the immense machinery that powers our modern world. With a dispassionate, remote vantage point, he captures a strange and alluring beauty, at odds with the environmental concerns such infrastructure creates in the natural world.” – Life Framer

“Painting his subject in stark flash-gun white, and situating her centre-frame, directly below a glistening moon, this image has an eerie, otherworldly feel to it. It feels ghostly and unreal – a mystery in the images dreamlike meaning, to match the mystery in the way Lane produced it.” – Life Framer

“Taken from a series aptly entitled Unity of Time and Place, Ellen composes an image of simple elements to wonderful effect. Clawing upwards, these wiry branches are softened by a lens blur that draws the eye up through the frame, settling on the huge full moon. It’s sparse and hauntingly beautiful.” – Life Framer

“This image may appear abstract and intangible, artificially staged either digitally or otherwise, but in his statement Woo outlines the context and candid nature of the shot. He describes these Chinese mountains, close to the border of Tibet, lit up in rainbow colors by the fireworks of Chinese New Year celebrations. And the result is wonderful – strange and alluring and vividly psychedelic; a powerful contrast between the natural and artificial worlds, and a superb example of lateral, creative photography, directing one’s gaze away from the obvious. Commenting on how everything is fabricated and packaged in a kitsch way in China, Woo shows us that not even the natural landscape is safe. It’s a fun, playful and mesmerizing image.” – Life Framer

“Just like slow shutter speed trails of car headlights, images of this genre risk being a little trite and unoriginal, but Pete avoids this trap with a scene that is both visually interesting and conceptually meaningful. We see the traces of airplanes in the night sky criss-cross with those of the stars – a latticework that describes movement both natural and man-made. Motion in our atmosphere, and far beyond it. Contrasted against a dark, empty foreground, the ploughed lines of field produce their own linear pattern, and describe a dichotomy between rural and urban, ground and sky. From Pete’s distant vantage point we’re afforded the possibility to reflect on industry and tourism, and even what the future might hold when these lines of light extend further towards the stars. ” – Life Framer

“Julia creates something that feels both seductive and mundane. A non-descript carpark on the edge of a nondescript airport, and this mysterious figure reflected in glass, watching over silently. It feels poised with intrigue – is she waiting for someone to arrive? Is she waiting to leave? – and just a little foreboding. Whether deliberate or not, the partly obscured billboard below her chest – “We’d like to get our hands on your…” is uncomfortably suggestive.” – Life Framer

“With a slow shutter speed that pulls night towards day, Samuel documents pilgrims who’ve made the intrepid journey to worship at the base of Holy Mt. Kailash in Western Tibet under a full moon. The frame is compartmentalized into three distinct sections, with the dark and imposing faces of rock in the middle ground seemingly parting to reveal the mount itself. Shrouded in snow and a soft blanket of opalescent cloud, it appears magical – a vast peak with an aura that reflects its significance for those that worship at its base.” – Life Framer

“Here we see a bleak and artificial scene punctuated by an almost comically small window of light – a tiny, oblique clue to whatever hides behind this imposing corrugated iron façade, and that Oskar is not alone in the pitch black abyss that surrounds it.” – Life Framer

“Framing two separate zones of high-rise separated by the river in Chongqing, Maciej creates a striking scene of two halves – the foreground city enveloped in darkness, with pinpricks of light signifying life and activity, and the background city awash with an iridescent, awesome glow. It’s an arresting contrast, that feels inspiring and overwhelming – the power of a modern city that buzzes with life.” – Life Framer