An interview with Kristof Huf

“I’m trying show the dignity of people, rather than highlighting a flaw of society. To give an individual and proud face to an anonymous collective or even a blunt statistic.”

German documentary photographer Kristof Huf won our YOUTHHOOD competition with an arresting image of young boys playing in the Roma settlement of Lunik 9 in Slovakia. Our judge Greg Miller praised it for its immersiveness, and for the use of darkness and light as a storytelling tool.”

Keen to know more about Kristof, about his work and what drives him as a photographer, we put forward some questions. And his answers, including how the project started, a heartbreaking story of a Roma couple he met in Lunik 9, and what he’s learnt from his photographic heroes were as engaging and provocative as his images…

Hi Kristof. Firstly, congratulations on winning our Youthhood theme. What did you make of the judges’ comments? And can you tell us a little bit about the winning image and what it means to you?

I took this image in Lunik 9, a borough in the city of Kosice and the largest community of Romani people in Slovakia. Life in Lunik is so tough, I have a hard time putting it into words. During my first stay, I met a young couple named Beata and Peter. At that time Beata was pregnant and they lived with their extended family in one of Lunik’s high-rise buildings, a sixteen-person household in one tiny room. Having worked in the UK, Peter spoke English perfectly and he agreed to show me around. Peter made it possible for me to collect intimate insights of the community which otherwise, I guess, I would have been denied.

I had to come back a few months later to take this picture. Beata was a young mother then and Peter was in jail. (Nobody could tell me what he had been accused of.) During this second visit, Beata took on the task of guiding me. We met the two boys, they showed us some parkour tricks and then I took this portrait of them standing all proud in the doorway.

Why do I tell you this story? I guess it’s because this image has a sad twist for me. When I went to Lunik for the third time this summer, Beata’s mother told me that it was now Beata who was in jail. Peter had been released but then he fell from the balustrade of their building onto the concrete street one night. He hurt himself so badly he died. I cannot be totally sure about the details of this drama for I have to depend on what I was told and verbal understanding was very poor. However, in my eyes, this brutal incident is emblematic for the life of the Roma in our times. As you can imagine, the story of Beata and Peter left a lasting impression on me and remains connected to this picture.

Coming back to your question, I would like to thank you. I am proud to get this recognition for my work. And as happy as I am to win this award, I am even more delighted about the precise and poetic comments by the judges. They mean a lot to me and push me to keep on going.

I believe it’s from your work-in-progress series “How do you know if someone loves you?”. Tell us a bit about that – the story you’re trying to tell and how it came about…

Yes, it is. The main subject of that series will be about the People in Svinia. Svinia is a village in eastern Slovakia consisting of two settlements of similar size of which one is inhabited by Romani only. Set in the centre of Europe, the Roma part of Svinia is haunted by unemployment, exploitation, violence, drug use and resignation. What I am trying to achieve is to show the dignity of the people living there, rather than highlighting the flaw of society. To give an individual and proud face to an anonymous collective or even a blunt statistic.

Now why Roma? The first picture that I felt had any kind of value and gave me the confidence for continuing photography was a portrait of a young Roma girl in Athens. It all started from there.

How would you describe your photographic style? What are you hoping to convey to viewers?

Oh, that is difficult, I wish somebody else could do that for me. I use very strong contrasts between light and dark in a rather painterly manner (chiaroscuro) and I am after complex compositions, capturing spontaneous events that coincide in one setting. Triggering hopefully empathy in the viewer. 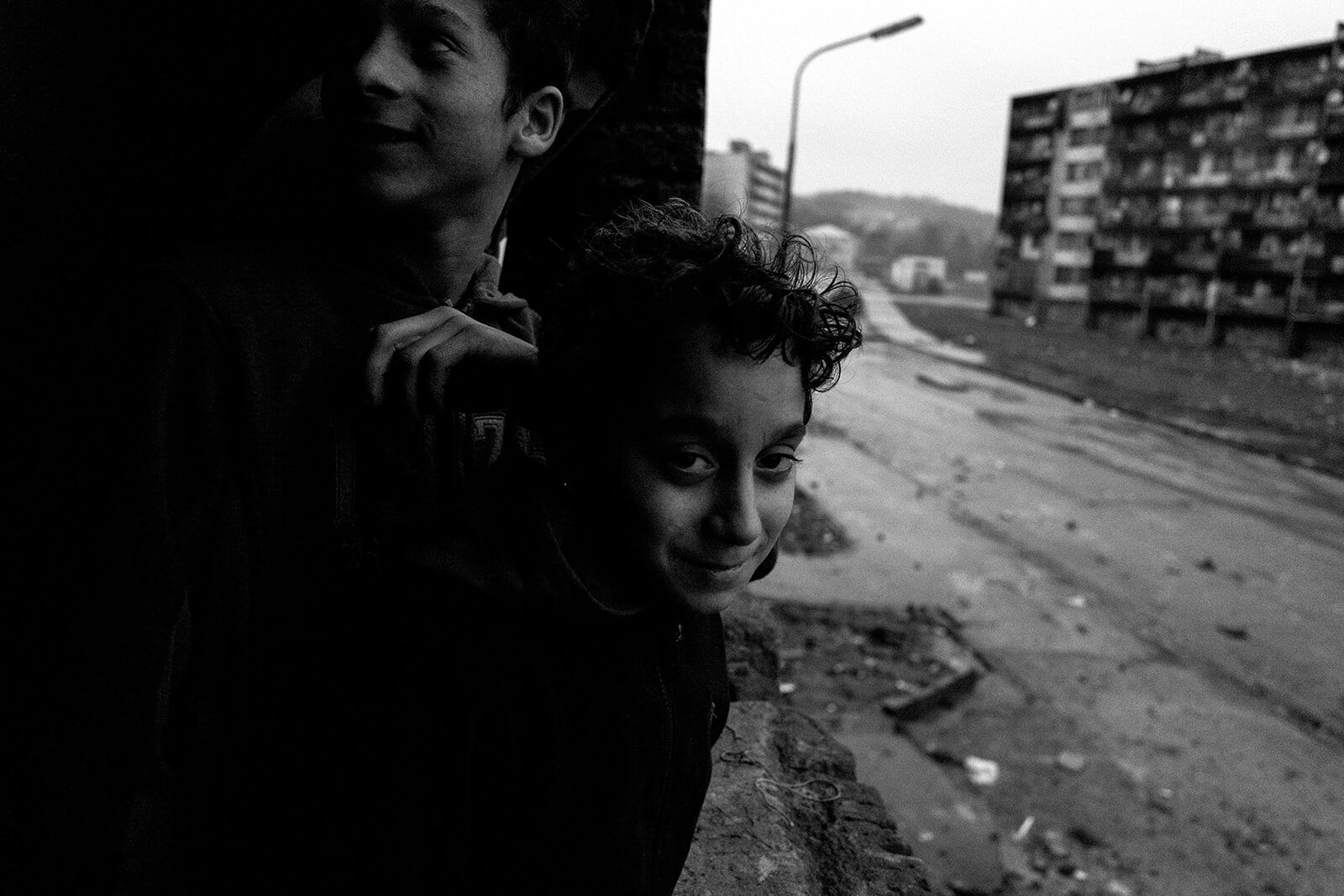 “These two boys are situated in a doorway out to a bleak, inhospitable world. We would not know that, however, from the young man’s smiling expression which is a mix of mischief and innocence. Their playfulness so defies the setting that one gets the urge, as if watching a film, to warn them of some impending fate. But the multiple scars on his face suggest that there is nothing we know that this boy doesn’t already know and probably worse. He smiles at us in spite of it all, wearing the distant streetlight like antennae he procured from the carnival.” – GREG MILLER

“An image where the duality of darkness and light works on two levels – in the striking ‘split screen’ framing, and of course in the contrast between the closeness of these boys and their smiles, and the desolate landscape they inhabit. There exists here both hope and despair, and the central subject – with an expression of knowingness that defies his years – balances precariously between the two.” – LIFE FRAMER