An interview with Julian Muller

“I’ve learned to use my eyes more, to notice light, to notice people and their energies, and to be present and more aware of my surroundings in the moment”

Julian Muller won our ‘FACES OF LIFE’ theme with an enigmatic New York street portrait, described by our judge Katherine Matthews as conveying the “conflict between the difficulty of life and the resilience to keep trying”. Keen to understand more about this image, his photographic approach, and shooting on the streets of the Big Apple, we posed some questions to Julian. His responses are thoughtful and absorbing…

Congratulations on winning our ‘Faces of Life’ theme Julian. How do you resonate with Katherine’s comments?

Thank you! And thanks to Katherine for this incredible recognition. I am honored to have been acknowledged along with so many other amazing photographers. Katherine’s words were incredibly moving for me. Why I’m drawn to certain subjects or scenes that I see on the street isn’t something I can always define in the moment, but I think she perfectly described the essence of what makes this character so interesting. She tapped into something about survival that rings true in many iconic images of street scenes and subjects. What I find compelling about shooting in New York is that it’s full of people with such vibrancy and life in the midst of tension, hardship, and struggle.

Can you tell us a little more about the image and the circumstances in which it was taken? Is it a single image or part of a larger body of work?

This image is of a man I met on the street in Harlem, NYC this past January. I remember seeing him on the corner of 125th and Malcolm X Blvd and he was very confidently rapping along to a song playing in his headphones as people were walking by and either completely ignoring him or just glancing over and continuing on their way. I noticed that he wasn’t busking, but was just sort of caught up in the music and not really going anywhere in particular. He had just stopped on the corner to rap, and that made me stop. Everything about him piqued my curiosity, from his tattoos, to his body language, to his outfit, so I decided to approach and ask to take his portrait. He posed for me, I snapped 2 shots, and then we parted ways. I wish I knew more about him or what he was doing and why, but I don’t. I normally don’t ask my subjects personal questions or try to spark up conversations with them because I don’t want to impose on them too much beyond asking to photograph them. This image is part of a larger body of street portraits that I started about 3 years ago.

Can you talk us through one or two of your other favorite image?

One that definitely sticks out to me is an image I made a couple years ago of a man I saw on 14th Street (below). He was wearing a green “cape” and all kinds of jewelry. I’m pretty sure he was an urban astral traveler who dropped by to deliver us a message from the future. He reminded me of the afro-futuristic artists like Sun Ra and Rammellzee who are big inspirations for me. Another image I like is one of a group of waiters having a smoke break off 5th Avenue (also below). To me, it is such a classic “New York” street photo. 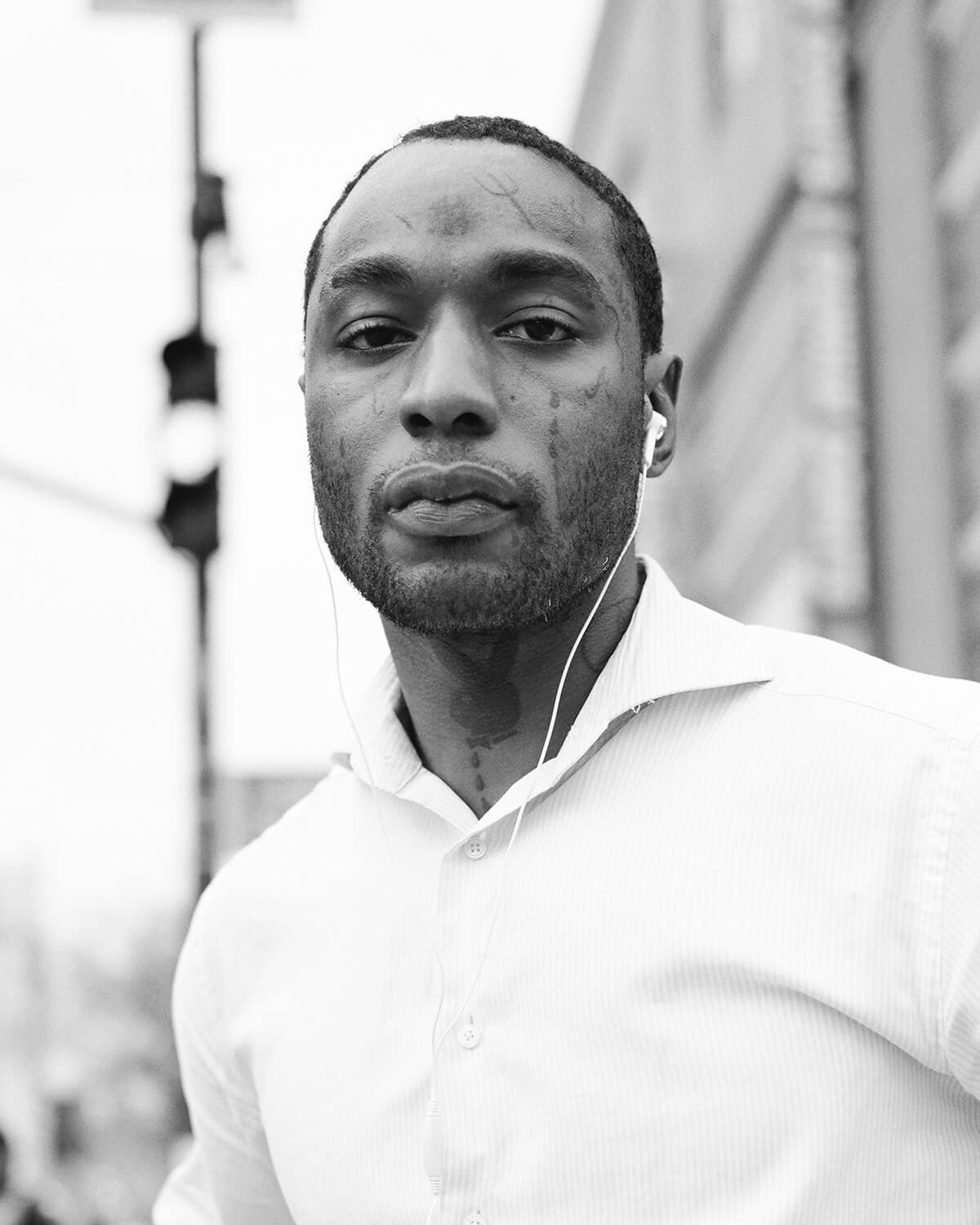 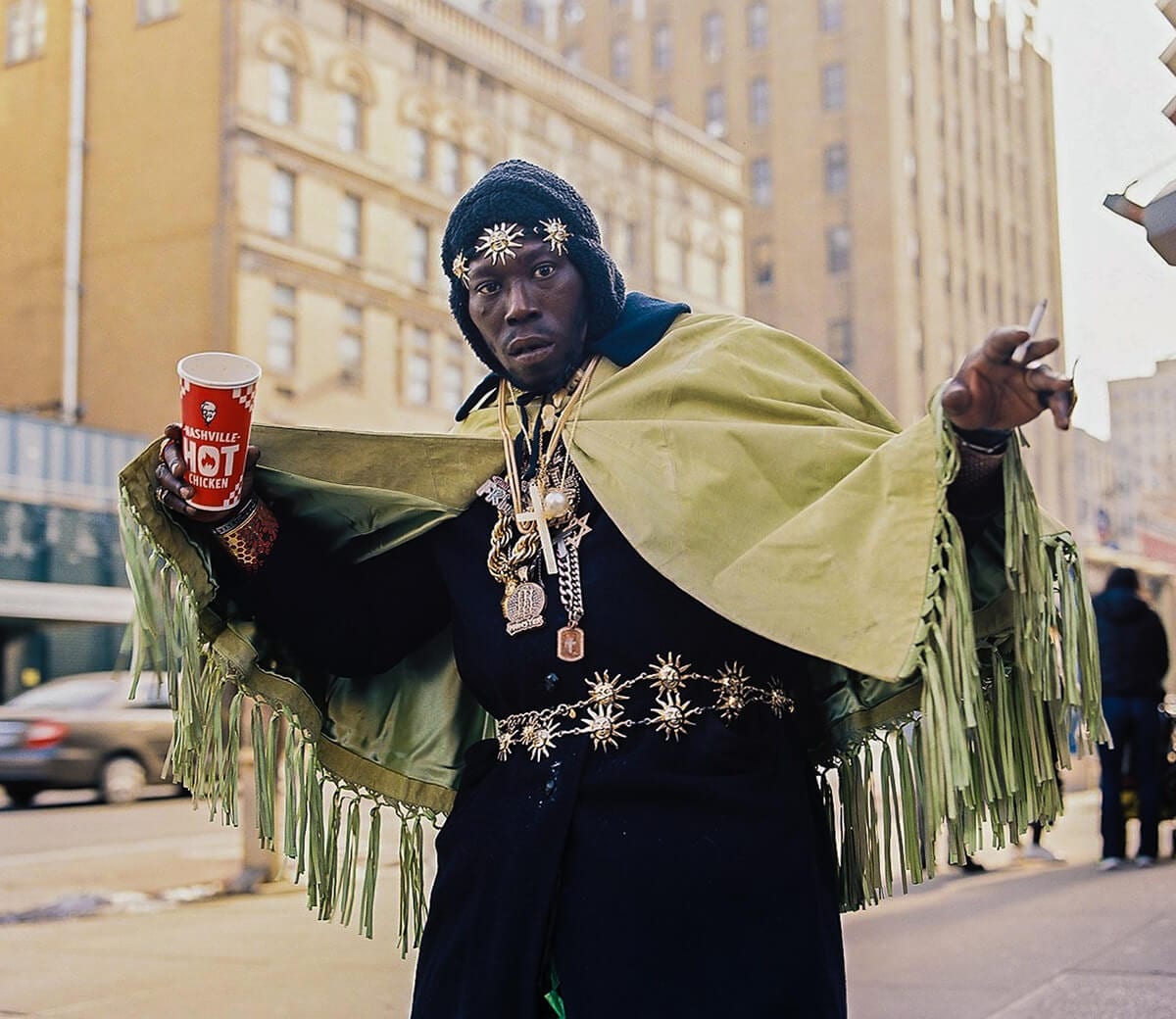