An interview with Jon Setter

“My process of looking involves acting as a sort of modern day flaneur. I wander up and down streets for sometimes eight hours at time, with no set plan for the day, trying to become one with a space.”

In just a short space of time, American photographer Jon Setter has developed quite an online following for his minimal urban photography. Paying meticulous attention to color and weight, he distills our complex man-made spaces into geometrically satisfying, sugar-sweet compositions, in no doubt aided by the endless blue skies of his adopted home city of Sydney. His visual vernacular is fresh and exciting, and enviably fully-formed for someone so close to the start of his photographic journey. We asked Jon to tell us a little more…

Tell us about your route into photography, and the role it takes in your life.

My route into photography was one that I never saw coming. It all started when I moved to Sydney four years ago. There were lots of opportunities available to me here, but I saw this as a great time to start over and try some new endeavors. After doing a few different things I came across photography when I began taking some night classes. At the same time I was travelling a lot and thought the classes could help me document my experiences for Instagram. Quickly I saw that my work looked identical to lots of other travel photographers. Not interested in that, I began experimenting with new ways of capturing my activities.

As I gravitated more towards documenting urban environments and architecture, photography’s role in my life became more dominant. The camera was the tool I used to make sense of the places I visited and my new home. The more I interpreted the structures around me the more in tune with the spaces I became. Additionally thanks to the rapid and positive response I had received online, I was driven to continue my photographic pursuits.

I am now even undertaking a Master of Fine Arts to help get a better understanding of my practice and what I can say with it in the future.

Your images exhibit the formalism and aesthetic rigor of graphic design – paying fastidious attention to color palette and shape, balance of visual weight; distilling complex scenes into their most basic, satisfying forms. Is this something you relate to? Who or what inspires you?

That’s very much something I can relate to. I feel that focusing on simplified compositions where the complexities of space have been eradicated is the most effective way to make apparent the overlooked aspects of cities. My hope is that by engaging with these elements I can develop a fresh perspective that enhances how people observe and make sense of the spaces they occupy. There are many photographers that are great at doing just that and inspire me immensely, such as Thomas Struth, Michael Wolf, and Gerry Johansson. Their work proves that no matter how heavily documented a place is there’s always an angle that hasn’t been discovered. 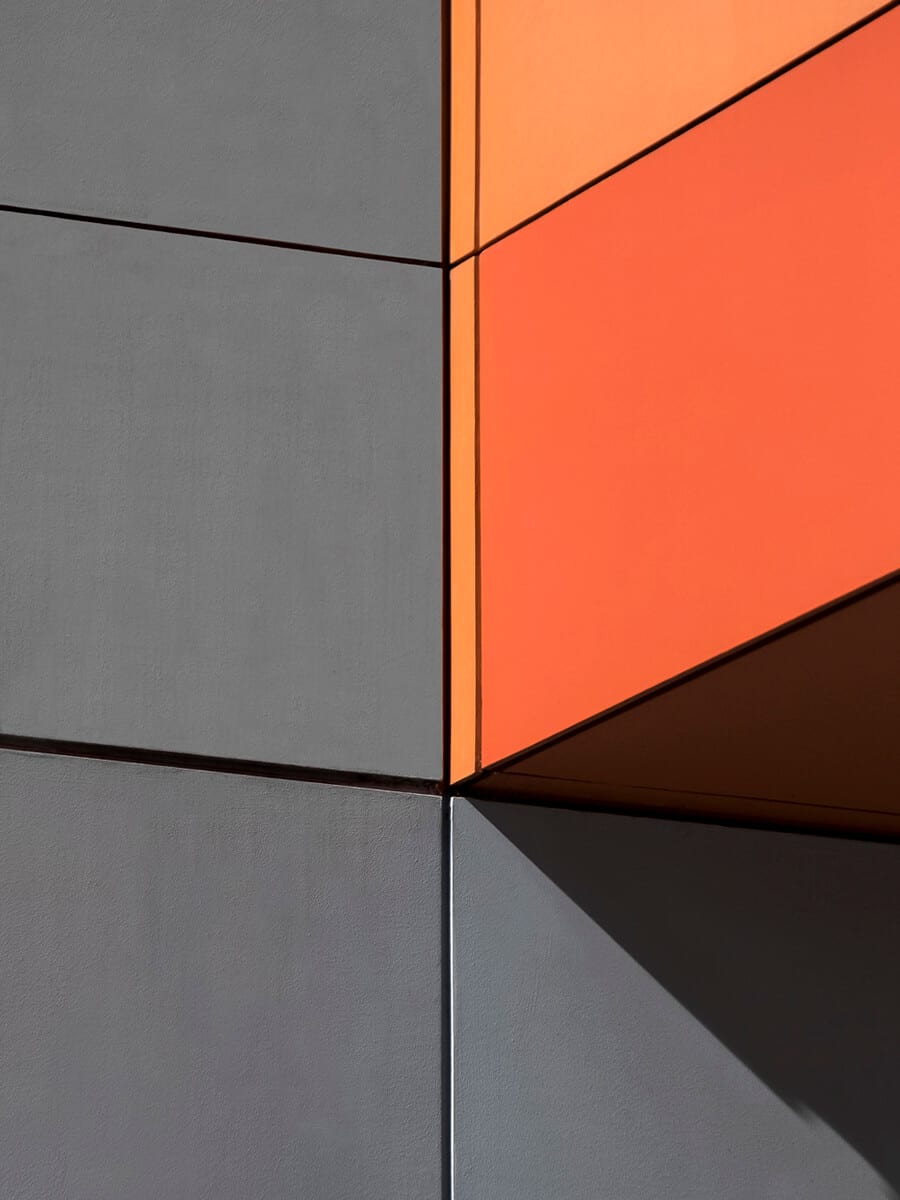 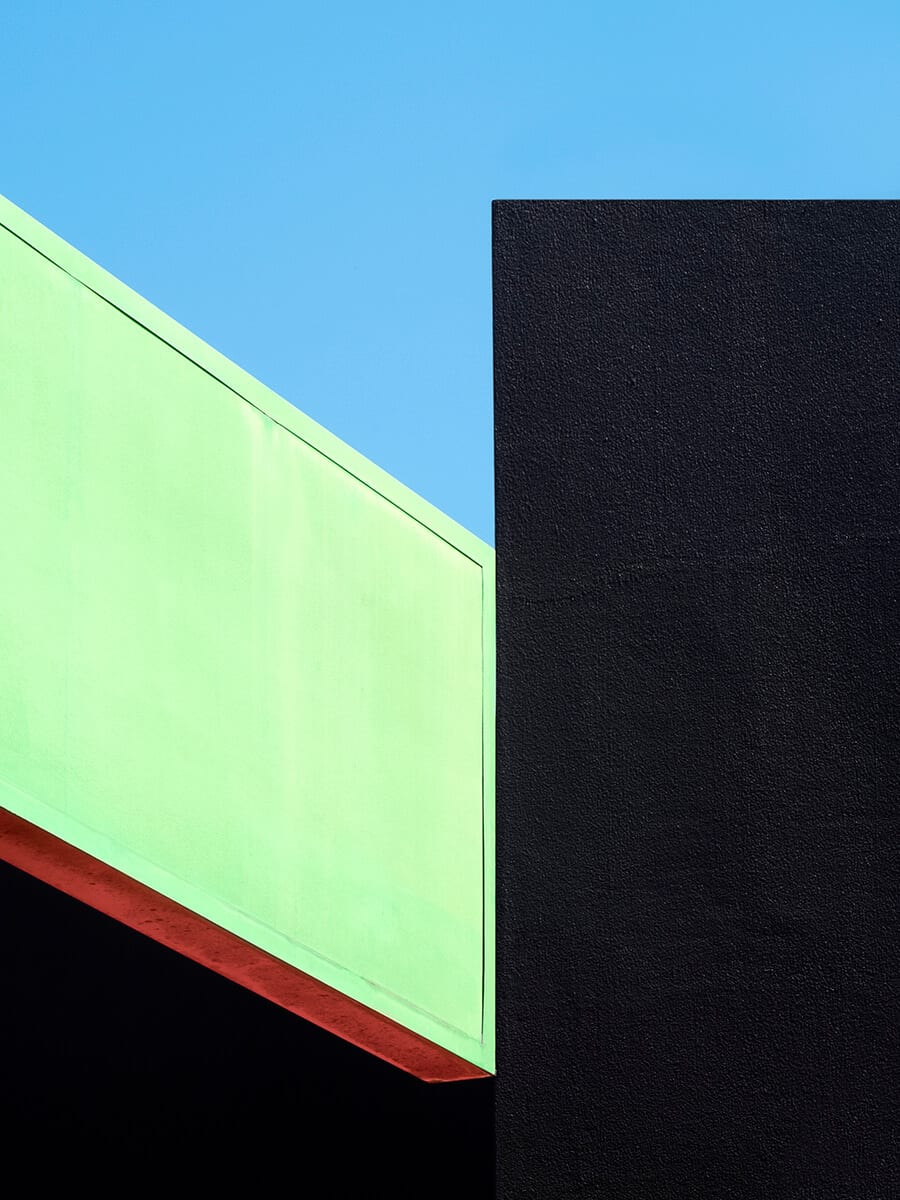 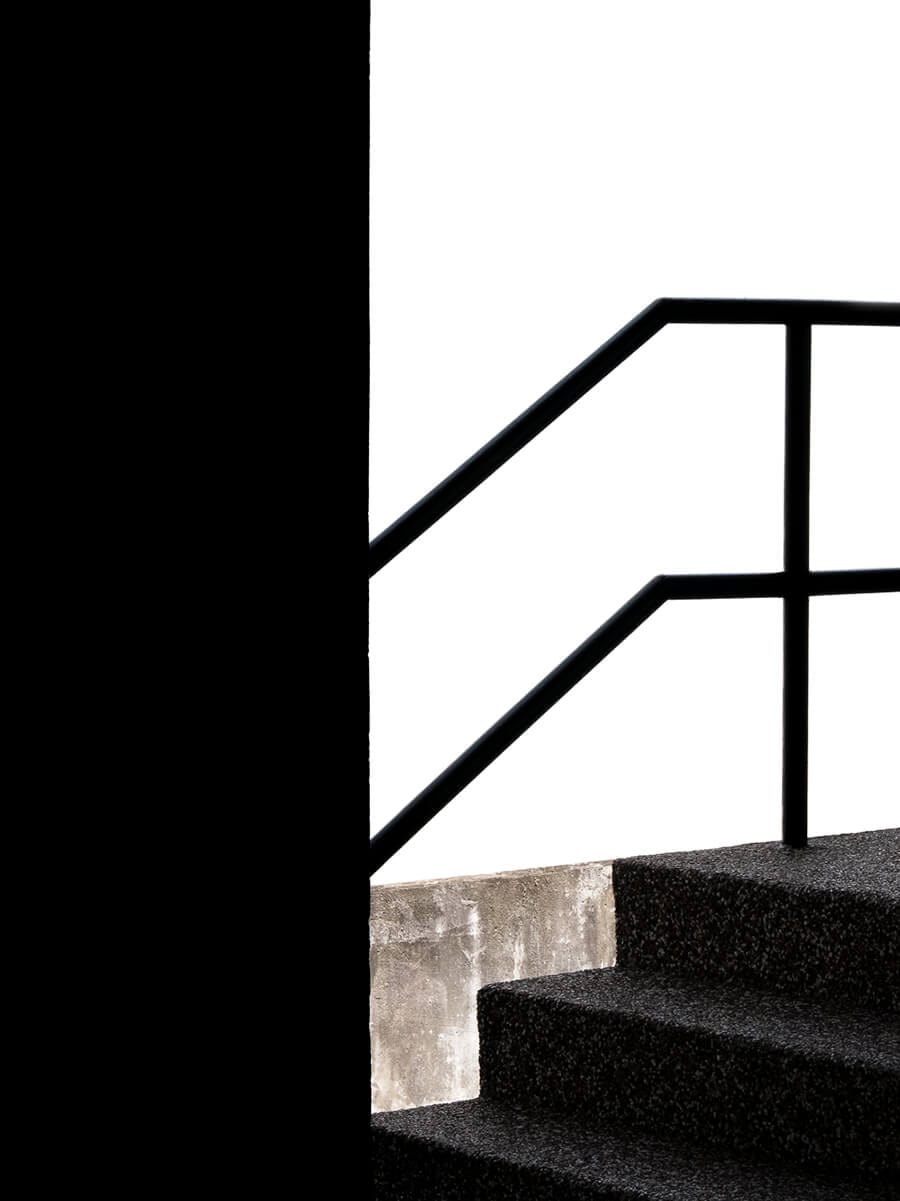 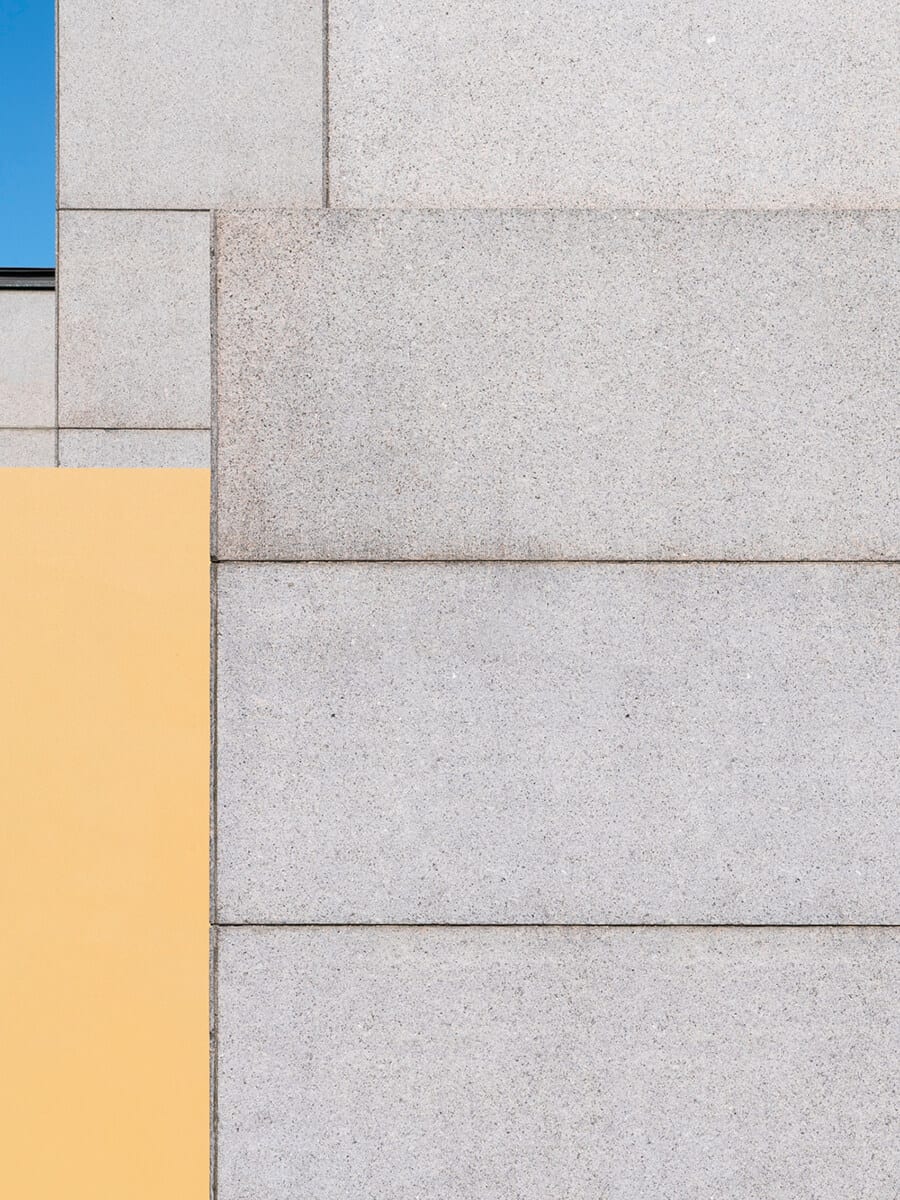 I’m reminded of a Trent Parke quote – “You shoot a lot of shit and you’re bound to come up with a few good ones.” It’s a humble and amusing way of expressing the challenge his type of candid street photographer faces, and yet yours is a different challenge… Shooting static scenes, would “You explore a hell of a lot and you’re bound to find somewhere inspiring” be an apt mantra? Talk us through your working process.

I believe that would be an apt mantra for me. My process of looking involves acting as a sort of modern day flaneur. I wander up and down streets for sometimes eight hours at time, with no set plan for the day, trying to become one with a space. Observing anywhere from corners, back alleys or even landmarks, my goal is to uncover the repeated details that are unique to a city’s identity – their colors, textures, materials and shapes. When I come across a scene that clicks for me I’ll use the viewfinder to mediate what elements I want to include and exclude, moving ever so slightly forward and back to precisely organize, layer and intersect them together. No matter how much I explore though, like Trente Parke I have to shoot lots of shit to hopefully end up with a few good ones. Some days I end up with loads of images and others I end up with nothing to show for myself. One of the biggest challenges my practice faces is the role that chance plays. For me it usually comes down to the weather that day and the amount of available light on a scene when I come across it. As time has gone on I’ve learned there are just some places and days that it’s better to observe without my camera.

With an abundance of architecture to be photographed, from countless angles, a lot of the art must be in the editing process, and your Instagram portfolio indeed comes across as meticulously edited. How much happens in the moment, and how much back at the computer/in the studio?

This may surprise some people but for the most part my images are made in the moment. With the core makeup of my frames being the composition and lighting, my goal is to get as much of that right in camera as possible. I would rather not crop in post as that hurts the file size and thus my printing options. Sometimes that is unavoidable, as it all depends on how far away the elements are or what lens I brought that day. Once the composition is complete, I push the contrast, highlights and shadows to make the colors pop. There are no filters used to help anything. Lastly in Photoshop I will always do some clone stamping to get rid of dirt spots and sharpen specific aspects up for printing.

Are there certain cities or certain architectural vernaculars that you think best suit your approach or that resonate visually with you? Or is your current approach a product of your environment? Are there places you’d love to shoot or conversely, placed you’ve tried but just couldn’t make it click?

There is no particular architecture that works for me better than others. As discussed previously I hunt for architectural details that to me are particular to that specific city. To get what I’m after I usually stay away from the city centers and focus on the suburban areas. The city centers (at least in Australia) are often uninspiring. Suburbs always seem very alive with a vibrancy that is asking to be captured. The aesthetic feel of my work has developed thanks in part to being in Sydney. The almost infinite blue-sky days and intensity of light really makes shooting minimal images a breeze. I think if I started photography in another city my images would have a completely different vibe. When traveling it’s hard to get the same light as Sydney, which made me have to learn to observe spaces without the camera sometimes. I enjoy shooting in Los Angeles as well since the light and suburban makeup has common traits with Sydney. One place I would like to shoot again is Tokyo as this was the first city I played around with documenting the urban environment. I would really like to see if the way I observe the city has changed.

Some cities that didn’t work were New York and Milan. I didn’t have much time in them and their density mixed with the amount of people on the streets made it hard for me to focus. I look forward to the challenge of trying them again one day. 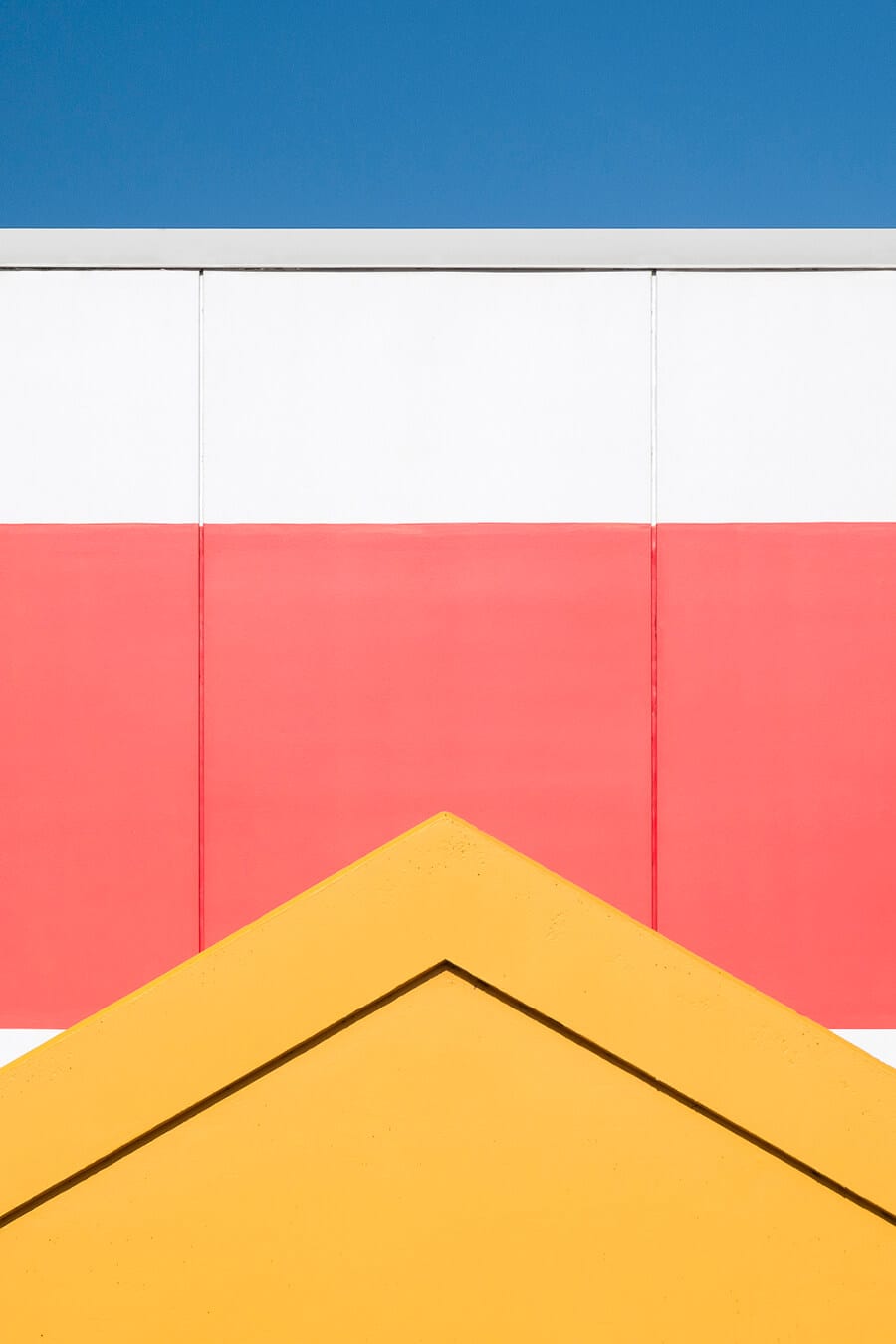 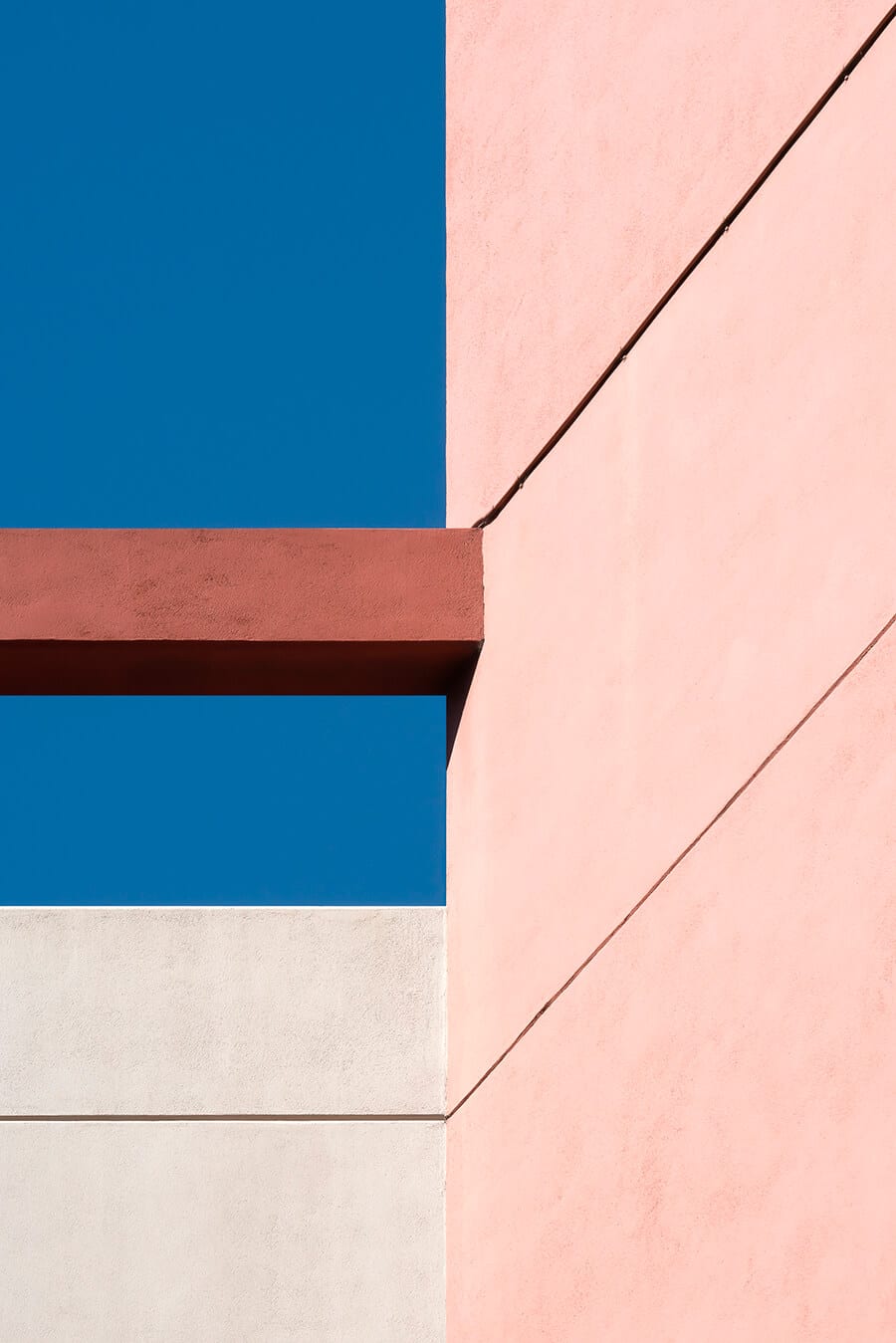 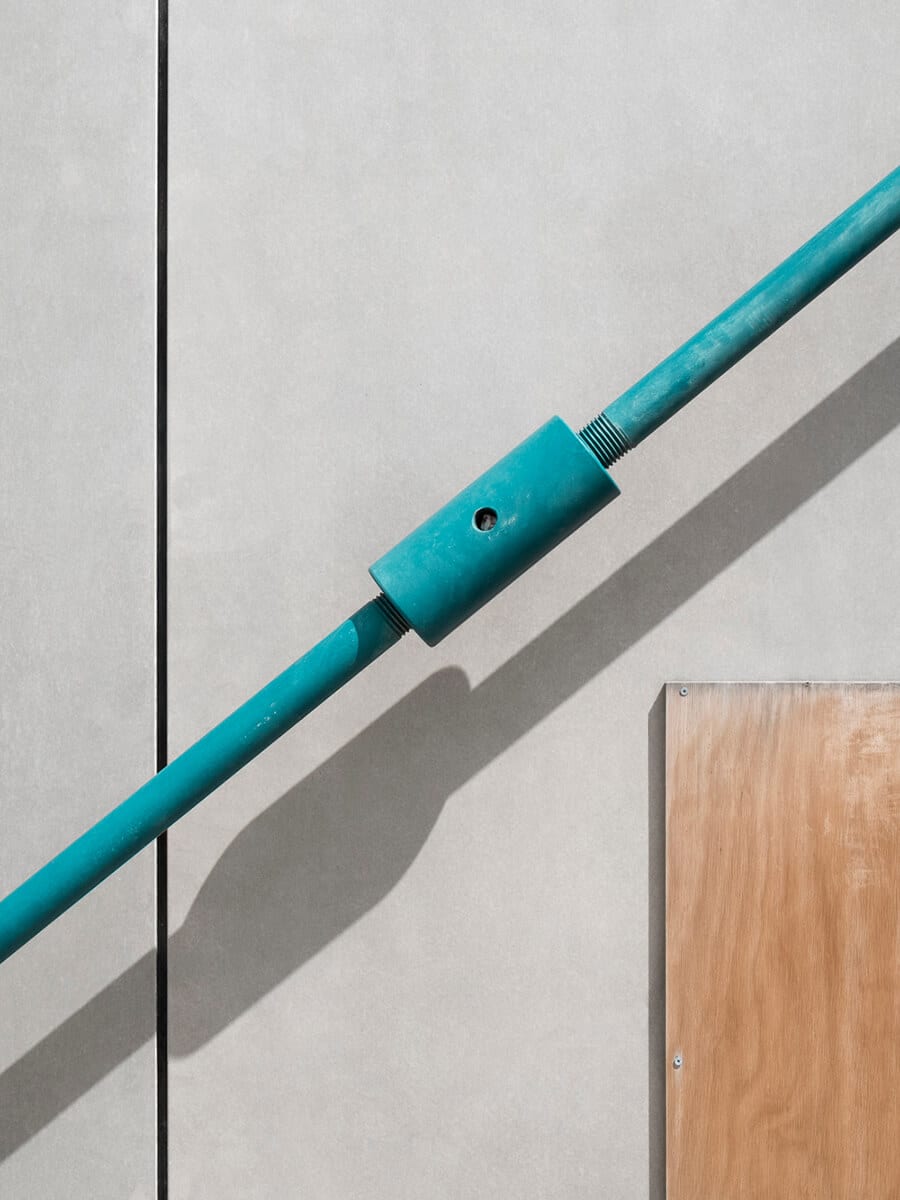 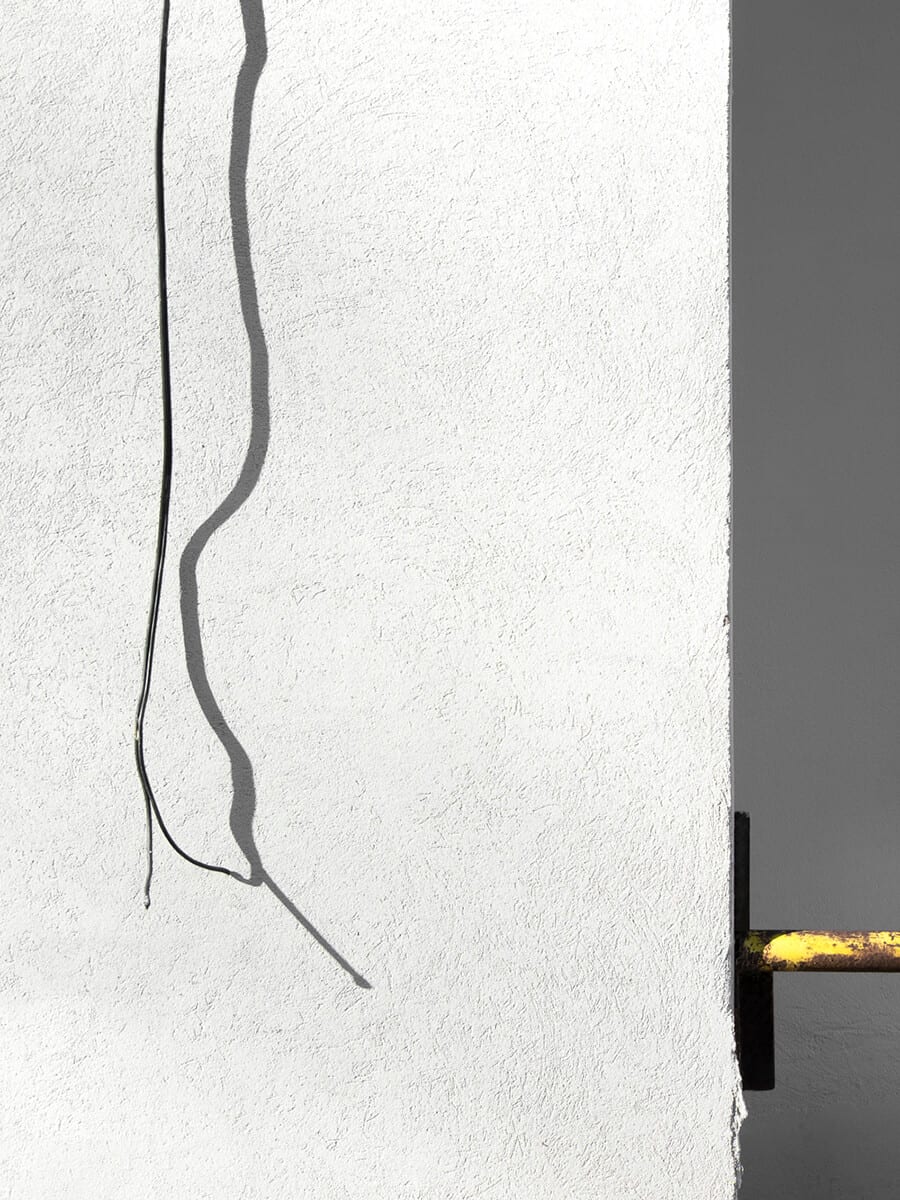 We recently interviewed Arielle Bobb-Willis about making ‘bodies of work’, and she pushed back, saying she thinks more in terms of ‘flow of work’. Where do you stand on this? Have you started to think about how you might group your work into thematic series, or is this something that doesn’t interest you?

I’m still debating my own view on this. And the part of me taking a masters course wants to flesh this out more. I came in to school with a flow and wanted to bring more structure to my practice. Being that my work focuses on urban spaces and is influenced by documentary photographers, I had always liked the idea of releasing thematic series based on specific cities. My mentors however like the idea of having my photographs stay in a flow for now. They want me to keep focused on strengthening the way I observe space instead of worrying about what exact space to document. They refer to my images as objective abstractions that belong to no location and should be left free of any constraints. Currently I will just keep shooting and see what forms by the end of the year.

You’ve amassed a pretty sizeable Instagram following. What’s your view on Instagram? Do you consider it just an outlet for your creative work, or does it play more of an active role in your photographic development?

Thanks for acknowledging my Instagram following. It was a lot of hard work to get that accomplished. My view of Instagram is that it’s a great outlet for all types of creative work, as well as a beneficial development tool for new artists. The exposure that comes from it, along with the community of like-minded artists you can surround yourself with is amazing. I found those aspects quite beneficial when trying to develop my practice. The app provided an instantaneous sounding board, which helped me analyze what was working and what wasn’t. Having that and setting a challenge for myself to post daily was crucial in helping me discover a focused path for my work. Now that my page has developed, I use Instagram as an outlet for my audience to see what I’m currently developing and promote what is happening with my work away from the app.

And finally, what are your next plans? Do you have particular projects on the go, or aspirations for the years ahead?

My next plans are to finish my Masters and come out of it with some sort of series. Aspirations for the future would be to keep documenting as many places as possible and develop my work into something that is truly like no one else’s. Thanks so much for asking me to do this interview – it was a pleasure! 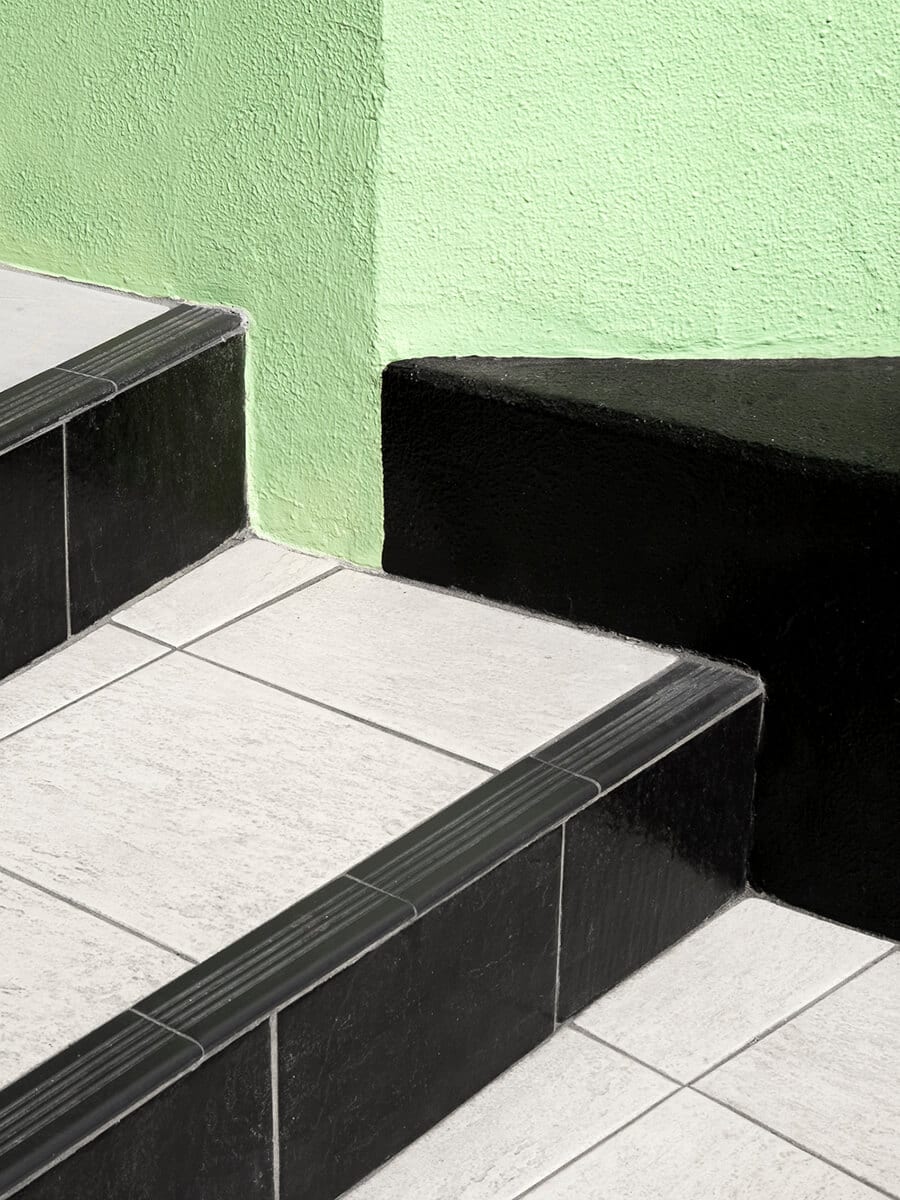 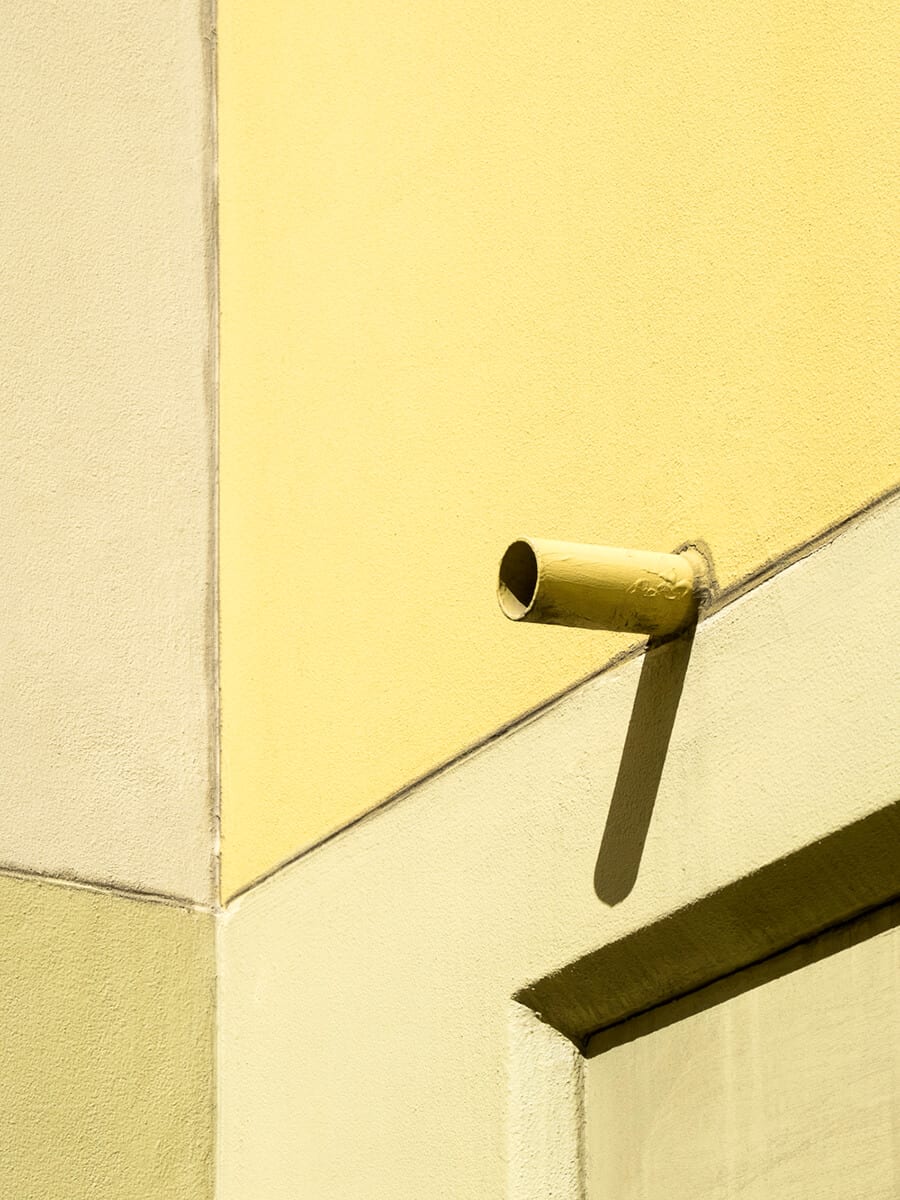 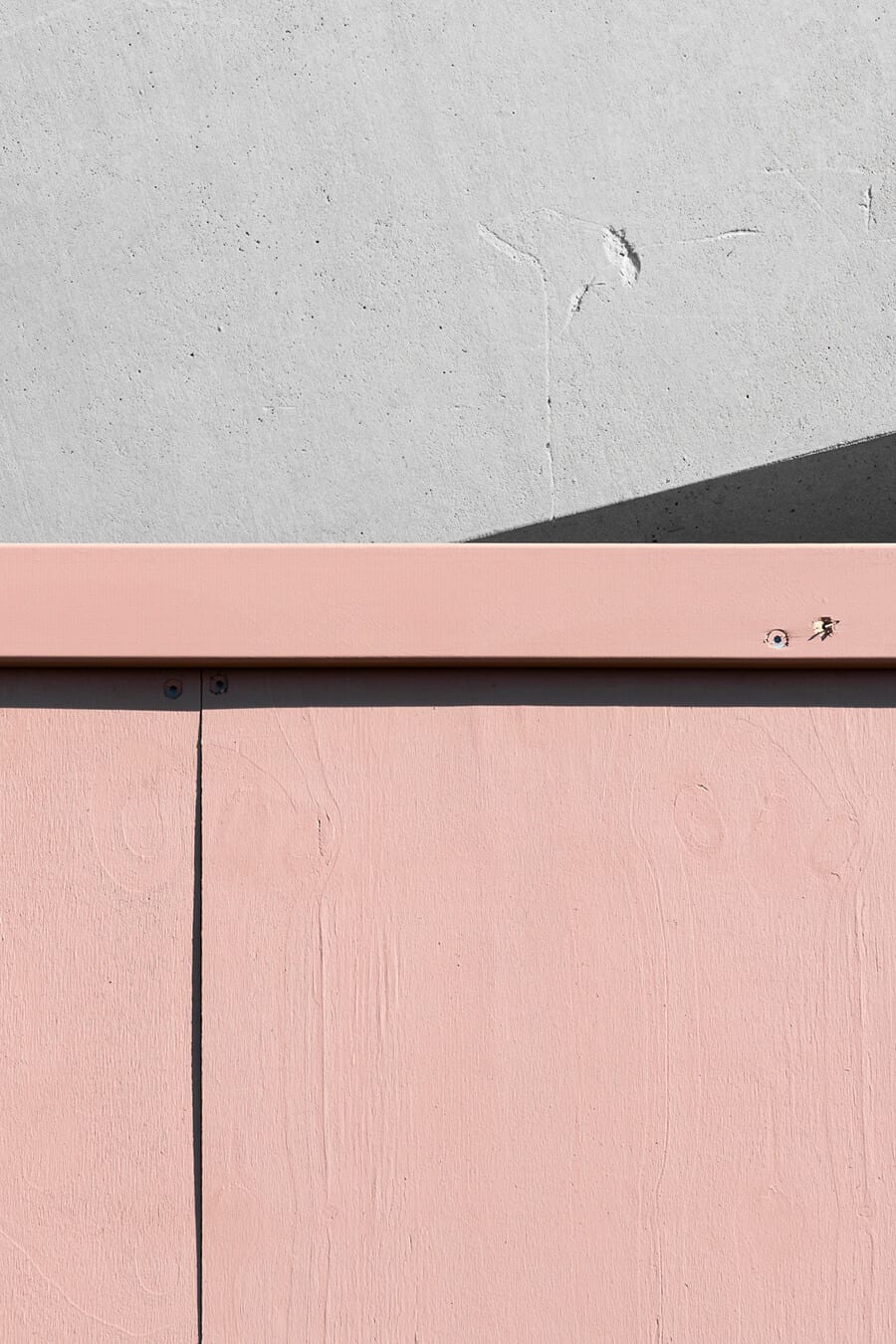 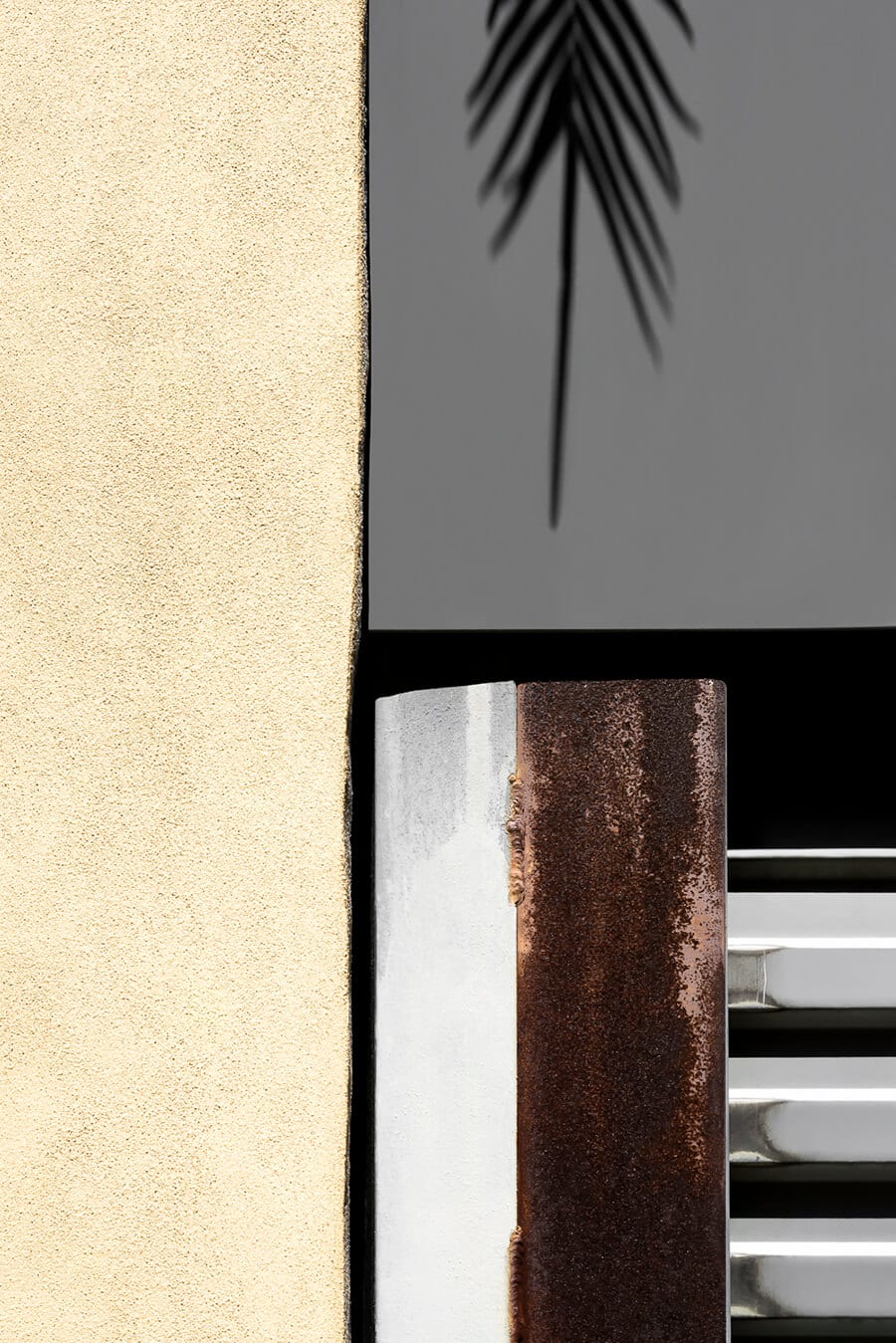