In the Mind’s Eye: Working in Large Format

My image ‘Explorers, Egmont Key, Florida’ was recently selected for Life Framer’s Youthhood theme judged by acclaimed commercial and fine art photographer David Stewart, having also won Juror’s Choice at the PhotoPlace Gallery ‘Man in the Landscape’ award. I was honored at the eloquence regarding the picture written in his juror’s statement:

“John’s image is eye-catching – there’s a strong composition, a gorgeous palette of colours, and the four boys, stood unnaturally ordered and regimented. As I see it, there’s almost a ‘Lord of the Flies’ feeling about it, something a little unsettling about the way they seem to rule this strange, dangerous environment. That juxtaposition of bright colours and darker ideas works very well. By getting the boys to stop and pose across the frame, rather than just spontaneously capturing them playing, John creates something arresting and interesting – more than just an attractive image.”

I firmly believe it isn’t a picture I could have made using a smaller format, and this article explains a little about why.

It all began with a location… 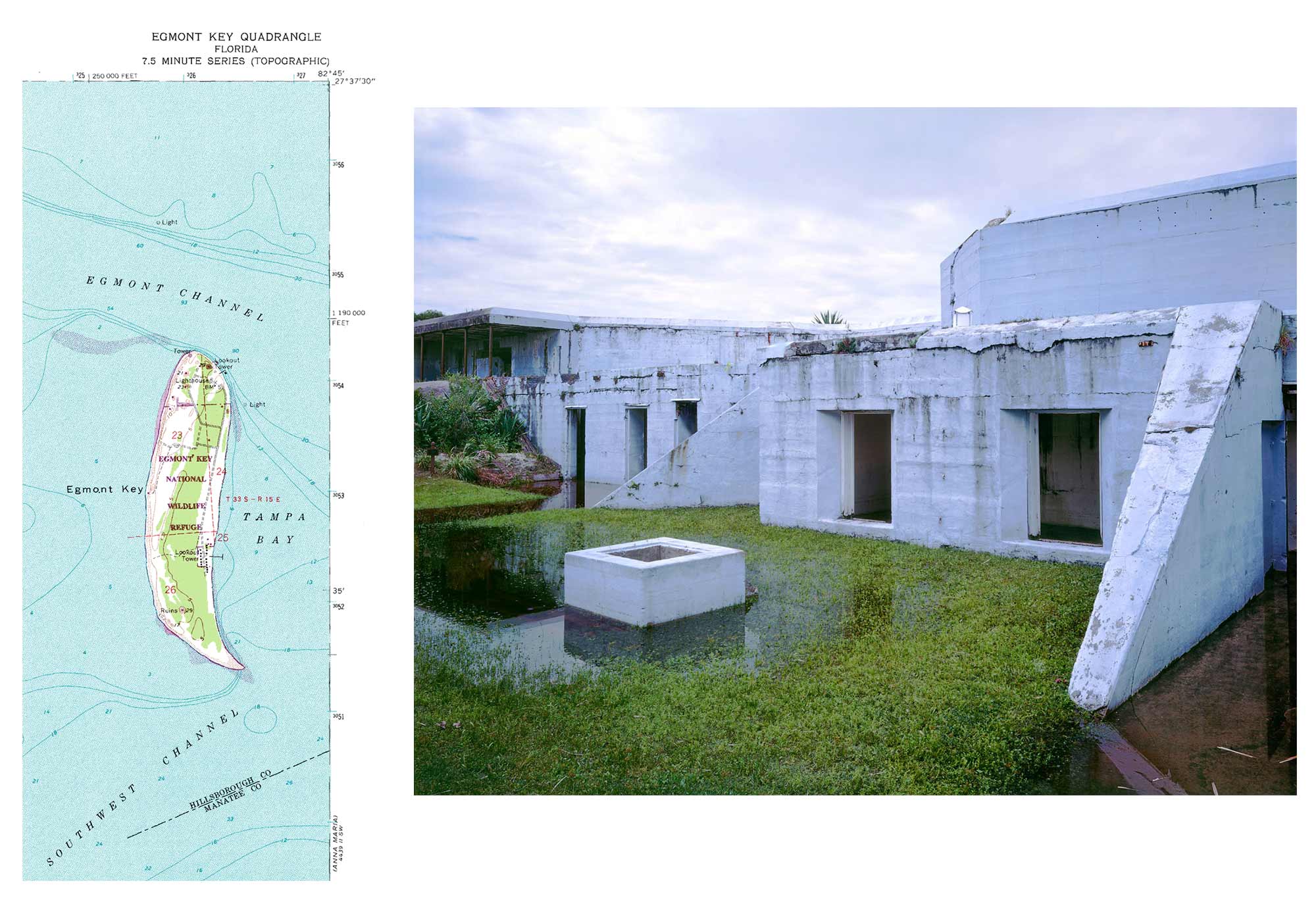 The historic Battery McIntosh, which once housed coastal artillery for the U.S. Navy is situated on Egmont Key, a small island off the coast of Florida. The structure seen in the picture was the first thing to strike my attention. The stripped down quality appealed to me in the same way many other ruins have, their archaic quality illustrating a past in which constructed objects are designed in such a way as to reveal curiosities of shape, and mystery. It’s a highly geometric structure, including not only rectangular entrance ways but a circular opening which, when placed next to the boys, softens the image. In my photographs I often depict structural subjects which have what I call a “hard edge”, usually very angular and defined by their shape. And certainly, this image without the boys would affect a harsher, colder, and more austere relationship, yet the inclusion of the children softens this edge, elevating the picture beyond the documentary and into the poetic realm.

My original intent was to photograph without the human element, since its design intrigued me and the flooded floor’s reflective detail seemed to be enough to carry the impact of the picture, but as I set up the 8×10” camera, I felt something was missing. So I waited. As I did so, several other people visited the location in front of my camera and as I observed them my discontent with my original rendering grew — this image needed a human element to complete it. I continued to leave my camera set up, ready to expose a sheet of film. All I needed was to find a subject not only willing to be in the picture, but one that would help reinforce the meaning which I was hoping to convey. A counterpoint to the harder architectural element.

The battery is connected with another fortification on the island with a long brick path which runs in a clear line for about 150 feet. It was down this line that I peered for the arrival of a subject to complete the scene. After about an hour waiting in the Florida sun, four boys arrived at the southern end of the fortification and were intrigued with the building. They started to climb inside, and were wary at first before stepping into the flooded ground, but soon fear gave way to curiosity and they walked through the tadpole-laden water with nonchalance. I saw in their excitement my own curiosity for this place. There was a certain empathy between myself and the subject here.

So the counterpoint, my subject, arrived in the form of four boys. There wasn’t much positioning required. They fell naturally into the scene, because it is a place where they were engaged, and in wonder. I exposed the scene on an 8×10” sheet of Kodak Ektachrome film, thanked the boys, and off they went, as quickly and spiritedly as they arrived”. 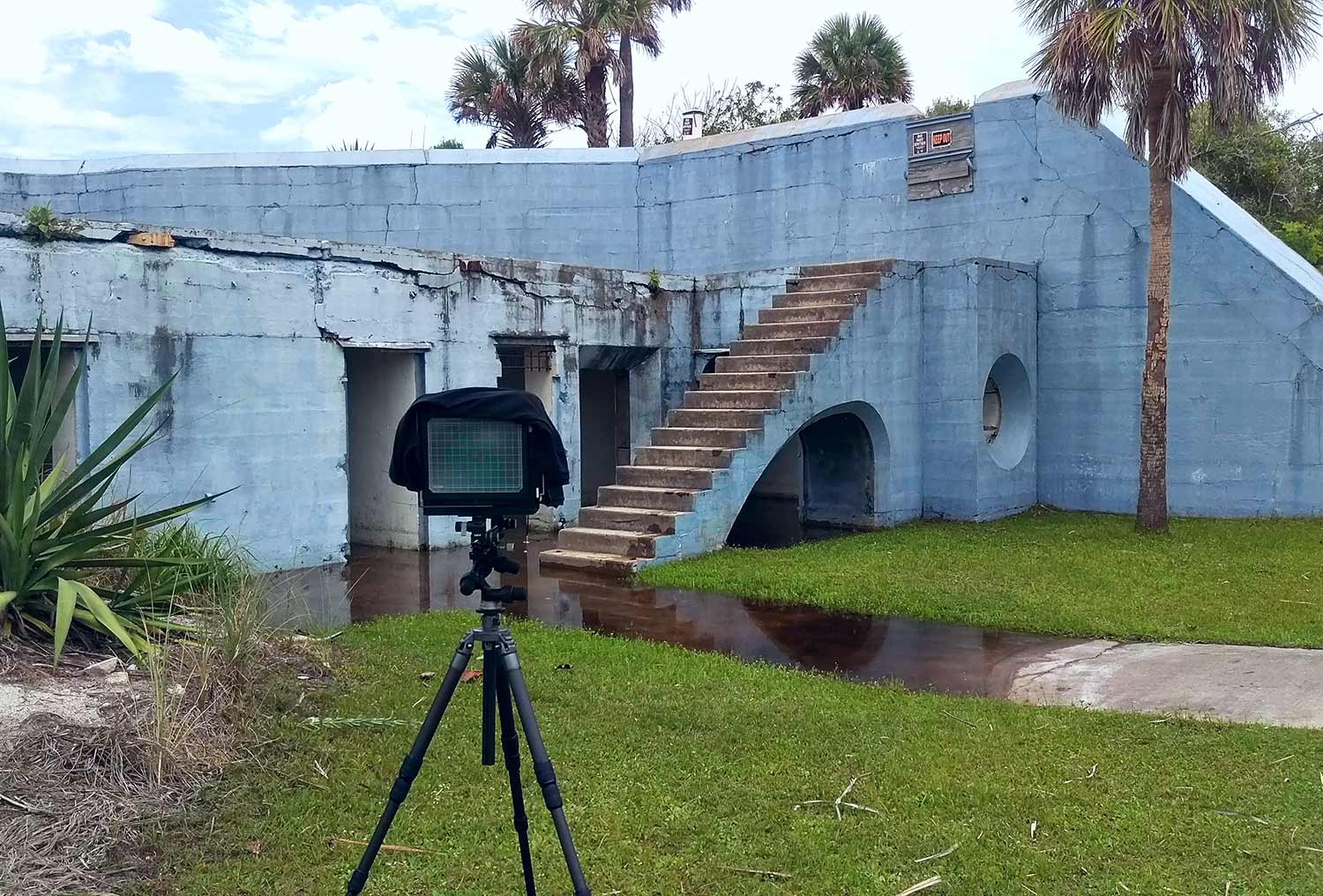 The above image shows the camera setup for the Explorers image – an Arca Swiss 8×10″ large format film camera. I made a claim at the beginning of this article that I would not have made this picture with a smaller format camera. While I’ve spent years photographing with large format and I can safely say I’m comfortable with their operation (plus increased weight and bulk) I will briefly explain why I th