The Spectacle of the Street

An interview with Bas Losekoot

“This project is about feelings and emotions we all recognize while navigating the city. We like to be a part of a group, and yet, be individual. I believe that in my images you will find people that are “alone together”.”

Dutch photographer Bas Losekoot won our recent competition URBAN LIFE with a stunning freeze-frame street moment, having previously won our competition An Instant back in 2016. The image struck us, both for its arresting subject matter, and for its sublime technical execution, exhibiting a sharpness, or a ‘hyper-reality’ as Bas would put it, unusual for a street image.

Looking through the series from which that image was taken, Out of Place, each frame tells a story of the urban world that now half of the world inhabits – how it confines us, and we retract into our inner-selves in public. How the busiest places can be the loneliest. Bas accentuates these feelings with his considered compositions, where negative space heightens the feelings of isolation and introspection, and where looming shadows are often more prominent than the people. With the recent global pandemic, they are all the more powerful and relevant.

We sat down with Bas to ask him about his ideas behind Out of Place, and his techniques for capturing them. His answers are insightful and thought-provoking.

Hi Bas. Firstly, congratulations on winning our Urban Life competition– winning Life Framer for a second time, five years on from your first win, and with an image from your same mega-project “Out of Place”. Can you tell us a little more about the image and the series it comes from?

In 2011, I started a project towards the beginning of the Urban Millennium; the historic turning point where for the first time more people lived in cities than in rural areas. For me this fact was the starting point for thinking about how this growing population density is influencing the inhabitants of the world’s megacities.

At the moment, we are facing the biggest wave of urbanization in human history. In this project, I try to imagine the consequences for everyday city-life in the future. I consider the city to be the centre of globalised society and with this project, I research how this reflects on its residents. What happens when too many people live on a small surface? How do people react to each other in areas of overpopulation? To me street life is a continuous stream of split-second meetings.

This specific image is shot in Lagos, Nigeria. This city forced me really to re-think my methods. You cannot go out and just shoot wherever you like, so I had to get creative in finding interesting locations to work. Sometimes unexpected elements can get juxtaposed in an extraordinary setting. Lagos Island is a very overwhelming and I fell in love with its energy and chaos immediately.

It is definitely the most difficult city I have ever worked in, yet at the same time, the most interesting. This particular photograph was made at a traffic junction close to the suburb of Ojuelegba. I was drawn to this flyover as the ceiling was completely covered with ashes because of a parked auto bus that was burnt down. I was waiting for a long time for things to happen, and suddenly those two guys walked into the frame. I remember, when I just made the shot, I was not so happy with it, because they were a bit out of focus. Later on, I realised these fast approaching blurred strangers really represent the alienation you can feel in a densely populated megacity. 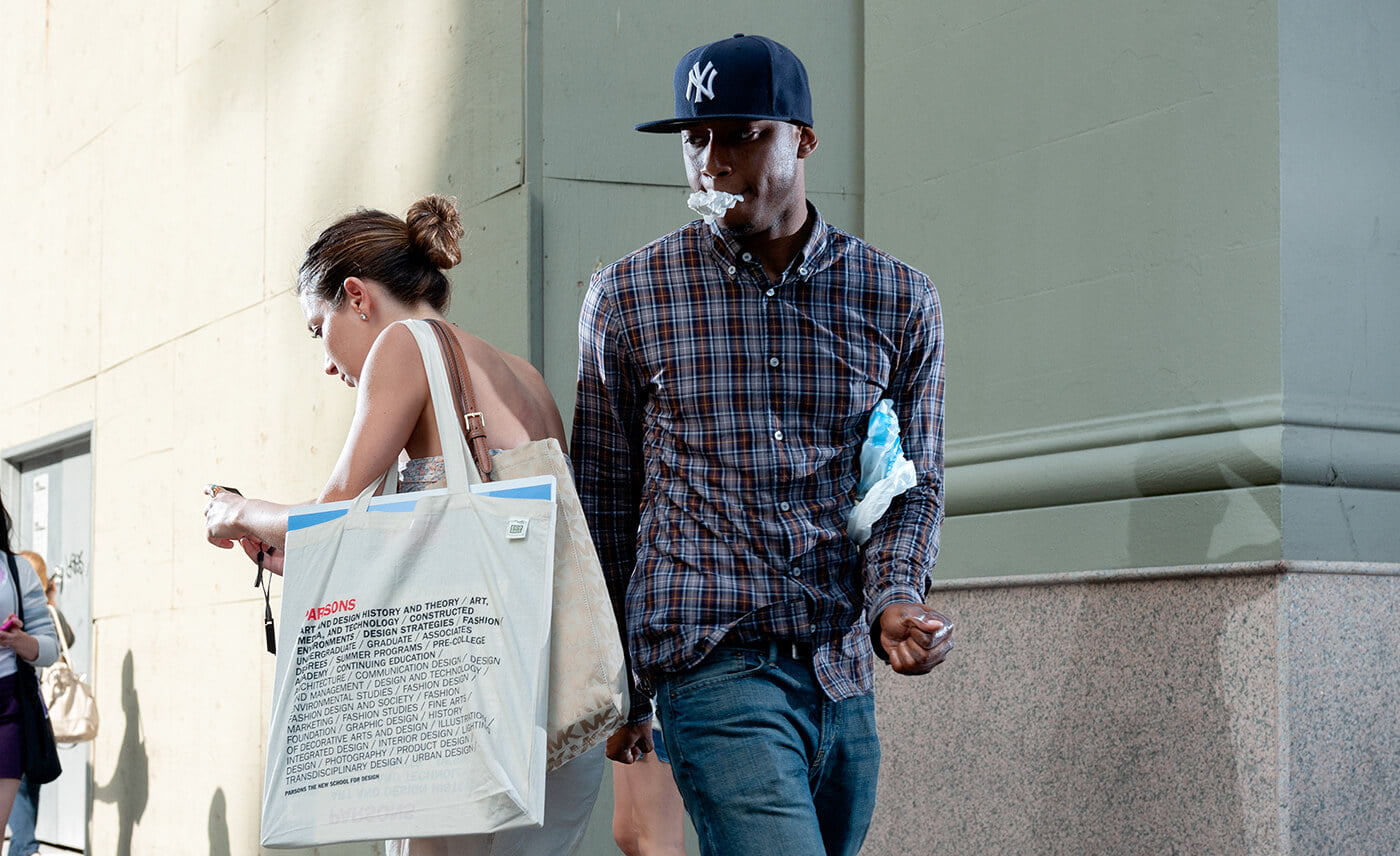 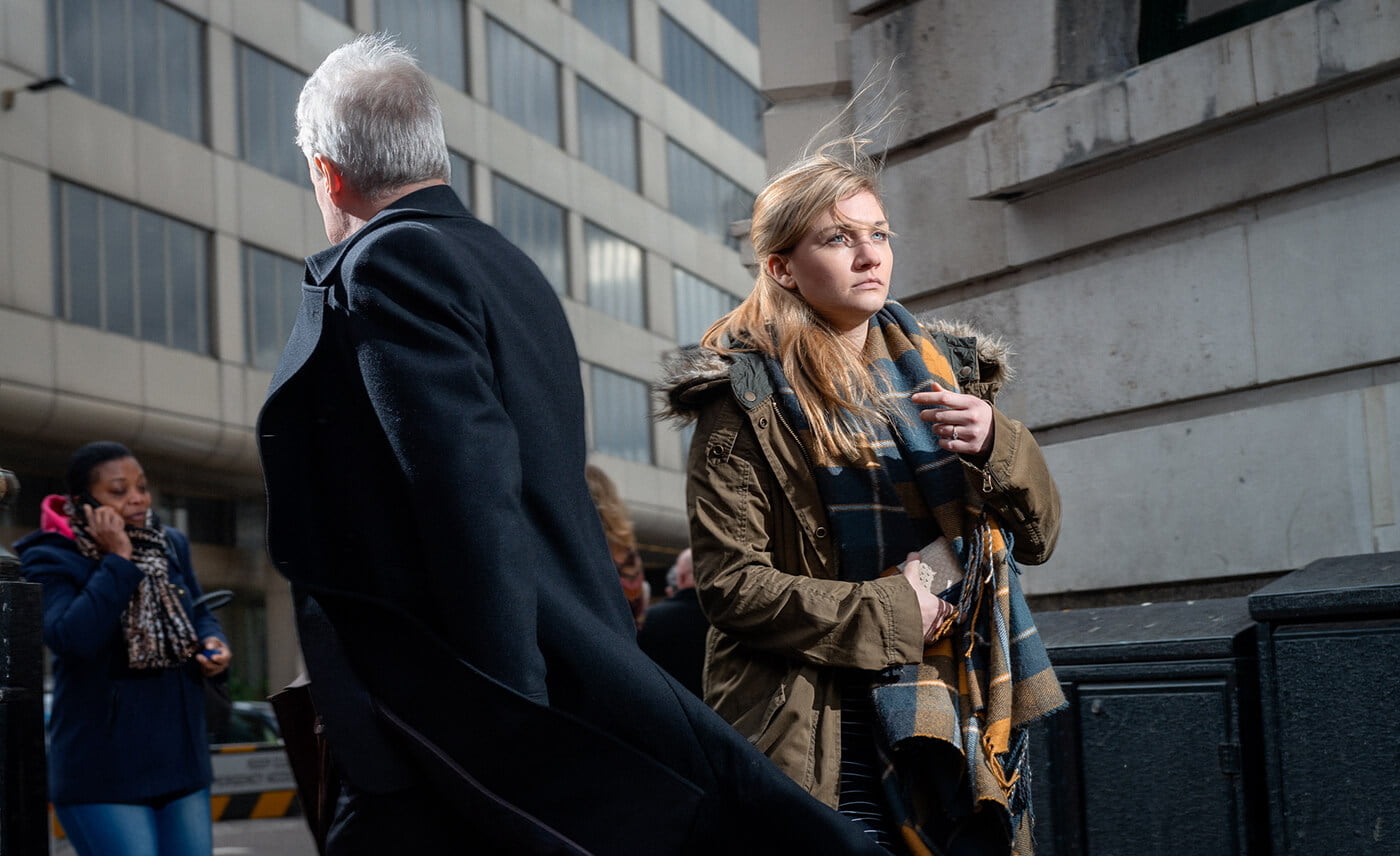 Our judge, Martin Roemers, described it like a “still from a movie”. Each one is beautifully lit and composed, there’s an immaculate crispness to them that’s rare in candid street photography – they almost feel staged. Can you talk us through your process – what exactly you’re looking for in each of your images, and how you go about capturing them?

As a photographer, I am trained in a classical photo studio. Later on, I got interested in the moving image, and graduated Art school with a mixed-media installation. Later, I studied cinematography at the Dutch Film academy, while I was working as a projectionist in an old cinema in Amsterdam, where I got fascinated with the single film-frame.

On assignment, I worked for many years as a stills-photographer on film sets, where the day consists of a lot of waiting. Therefore, I had the chance to study the decoupage, mise-en-scène and especially: cinematic light. With many gaffers on set, we discussed what might be the “believability of light”.

For more than a decade, I have been interested in cities and got attracted to the images of artists that worked in the public domain. For this project, I decided to take the lights out of the photo studio, starting to imagine the street as one big studio.

Inspired by the double-light situations, created by specular windows from skyscrapers of the financial district in Manhattan; I wanted to create that uncanny reality myself. I started to use flashlights to photograph everyday street-scenes. By creating a mix, between daylight and artificial light, I was able to darken the environment and isolate certain people. First, I tried working with big lights with softboxes and generators with assistants, until I realised that wasn’t working very well. In order to work alone, I chose small compatible speedlights that I attached to traffic lights, trees and whatever I could find.

I began to imagine city dwellers as actors. By approaching the street as a stage, it made me wonder if we might perform our lives. I started to read into performativity theory, for example by the sociologist Erving Goffman – about the presentation of self in everyday life. It seems, we are performing social roles and we wear the appropriate mask for that. While commuting the city, we drop this mask and replace it for another one, the mask of ‘self-protection’. I am interested in this mask, because I believe it provides us a lot of information of the self and the construction of identity.

I use flashlights because it empowers the capacity of photography to really freeze movement. Photography already has the ability to arrest motion, through fast shutter speeds, and the flashlights really emphasize that. Through this technology, like in the stop-motion photography of Edweard Muybridge, I am able to capture something that remains unseen at the normal speed of life. Like film stills, they are a figment of a bigger picture; an extended moment out of an urban continuum. The images suggest off-screen events since they are more about what is outside than inside the frame. They make you wander what just happened or is going to happen next. They are frozen moments that feel unreal – or ‘hyper-real’ as I like to consider them. I intend to slow people down and make them dwell on the meaning of inhabiting the new reality of fast-growing cities.