Comfortable with Being Uncomfortable

An interview with Arielle Bobb-Willis

Arielle Bobb-Willis won our ‘COLORS’ theme with a bold and inventive portrait of two bodies in colorful contortion. Our judge Lorenzo Vitturi selected it “for the inclusion and careful combination of colors in a scene in which the human subjects merge harmoniously with the urban context” and our editor praised it for finding “strength and creativity in the mundane, a celebration of making do with what you have and finding a new-found joy and vitality in it”. We sat down with her to talk about her creative practice – how she forms and develops ideas, how she prepares for shoots, and how her family influence her polychromatic, imaginative style.

Hi Arielle. Congratulations on winning our theme ‘COLORS’. Do the judges’ comments resonate with you?

Thank you so much for this recognition! I am honored to have won. When I read the comments they definitely resonated with my journey to photography. I love seeing how my photos make people feel. From location, to subject, to props and clothing I work around the idea of creating art with composition and color in mind. But more importantly I’m looking into my experiences as the foundation for all of the photos. I think at a first glance they come off as very happy and fun which they are, but I feel the somewhat awkward, uncomfortable undertones are definitely pulled from the mundane, grey, and uneasy moments in my life. It’s a mixture of having those feelings in the past and now pushing to accept this light playfulness in my life. I’ve worked hard to get to know who I am and be able see myself in my work so I really appreciate your take on it!

Your use of photography as a medicine for depression is well-documented in your interviews, and I’m drawn to how you use the medium to perhaps escape the confines of reality – creating a more positive world. Is that a fair reflection?

Yes definitely. I think all of us are trying to find the thing that keep our minds present, relaxed, and at peace. I moved to a small town in South Carolina in 2008 from NYC and that transition definitely felt out of control for me. I didn’t feel connected to my surroundings and I didn’t have any way of leaving them. When I first started taking pictures I decided to turn to photography to create a world that I would like to live in…or just to make my reality look better than it was. I think my photography has definitely grown with me in the sense that I’m learning more and more why I need it in my life. There’s so much to explore and break down while creating photos so I’m just excited to see in what direction my work will go. 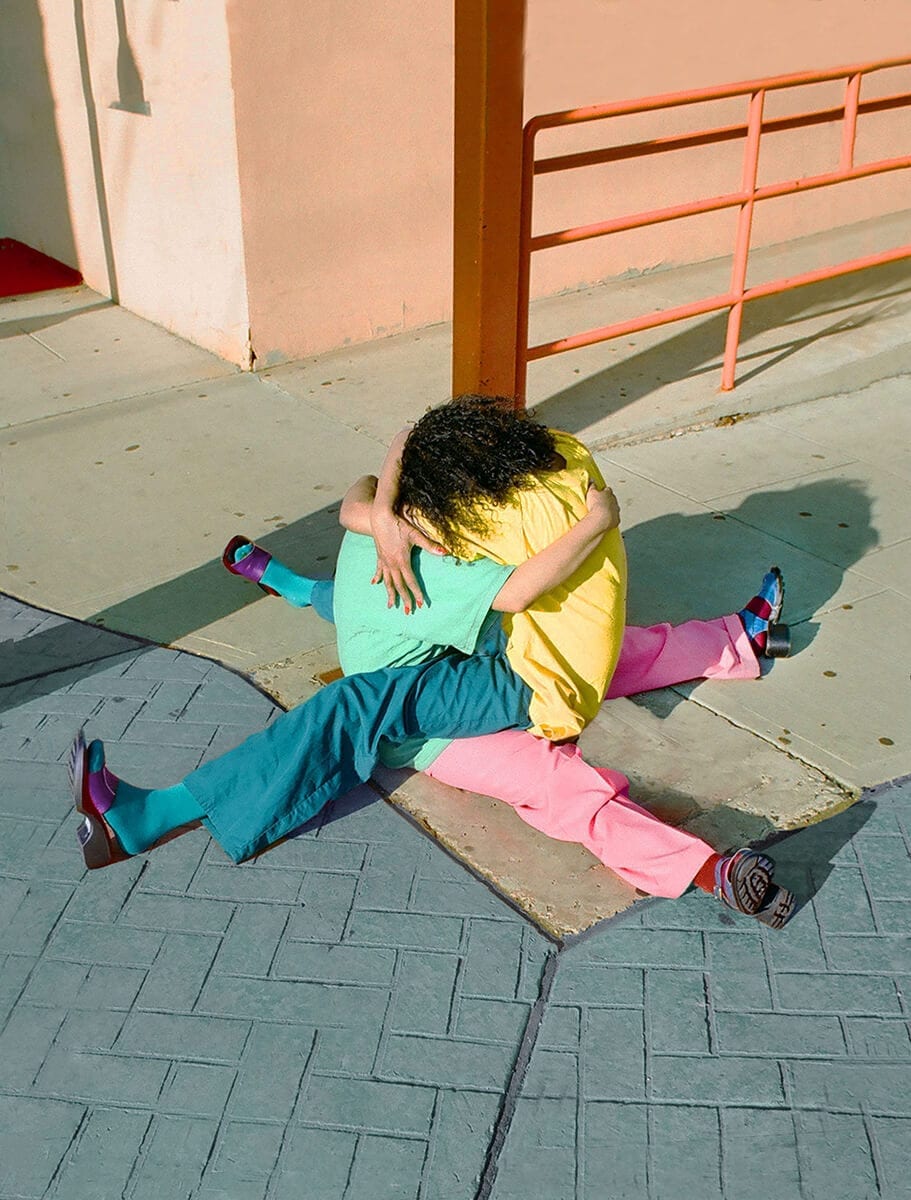 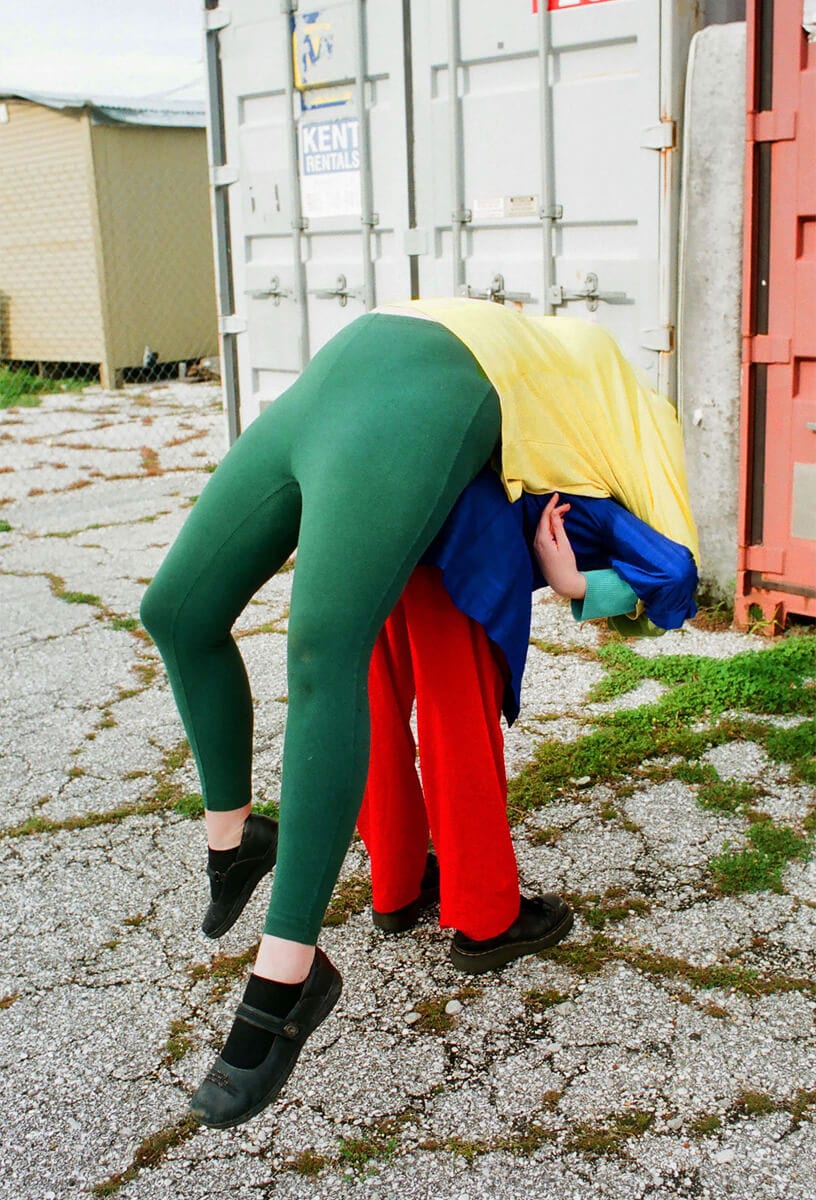 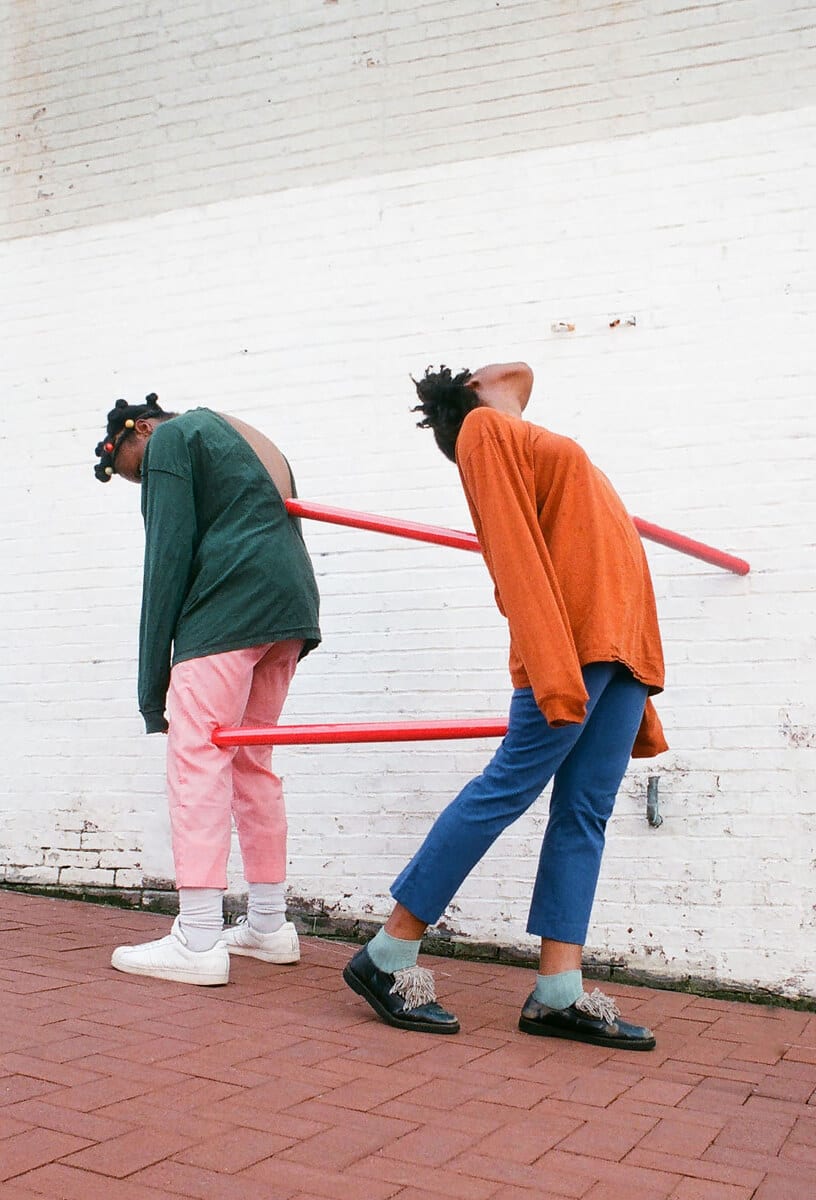 How do you prepare for a typical shoot? And in terms of the elements at play – the clothing combinations, the locations, and of course the poses – how much is planned in advance versus improvised in-situ? There seems to be a wonderful spontaneity to each image, but I’m aware that brilliance doesn’t always happen by accident…

Thank you! Well my preparation process is somewhat different every time. Sometimes I’ll see a location that I want to shoot in and I’ll build around that. I also roam around 99 cent and thrift stores and just get lost in all of the random things they usually have. That’s where I feel a good amount of my ideas come from. I feel super focused when I’m there it’s a great way to be internal and take the time to just focus on what’s in front of me. I also sketch! They aren’t amazing but they basically serve as bullet points when I’m shooting. If I have a ton of ideas come to me at once it’s just a great way to organize it all so that on the shoot I don’t forget any of them. I would say I do plan out my shoots based on location, props, and poses but they never turn out exactly how I planned. I’ll try a pose and the subject will move a certain way away from the original position that makes the photo come together. So it’s 50/50 I would say.

Many of your images, such as your Life Framer-winning one, exist in an urban context, but you’ve also shot in rural environments. Are these purely aesthetic decisions, or is there another rationale? And are there any specific places you would love to shoot at?

Growing up, my Mom lived outside of the NYC and my Dad lived in the city so I would say that had an impact on how I see the world. I love the quietness of smaller rural towns but I also need the roaring energy of a big city. It’s just how I was raised so I always found beauty in both. I live in a big city now but I always go back to New Orleans as much as I can. Just to have that sense of peace and ease. New York is my head and New Orleans is definitely my heart. I need both! There are tons of places I’d love to shoot! Monowi in Nebraska, Natchitoches in Louisiana, Dongchuan Red Lands in China, Tokyo, Cumbria in England, Seoul, Rio de Janeiro, Cape Town, Johannesburg, Mykonos, and many, many more!

Is there one specific image your most proud of? And you consider each image as a single, or have you started to think in terms of bodies of work?

It’s very hard to choose just one that I’m very proud of! I think I’m attached to certain pictures of mine at different times based on how I feel about myself. I think I look at each as a single. When I do collaborations and projects for other people or magazines that’s when I see them as a body of work. But otherwise it’s more of a flow of work….a body of work sounds too stagnant to me. I look at each photo and remember that exact time in my life, so it’ll be extremely interesting to see these in the future.

But I am extremely proud of the first one I ever produced [below]. It’s of two girls bending backwards towards each other. I was going through a very rough time and decided to use all of that and put it somewhere. So I’m proud of the perseverance and how brave I felt. That’s usually how it goes…I feel very anxious before most of my shoots and it’s just because I care a lot about my work…whatever I might be shooting I’m definitely learning that on the other side of fear is where the gold is…trusting myself more and more. 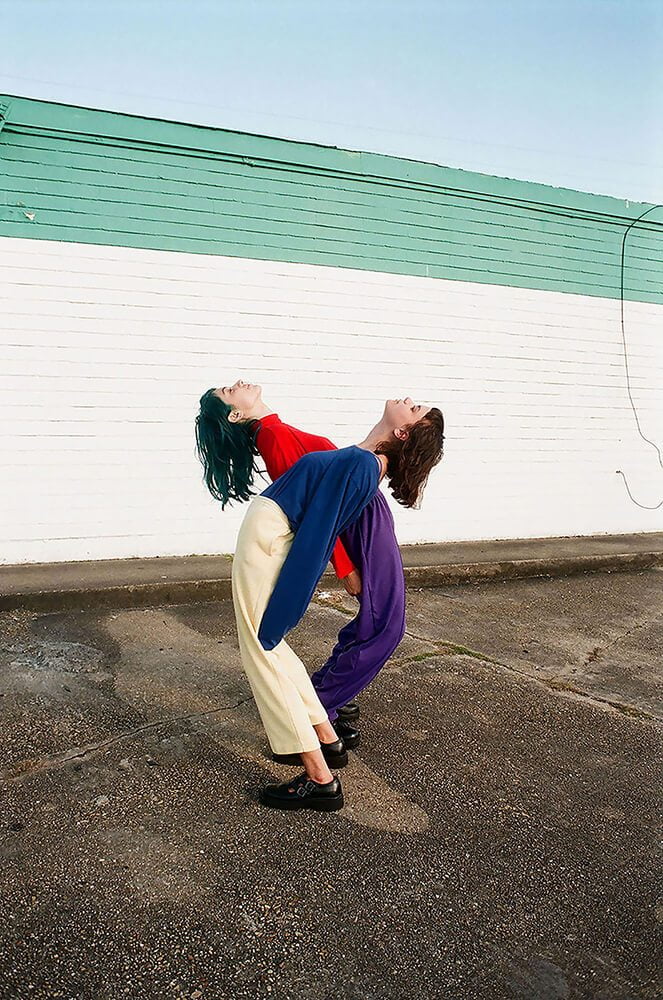 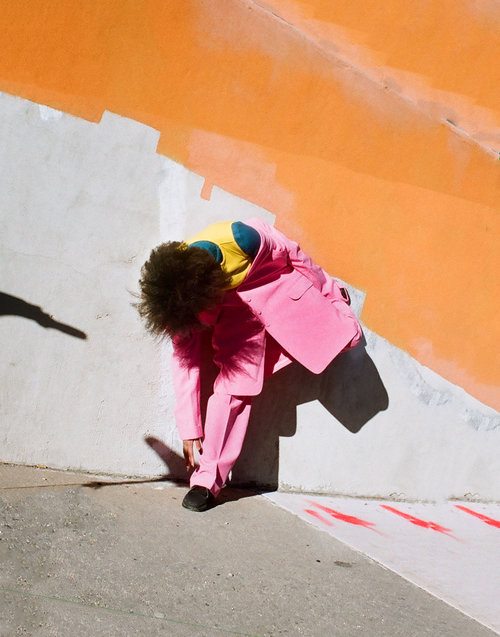 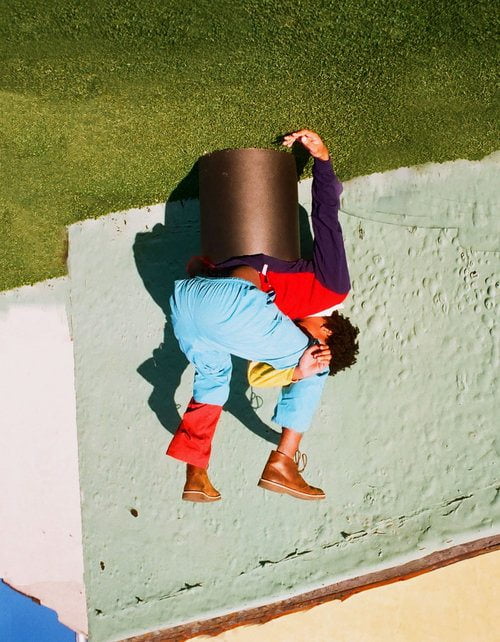 Your models’ faces are almost always hidden. What’s the reason behind that?

With my work I enjoy taking people and putting them into a situation that’s foreign to them or not a part of their everyday. So I start there and I think it allows for the subject to let go and understand a little more about themselves. A lot of people when they see the outcome can’t believe that it’s them! I want people to be comfortable with being uncomfortable and doing new things. I also think it has to do with the fact that I’m definitely not one to want to be the center of attention. It’s nice to let the subjects become a part of the entire composition rather than their face be the main focus. It feels egoless and refreshing to me. Especially with social media nowadays!

You’ve described your Dad’s love of contemporary art as a huge influence, but also the cartoons and characters that your younger siblings enjoy, and I see that combination in your images – high-art meets childlike playfulness, something of Matisse’s cut-outs perhaps. Do involve your Dad and siblings in the creative process at all? What do they make of your work?

I was obsessed with Matisse in college! My little siblings have been in my work before. They were actually my first subjects when I started taking pictures. I value their opinions just because they have no filter really. My little sister Dakota lets me have her notebooks that she draws in. I keep them with me all the time and use them as journals when she doesn’t color on all the pages. They definitely have influenced me heavily…they help me put my life into perspective…with just how innocent and light-hearted they are. My Dad and family definitely influence my pictures just by being themselves. They aren’t telling me what to take pictures of but my family’s acceptance of my work has definitely helped. It’s nice knowing I have people on my team I can trust wholeheartedly.

You shoot exclusively with film, and I read that you recently got hold of a medium-format camera. What makes you love film photography so much? With the almost limitless possibilities of props and poses in your work, is it the restraint it imposes?

My Mom gave me my first camera which was a Nikon D3000. I was eager to shoot so it was with me 24/7! My history teacher saw how much I loved photography and he gave me my first film camera which was a Nikon N80. That first roll that I shot was that “ah-ha” moment where I fell in love with the whole process. I feel I benefit from the anxiety of waiting to pick it up, sometimes forgetting what you shot, and the restraint of each roll. Knowing I have 6 rolls for this one shoot makes each shot more valuable to me. Digital is okay but it’s not as exciting to me. When I first started shooting the world seemed pretty grey so when I shot that first roll in my room, where I spent a lot of my time, it turned it into something better…brighter. I think my digital camera just got exactly what was there. But my film camera put this orangey-red grainy hue over all of the photos which was an extremely freeing feeling to me….especially during that time where I felt I had no control over my surroundings.

Finally, you seem pretty prolific and your art seems to have come such a long way in a small amount of time. Do you have specific ambitions, or ideas for the direction your work might go in? What does 2018 hold?

Thank you so much! I have been shooting more and more fashion editorials lately which is really exciting – to have a team and to learn how to work as group towards a specific goal. I’ve always done everything solo so it’s really interesting to collaborate with talented creatives. I’m also starting to get into video which I have so many ideas for. I want to travel more with my work as well! I’ve shot in San Francisco, Chicago, New Orleans and NYC so I’m trying to keep adding states and locations. We’ll see where this all takes me! I fall in love with photography over and over again so I’m just really excited to keep shooting as much as I can and possibly open someone’s eyes to something new. 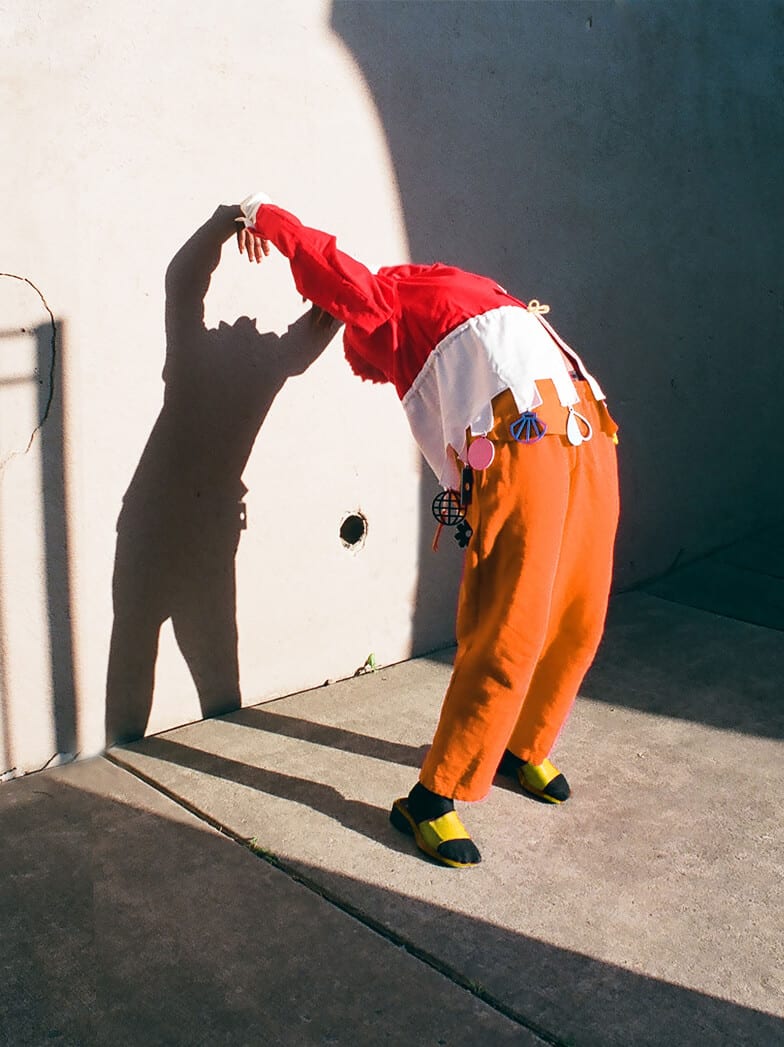 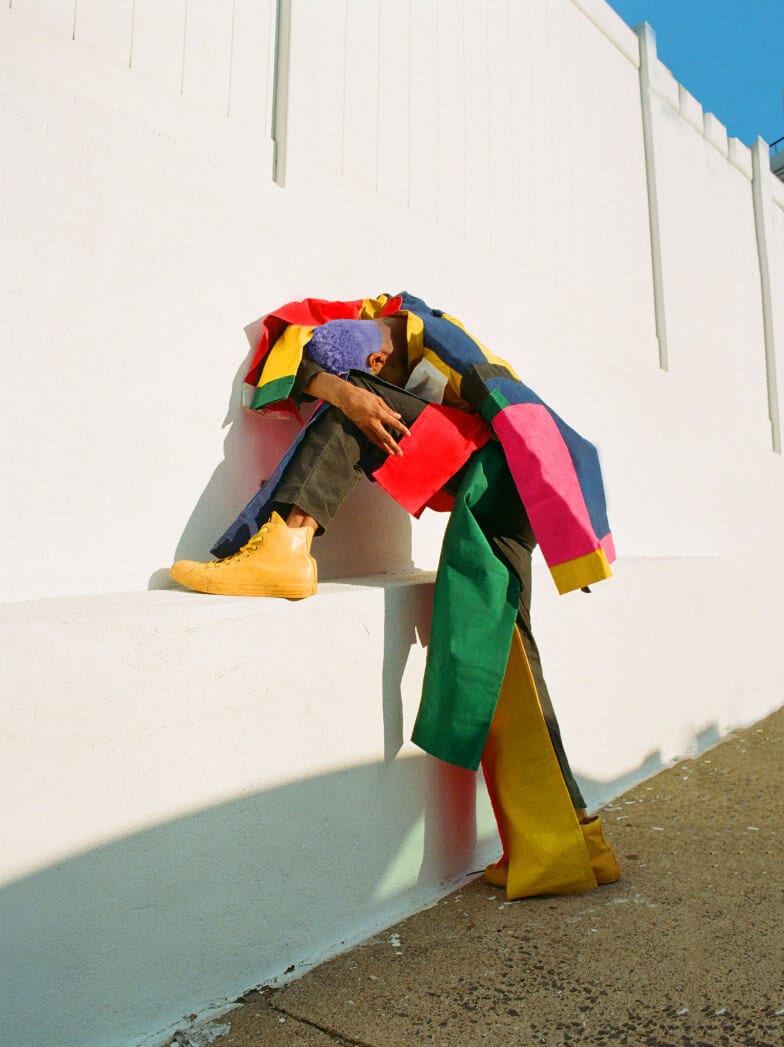 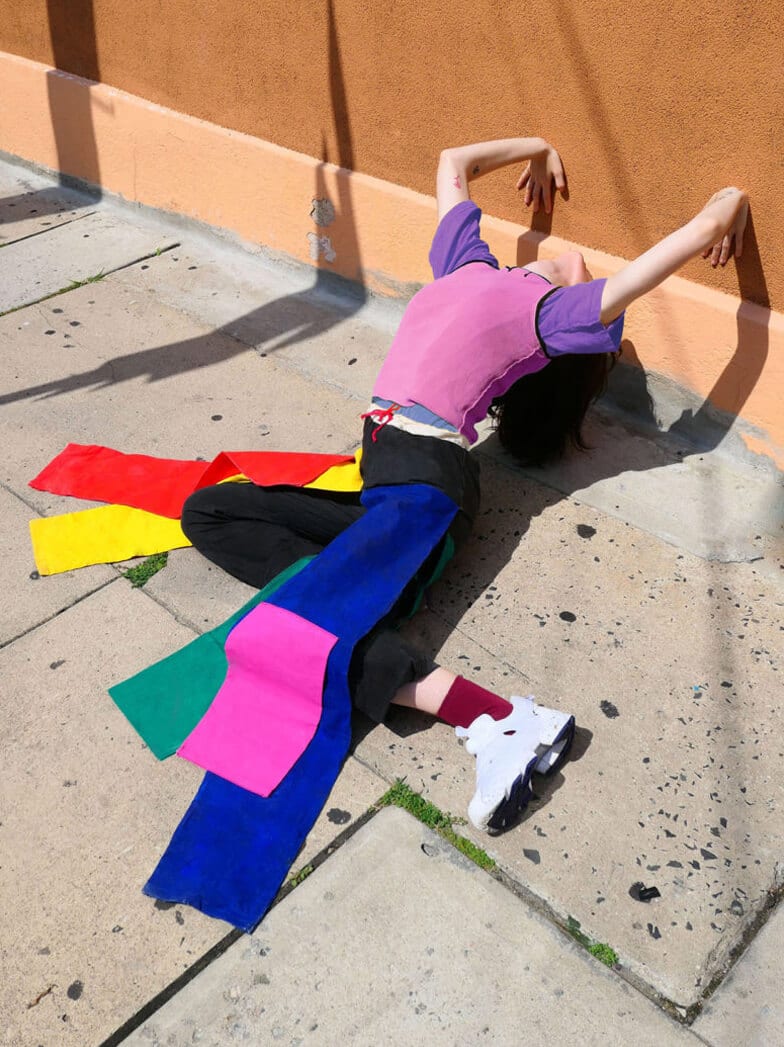 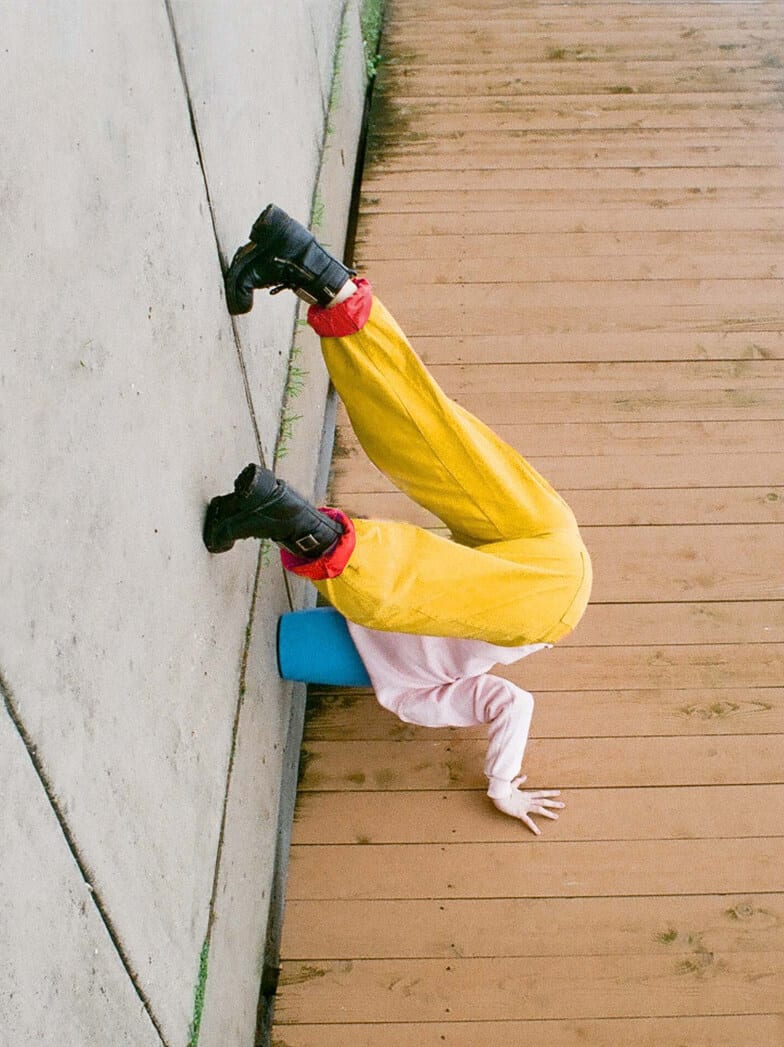